Posted by Jason Ingolfsland on Monday, November 20, 2017 at 12:00 AM By Jason Ingolfsland / November 20, 2017 Comment
It's pretty obvious by now, Thanksgiving Day doesn't have the greatest selection of movies. Name your favorite Thanksgiving movie and you'll likely land on Planes, Trains, and Automobiles. After that, it'll be a struggle to come up with something else. Now, Planes, Trains, and Automobiles is a great movie, don't get me wrong. It's one of John Hughes' finest. But, we need more than one Thanksgiving movie.  Since Hollywood isn't likely to make any, it's up to us to dig through the mass collection of movies at our disposal. It seems to only make sense to pick from the movies with the best meal scenes. So, skip the football game this year and fire up your movie player of choice. Here are 10 movies with memorable meals.

10. The Hobbit: An Unexpected Journey

Whether you loved or hated The Hobbit Trilogy, it's hard to deny the first in the trilogy, An Unexpected Journey, had one of the best meal scenes in a movie. Dishes and food were thrown around like a juggling act and those dwarves sure do know how to prepare a feast. Plus, Hobbits love food and would likely consider Thanksgiving the best holiday of the year. 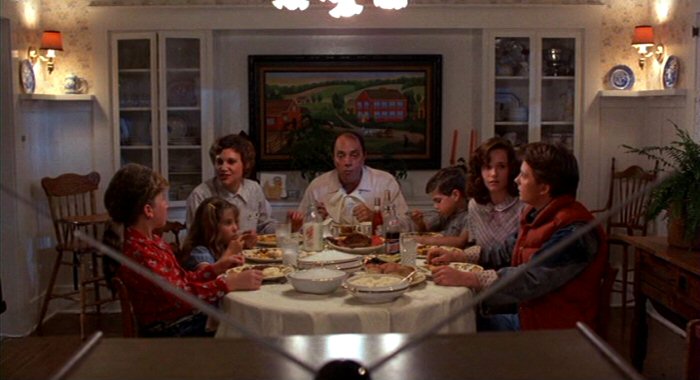 9. Back to the Future

If you'll recall, Marty McFly has two meals with his family. One in the beginning when he eats with his present-day parents, brother, and sister and the other is when he goes back to 1955 and eats with his mother's family. The way both meals juxtapose each other is great. Marty's present family is like a depressing, miserable portrait from a David Lynch film. In 1955, things are a much more formal and pleasant. One thing still remains, both families watched the Honeymooners. 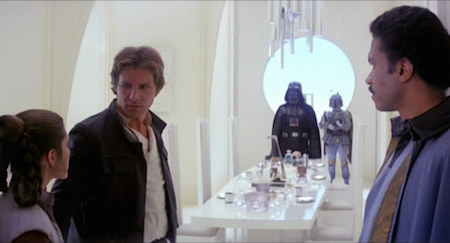 It's not the longest meal scene in a movie. They don't even sit down to eat before it's over. Yet, it's still one of the best movie meal scenes of all time. Han Solo, Leia, and Chewbacca are following Lando as he guides them through Cloud City. When he reaches a door and opens it, Han Solo shoots first at the sight of Vader. Like a boss, all Vader does is block the blasts with his hand and rips Solo's gun away. No, it's not the most welcoming meal for Thanksgiving but it sure is memorable.

The first time I watched The Matrix (and the many other times after it), the two meal scenes always struck me as interesting. In the first scene, Tank pulls a lever and a gross stream of brown glop comes out into a bowl. He puts the bowl in front of Neo and calls it breakfast of champions. By the look of it, it's not. They hammer this home with calling it, "Runny eggs" or a "Bowl full of snot." Afterward, Mouse goes into a monologue about "Tasty Wheat." In contrast, in the second meal scene, we find Cipher savoring a juicy piece of steak while he eats with Mr. Smith. It's a small touch but it perfectly showed how living in "reality" won't be comfortable. 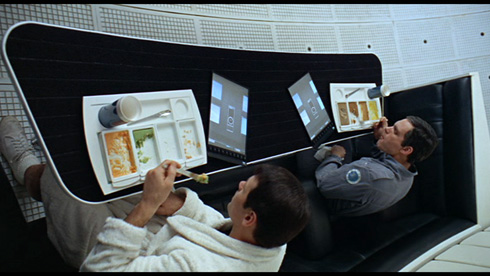 Honestly, 2001: A Space Odyssey is just one big meal scene. From the very beginning, we find the apes killing and eating. It's so violent, nasty, and disturbing, it makes a lasting impression. As the movie progresses, eating becomes civilized but the food is processed and fake. Watch the food the astronauts are eating near the end of the movie and its just different colors of paste. Most know 2001: A Space Odyssey is a long, slow-burn but if you watch closely, you'll find Kubrick stashed away many little gems.

5. Indiana Jones and the Temple of Doom

There are quite a few great meal scenes to choose from in Indiana Jones and the Temple of Doom. In the first scene, Indy does a trade with a Chinese mobster but discovers he drinks poison in the process. He has to trade back an artifact for the antidote. It's a great scene because it shows Indy in a different, more debonair, light. And, of course, the scene where Indy eats poop. Enough said about that. The best meal scene in the film is when Indy and his friends sit at the table in Pankot Palace. When the food is revealed, it's like something out of a cheesy horror movie but its done so well, it works. I'll never forget the "Monkey Brains." 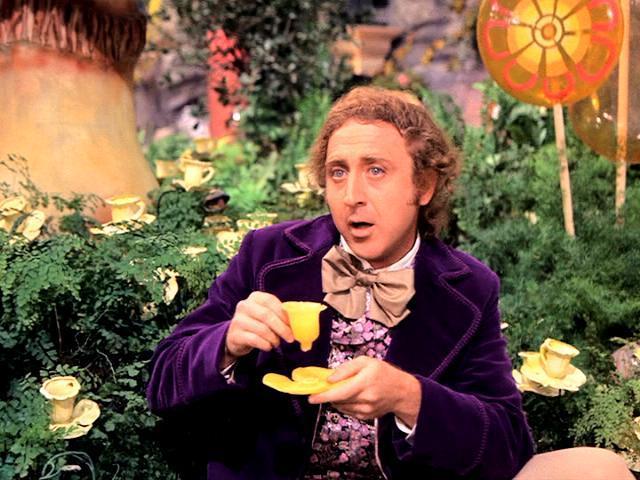 4. Willy Wonka and the Chocolate Factory

You can take your pick of all the great meal scenes to choose from in Willy Wonka and the Chocolate Factory. From Augustus Gloop falling into the river of chocolate to the slightly crazed Willy Wonka as they ride on the boat through the kaleidoscope tunnel, it's like a never-ending movie feast for Thanksgiving. 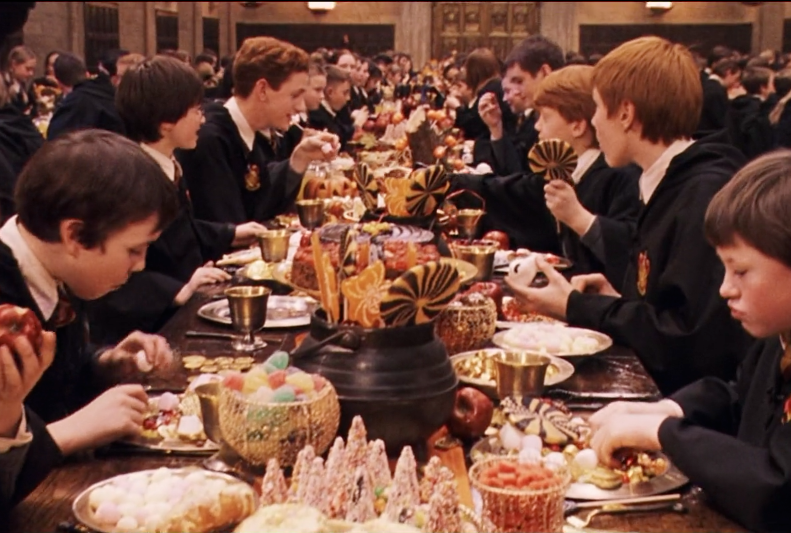 3. Harry Potter and the Sorcerer's Stone

Some might call Harry Potter and the Sorcerer's Stone more of a Christmas movie because of the Christmas scene but did we all forget all of their massive feasts? With how much they're eating on those giant tables, it seems to me this movie should be watched around Thanksgiving rather than Christmas. 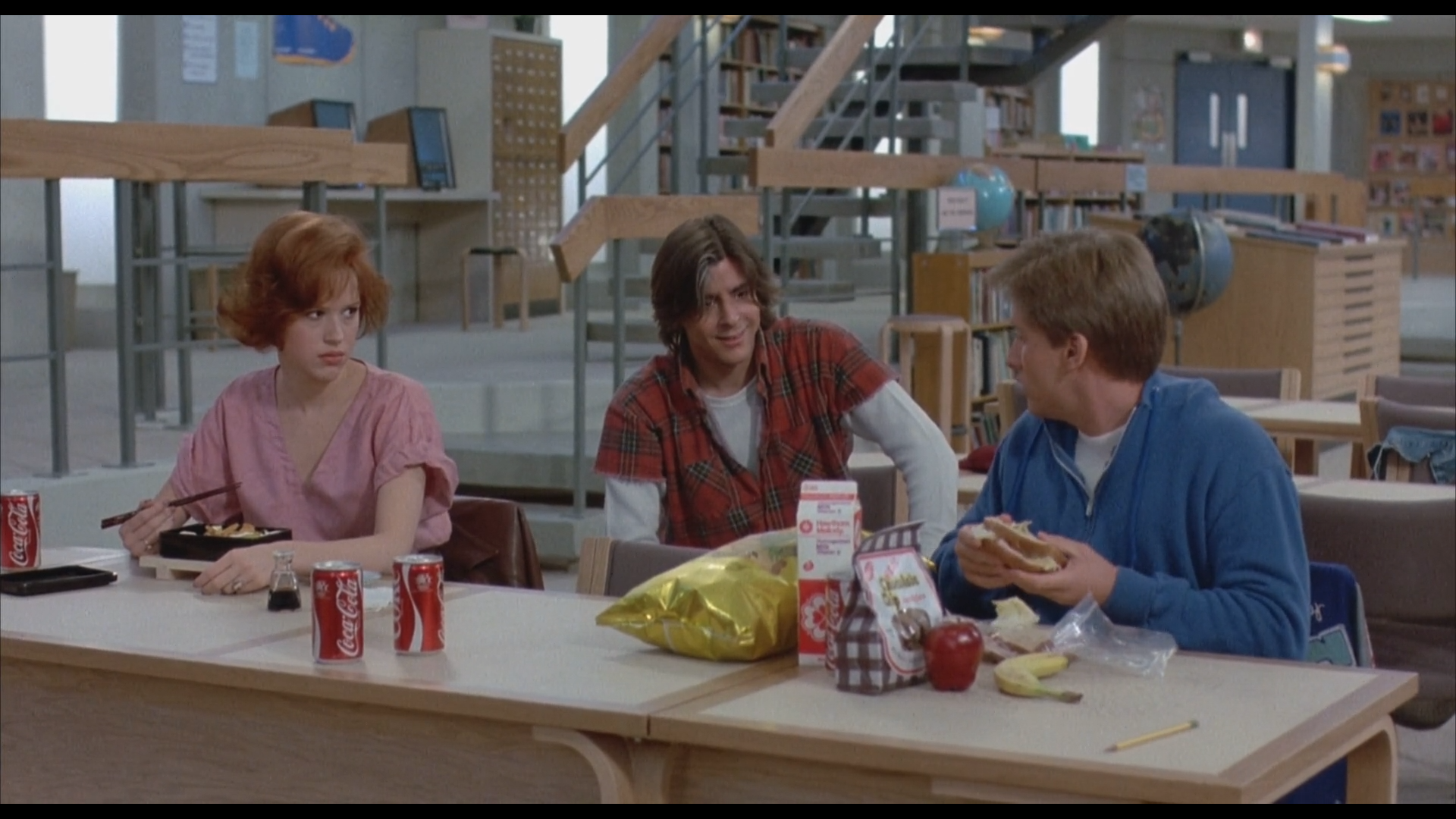 Planes, Trains, and Automobiles isn't the only John Hughes film for Thanksgiving. The lunch scene in The Breakfast Club is pretty much iconic at this point. Molly Ringwald is eating sushi, Judd Nelson doesn't have food, Emilio Estevez pulls out a big bag of chocolate chip cookies, a pint of milk and an overflowing tuna fish sandwich. Meanwhile, Ally Sheedy's character is pouring sugar and Captain Crunch on two slices of bread and chowing down. And then Anthony Michael Hall's character is berated by Judd Nelson for having a wholesome lunch full of all the food groups. It's perfect how Hughes uses food to define the stereotypes of his characters. Plus, the scene is just funny.

Out of all the memorable meals, the food scene from Alien always strikes me as legendary. The last thing anyone wants while they're eating is to get heartburn, nausea, or an upset stomach, much less an alien from another planet bursting out of their chest. It's disgusting and terrifying and likely not the thing you'd want to watch right after spending a Thanksgiving meal with family and friends. Then again, maybe Alien is to Thanksgiving what Die Hard is to Christmas.
Tags: Movies, alien, Best Thanksgiving Movies, dinner and a movie, Harry Potter, Indiana Jones and the Temple of Doom, movies and feasts, movies and meals, Movies with memorable meals, Movies with the Best Meals, Thanksgiving, Thanksgiving Day, Thanksgiving Movies, The Hobbit, Turkey Day