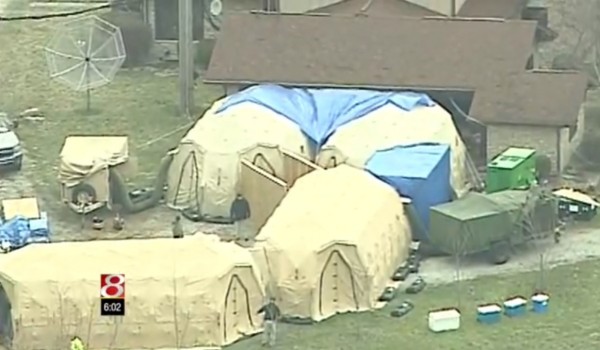 Don Miller, a 91-year-old teacher, veteran, and member of the Manhattan Project, has traveled the globe collecting artifacts -- all being compiled into an impromptu museum in the basement of his Waldron, Indiana home. However, the Federal Bureau of Investigation has taken over his home in order to examine and catalog each artifact. The FBI fears some artifacts may violate treaties, or may have been 'acquired improperly.' The collection has wowed many people. Andi Essex, one of the people lucky enough to tour the collection, recounts: "It's unreal... I had even asked him, ‘Can I bring my Grandpa? Can I?'" Essex was blown away by a full skeleton and mentioned her favorite was the piece of Hitler's bunker. The FBI believe several artifacts wowing friends and neighbors may be "relics of cultural patrimony in violation of several treaties federal and state statutes." (FBI Agent Robert Jones) They have set up a base outside his home and are going through the entire collection piece by piece. Miller has been nothing but helpful, having welcomed the FBI into his home, and constantly assuring the agents that everything is rightfully his. The FBI admits that most of the laws and statues from the last several decades (which prompted this inspection) may not have been in effect when Miller purchased the artifacts. The main goal, according to the FBI, is to return everything to its rightful owner, even if that owner is Don Miller. Photo via: WISH-TV
Tags: Don Miller, News