A Controversial Nazi Party at Gastof's and the Surrounding Backlash

Once, several years back, I attended a Halloween party with some friends. As I arrived, I noticed the parties' host, a good friend of mine, had a swastika armband on as part of a quarter-assed costume he'd thrown together an hour before his guests showed up. I remember my stomach sinking when I saw it. I knew this guy well — he was kind and generous person. I knew there wasn't an ounce of anything resembling Nazi-support in him. His costume was at worst an indication of his naivety, immaturity and one thoughtless decision, not evidence of calculated bigotry or deep-seated darkness. I'd known him 20 years — he was being stupid, not hateful. To my best recollection, after a few minutes of party arrival pleasantries, I pulled him aside and said something like:

"Dude, you do not want to be wearing a swastika armband. I know you don't mean anything by it — it's just a incredibly dumb and offensive costume idea — but someone is going to get a picture of that with their cellphone, it's going on Facebook, and you'll won't live it down for a long time."

I don't remember if I said this to him or not, but I also remember thinking:

"You are a bright, kind, thoughtful person — take that horrible nonsense off so you don't give people who don't know you a reason to think otherwise. Use your head, man. Think."

I don't recall if he took it off right away based on my advice. I have some pictures from that party and I don't see his ill-conceived armband anywhere in sight, so as far as I know he made a good choice and removed his bad costume decision soon after I said my piece.

That story from my life came to mind immediately when I first read about the controversy that erupted last week surrounding Gasthof's, a restaurant in Northeast Minneapolis. If you aren't familiar, here is the quick rundown: • On March 17th, City Pages published a photo showing a group of party-goers at local restaurant Gasthof Zur Gemutlichkeit dressed in German army uniforms surrounded by Nazi flags. • On March 18th, more photos showing swastikas and other Nazi-themed decor from the same party reportedly emerged on Reddit, and were published on City Pages. • Also on March 18th, the Star Tribune reported explanations from the January 20th party's "organizer" as well as Gasthof’s owner. Quoting from Star Tribune on the party's reported organizer Scott Steben:

"By no means do we glorify the edicts of the Third Reich," said Scott Steben, who characterized himself as a history buff who has landed movie parts as a German soldier. "I understand the sensitivity of the subject matter and everything but it did occur and it is history." He said the group screens out neo-nazis or anyone with a criminal record. He also defended the practice of wearing German uniforms, likening themselves to fans who dress up as Star Trek characters. 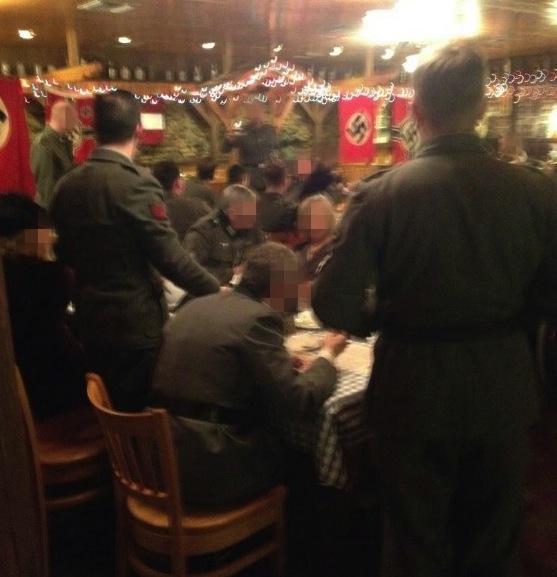 Pierzchalski said he’s hosted the party for six years but won’t host it again. He defended the people who attended it, who included men dressed as Italian soldiers and one as an American soldier. "Those people are very peaceful people," he said referring to the party goers. "They are not any politicians or any against politics or against the parties here. They are just actors." ...Pierzchalski said he doesn’t believe in Nazism but cherishes the freedom he found in the United States when he emigrated here in 1993. He said he’s been taken aback by the hostile reaction many people have had to the party, including threatening online comments and phone calls to the restaurant. "So now we have a lot of bad messages on our phones; they want to burn down the building," he said. "We live in a free country... but from the comments I see, a lot of people they don’t see what freedom is. If I break the law, punish me. But we did this for so many years and everything was fine." 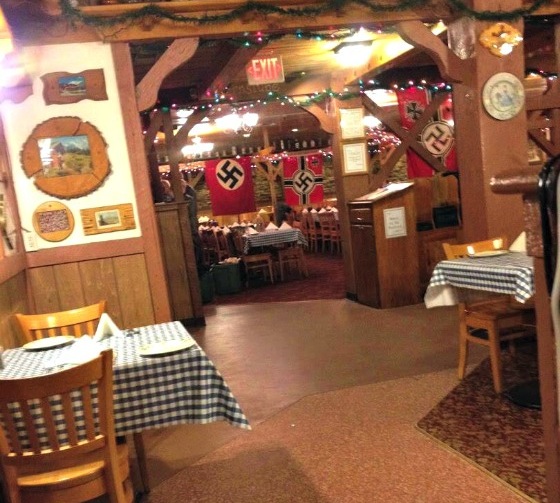 • On March 19th, the Star Tribune published the following apology from Steben:

"On behalf of everyone who participated in a World War II reenactment dinner last January, I apologize. We understand that some of the items we displayed at the dinner have made people feel uncomfortable. That was not our intent," Steben said. "We are currently reviewing our practices so that in the future our members will be more mindful of the unintended effects of the materials we display."

• On March 20th, City Pages posted more public photos from Steben's Facebook page showing him with an "SS tattoo" and "wearing a jean vest adorned with an Iron Cross, eagle-and-swastika, and an epaulet with a silver button." There is also a picture of him "dressed as an SS officer with SS bolts in the background." ** This whole story is sad and frustrating. I'm a big free speech guy — huge advocate. And I tend to think "political correctness" is often misguided and has gotten (way) out of hand. 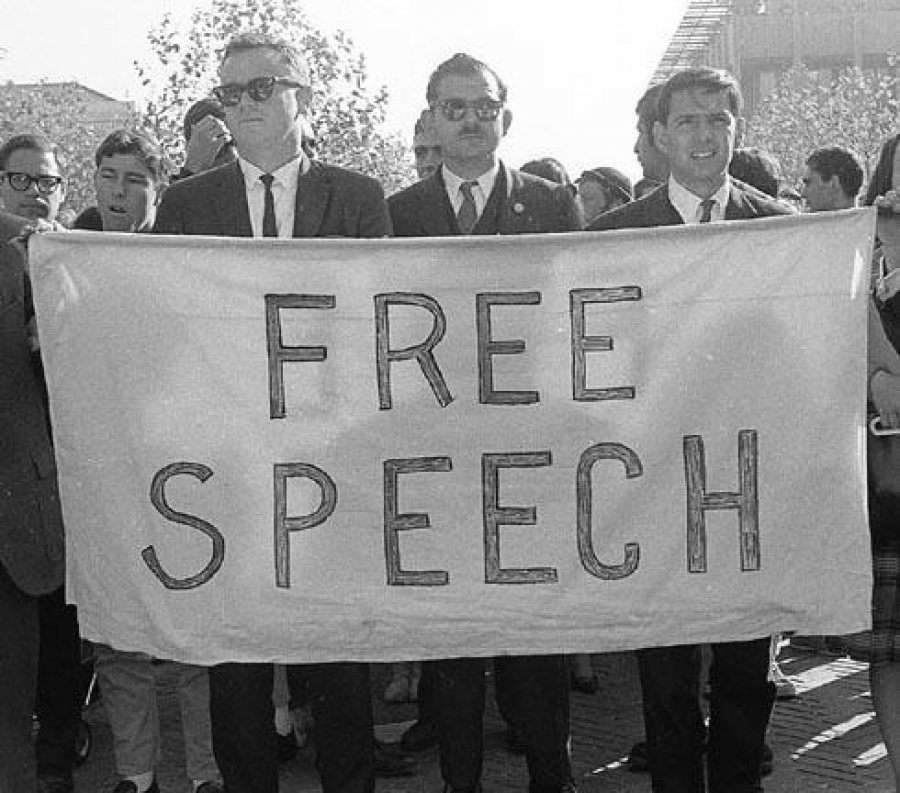 One of the many reasons I love this country is because its citizens are allowed to think, speak and express themselves in nearly any way they choose. As Americans, we have this powerful ability to enter the public forum and call things like we see them, even if others disagree — and even if we are dead wrong. This freedom provides all citizens the ability to be heard and also to hear the free voices of others — it's a big part of how we all learn and grow. Sometimes, this right to freedom of expression is used to accomplish wonderful, creative and inspiring things. Other times it's used to mock, belittle or hurt others. And then other times, it's used for blatant hatred. Was the January 20th party at Gasthof’s merely a WWII themed gathering of sincere historians of the globe's most consequential conflict, as Steben and Pierzchalski say? Was it a group of otherwise good-hearted people who made some naive and thoughtless costume and decoration decisions one time at a ill-conceived costume party? Or was this some sort of calculated, hate-filled, ideological/political statement of neo-Nazism at its worst? 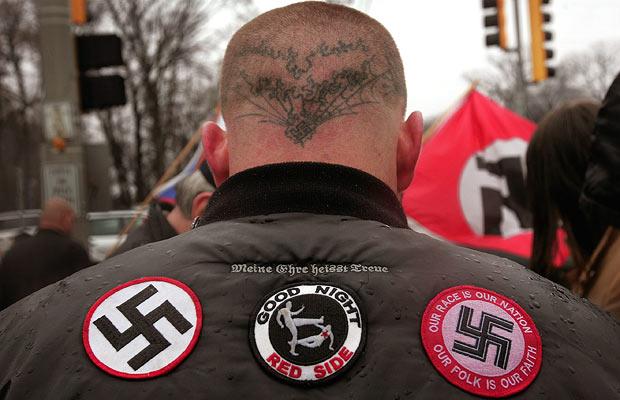 I don't know. And I don't know if we can know. Of course, there is no way to peer inside peoples’ heads to gauge their intentions. At first, I was inclined to give these guys the benefit of the doubt. Maybe it was just a relatively innocent, historically-based reenactment that looked really bad in pictures and was being misunderstood due to a lack of context? That sort of thing happens quite a bit on the Internet, after all. I mean, as unnerving as it is to see giant swastikas displayed, that hateful symbol is an (unfortunate) part of real history. And, if these guys are re-enacting real history, then I guess swastikas are a part of that. As I've read more — watching the story evolve and new information come to light — I'm personally having a harder time believing pure naivety, or appreciation of history, is what's happening here... That said, I'll make no final judgements. It's not my place and, frankly, I'm sick of reading about this story. I try to avoid thinking and writing about swastikas, Nazis, etc. as much as possible — it's too depressing — and I’ve exceeded my personal quota for the year in pondering this particular controversy. From where I stand, I'll give whatever remaining benefit of the doubt exists to all involved. Instead of judging the intentions of people I’ve never met and whose minds I cannot read, I’ll use my freedom of speech to say what I think about the consequences of the act of expressing one's self in such a way — with swastikas and the like — regardless of intention. If they are merely naive and unaware to how bad this appears, and this whole Nazi-looking party is just one big misunderstanding, then my advice to those who attended that party would mirror the advice I gave my friend back one Halloween:

"Ladies and gentleman, you do not want to be wearing Nazi SS uniforms and attending parties with giant swastika flags draped on the walls. Perhaps you don't mean anything by it — it's just a really dumb and offensive party idea — but someone got pictures of that party with their cellphone, and now it's on City Pages and the Star Tribune, and it's caused a giant controversy and upset lots of good people."

To Gasthof's owner I'd say something of a similar sentiment:

"You own an apparently cool, popular, successful German restaurant — stop hosting parties using such horrible, nonsense themes and decor so you don't give people who don't know you a reason to think otherwise. Use your head, pal." 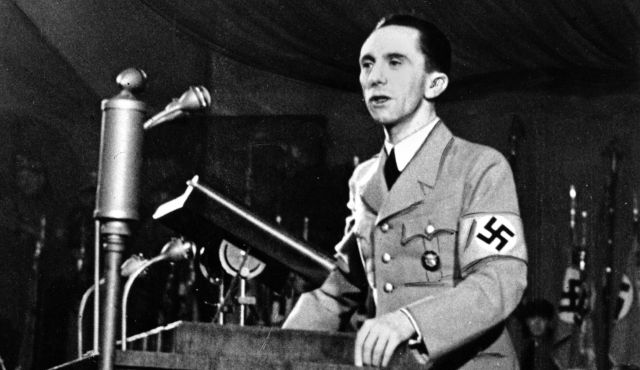 And if it's worse than that, if what the pictures depict is a group of people using their free expression to knowingly celebrate one of the most evil and murderous regimes in the history of mankind, then, I’d like to use my free voice to tell those people as loudly and boldly as my editor will allow:

"You are ignorant and wrong. Stop it. We're trying to have a peaceful, cohesive society here — overt displays of hatred aren't helping anyone. If we are going to make this whole Earth thing work, we can't have large groups of people believing other large groups of people are inherently bad and worthless based on their culture or ethnicity — that is, and always has been, a harmful failure mode for humanity. Knock off all the radical, ideological nonsense and get a hobby that doesn't involve dressing up like war criminals. Try talking to someone about your anger. Try prayer. Try yoga. Try knitting. Try anything that will help you not hate people. Thank you."

As Holocaust survivor and Nobel Peace Prize Winner Elie Wiesel said of our individual duty to speak up in the interest of all others:

“I swore never to be silent whenever and wherever human beings endure suffering and humiliation. We must take sides. Neutrality helps the oppressor, never the victim. Silence encourages the tormentor, never the tormented.”

I'm with Weisel. Speak up when you see injustice and bigotry in any form. Speak up for all of our sake. In America, it is our right to believe in, and express, nearly any idea that we choose. If some will use that free expression to espouse the edicts of ignorance, oppression and hatred, then those of us who oppose such evils ought not be silent in voicing — with clarity, conviction and due respect — just how wrong and terrible we believe those ideas to be.   Photos via: City Pages -- Google