A Wisconsin Perkins Experiences a Break-in, From a Deer 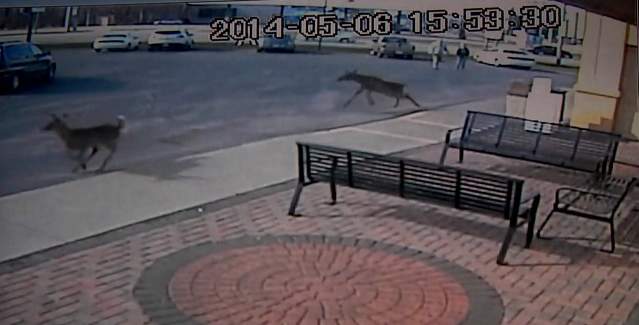 The Perkins restaurant and bakery in Shawano, Wisconsin had an unusual visitor, who entered in an unusual way. A white-tailed deer managed to smash its way through the restaurant's front window (during business hours) and leave just as quickly as it came. Surveillance footage shows two deer running about in the Perkins parking lot, and one eventually making a run for the window. A waitress, surprised by what she though was a gunshot, was then further surprised when a deer appeared out of 'nowhere.' WAOW - Newsline 9, Wausau News, Weather, Sports No person was injured during this event Monday night, but managers claim that the deer might have been injured. However, the deer responsible for this hit-and-run of a restaurant has not been seen since. Photo via: Green Bay Press Gazette
Tags: News