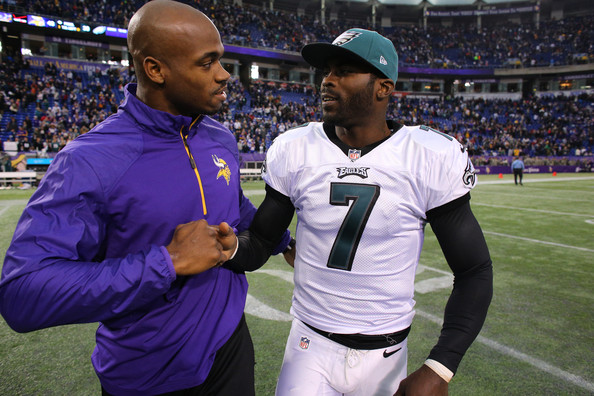 In an effort to rouse public support via social media, Minnesota Vikings running back Adrian Peterson claims free agent quarterback Michael Vick will "make the Vikings a playoff team." If the Vikings management even mildly agree, they should sign Vick immediately. Perhaps visions of the 1998 Vikings team and quarterback Randall Cunningham will come to mind when the Vikings brass sit down to analyze the possibility of bringing in Vick. The signing of Cunningham in '98, another former Eagles' quarterback, created one of the most prolific offenses in the history of the NFL. Of course, the reality is, it would take more than just Vick to turn last year's (5 - 10 - 1) Vikings squad into a playoff team. For instance, how about strengthening the secondary? And the ability to close out a game? Vick (34) is clearly past his prime. However, his athleticism isn't completely gone. He can still scramble from the pocket better than most quarterbacks in the league. His accuracy isn't top notch, but his ability to throw the deep ball is above average, which would be welcome news for rising star and Vikings wide receiver Cordarrelle Patterson. Vick hasn't played a full season of games since 2006. And in 30 games over the past three seasons he has been fairly average, with a quarterback rating at about 80 and more turnovers (38) than passing touchdowns (35). As it stands now, Vick is unquestionably better than Christian Ponder, who is currently the only Vikings quarterback on the roster. Signing Vick would increase their chances of having a successful season in 2014 if the only other option is Ponder. And if Peterson, the most prized weapon the Vikings have, is in favor, the Vikings should sign Vick today.   Photo via: Google
Tags: Adrian Peterson, Michael Vick, Minnesota Vikings, Sports