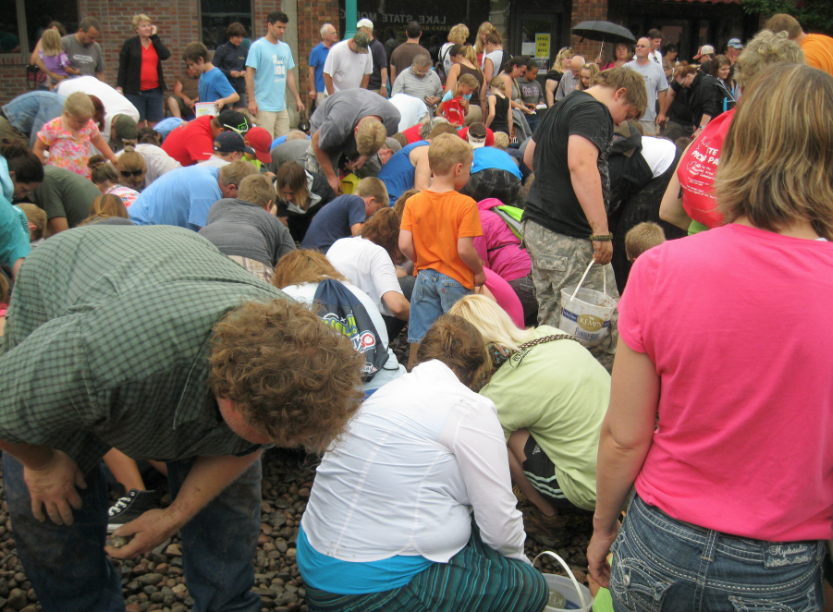 A large crowd was left to wonder “what if?” after a mishap sent Agate Days into chaos and confusion.[/caption] As the rocks crashed from a large-flatbed truck onto Elm Avenue in downtown Moose Lake, an overweight teenager with a mullet haircut and oversized glasses clenched an empty pail that hopefully would soon hold a load of agates. “Now?” he asked to presumably anyone who would listen. Nobody minded the statement and the child continued to freakishly look up and down the crowded street. Mobs of humans blocked off by flimsy police tape stood as thick as the timber in nearby forests. More than 500 pounds of wet, dirty rocks decorated an otherwise empty Elm Avenue. In the background, the strange sound of The Beatles singing “Yellow Submarine” could be heard eerily playing from a loud sound system. People with crazed grins were everywhere. It was a scene straight out of a Stanley Kubrick film. 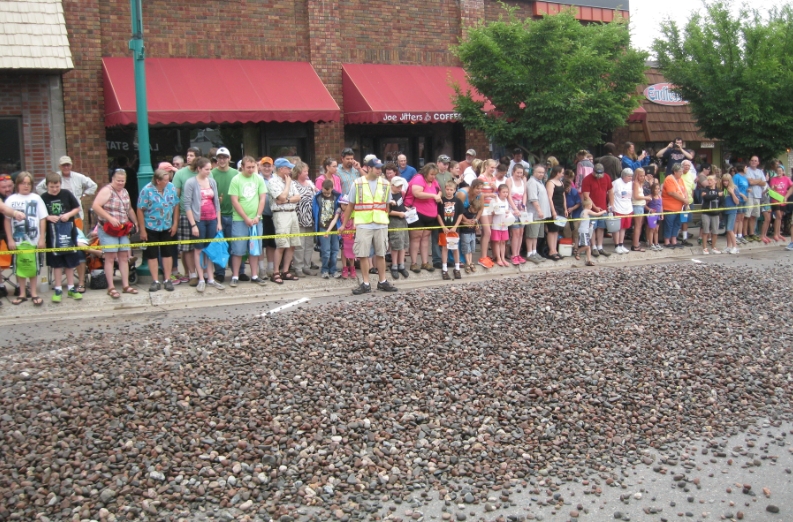 Suddenly, a mighty blast from some unseen cannon signaled the official start of the much-anticipated rock stampede. This was to be the highlight of the Agate Day Festival held annually in Moose Lake. For most people, it turned out to be the biggest letdown of the weekend. The Agate Day Festival has been around for 44 years and attracts crowds throughout the state and region, according to the Moose Lake Chamber of Commerce. Events at the festival are centered on agates, commonly referred to as Minnesota’s gemstone. In short, agate enthusiasts come to view, trade, buy, sell and talk about what they know best: rocks. The biggest draw to the festival is the rock stampede, where people of all ages are given the chance to find and keep free agates. For some reason, 25-cent coins are also added to the rock mixture dumped onto a downtown street in Moose Lake. 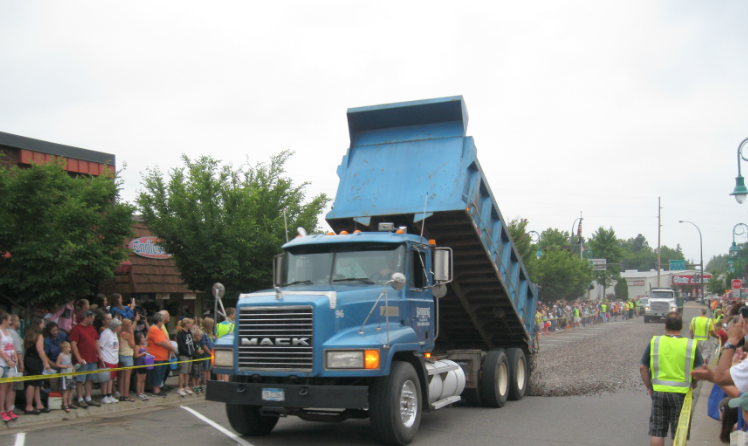 The goal during the stampede, according to an event schedule and dozens of volunteer staff, was to drop two truckloads of gravel mixed with agates and quarters along a two-block stretch of Elm Avenue. The first truck was able to do so with success, as it dropped it an even spread of the rock and coin mixture onto the street. However, when the second truck went to unload its cargo, the weight of the load snapped free the back gate prematurely, dumping its load on top of the previous spread. The mistake left only one block of city street covered with rocks, agates and coins rather than two. What ensued was sheer chaos. After the cannon fired, a hoard of confused and seemingly belligerent mass of children, rock hounds, savages and mothers broke through the yellow police tape and swarmed upon the contents dumped by the trucks. What had been a crowded, yet well-distributed crowd covering two city blocks now converged on an area covering approximately 25-yards in length and 3-feet wide. People staggered across the loose rocks outside the main pile like drunkards charging toward the bar on last call. Elbows were thrown. Fingers were stepped on as people reached for anything that resembled an agate. The roar of chaos and confusion drowned the Beatles’ music into oblivion. 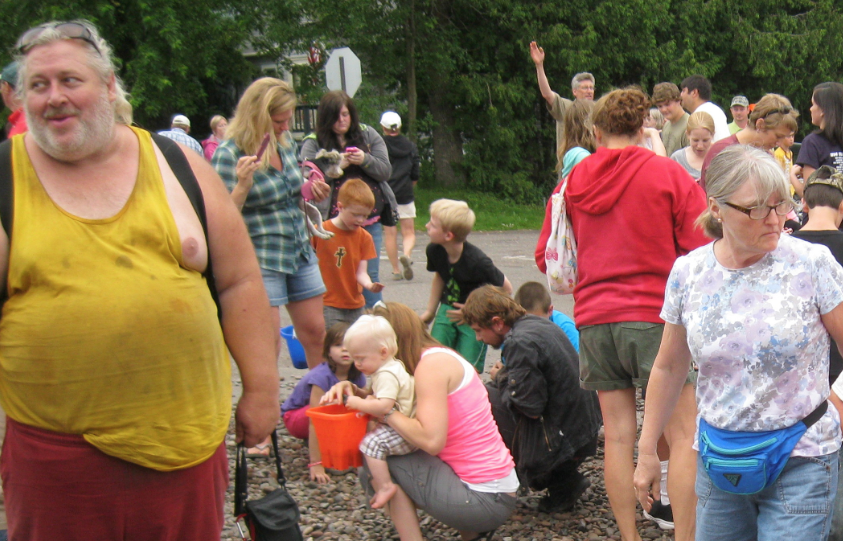 After several minutes the initial energy drained from the crowd. People looked pitifully up and down Elm Avenue. The narrow, thick wall of rocks that resulted from the premature dump made it difficult to find agates and coins. Complaints of people with terrible body odor could be heard. Combined with such a fierce crowd of agate seekers, tempers flared and no mercy was shown. “This sucks,” a grown man with a moustache shouted from atop the knee-deep pile dumped on Elm. A group of Agate Days staff stood in a half circle near the mad scene. They voiced their displeasure with the man who accidentally dropped the rocks too early. “I know he’s a local,” a volunteer said of the truck driver. “We can categorize this under the ‘oops’ department.” In the end, few people walked away from the Agate Days Stampede with a smile on their face. Most souls had a look of defeat and utter disappointment. An overcast, gray sky shone no light upon the thousands of seemingly meaningless stones still scattered along Elm Avenue. Apparently the premature dump from the second truck made finding the agates and quarters difficult, if not impossible. The rocks were too dirty to indentify. The crowd was too fierce and congested. It all went wrong. On the opposite side of the street from where he stood prior to the cannon’s firing, the teen with glasses and a mullet stood next to an elderly woman. He neither smiled nor appeared to have any interest in the events that had just occurred. When the elderly woman asked if the rocks inside his now half-filled container were agates, the prize gemstone of Minnesota, the bewildered teen was quick to respond. “I might have a couple,” he said, as he started to walk away. “Where did we park?”   Photos by: Joseph Friedrichs
Tags: 2013, Agate Days, Agate Days Festival, Events, Moose Lake