Another Shooting at the Navy Yard in Washington D.C. -- What is Wrong With America? 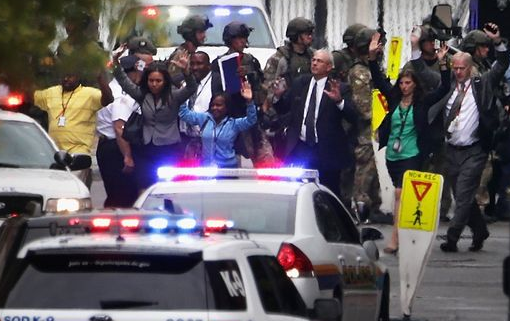 Just today another shooing happened at the Navy Yard in Washington D.C., a place in close proximity to the White House itself. Police have now confirmed at least twelve are dead. Three men are believed to be involved in the shooting, with one dead and the other two on the run -- the men were reportedly dressed in military garb. These cowards hit a lot of bystanders as they opened fire on the crowd, fatally wounding twelve as of now. The building targeted was the Naval Sea Systems Command, a military headquarters which purchases, constructs, and maintains the water vessels for the Navy. Around 3,000 people work at the location, a significant number of those civilians. The tale of what happened is still a bit murky, but one thing is clear: another mass shooting has taken place on American soil These shootings continue to happen on a relatively frequent basis, almost to the point where the public becomes desensitized to the fact. Not to the point where it isn't tragic, because it is, but to the point where it's hard to keep all these attacks straight. These shootings are no longer rare -- Americans have moved past the point of shock or surprise and onto angered disbelief. Why do these insane people feel that this is something worthy of their time, and ultimately their lives? Of course, trying to understand someone who would do this is a lot to grapple with anyway. It's just not fair -- why are so many bent on taking the lives of innocent bystanders? Why kill twelve innocent people? It's one thing to do something stupid, but it's a whole different story when you take so many others down with you. Today is another tragic day in America -- another shooting for the books, more people slain, and of course, much more debate on the topic of guns and the Second Amendment. Photos via: Getty Images