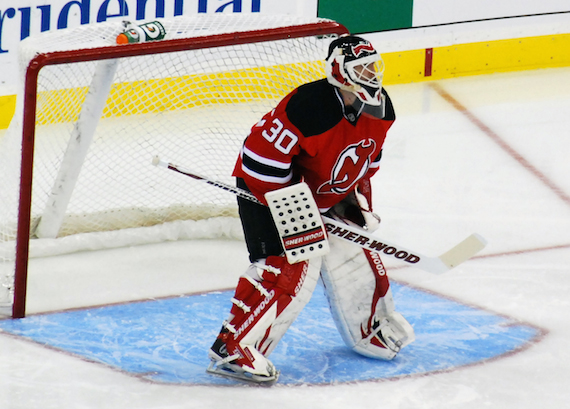 According to a late-breaking report, the New York Daily News has a source telling them legendary New Jersey Devils' goaltender Martin Brodeur will be traded to the Minnesota Wild prior to Wednesday's NHL trading deadline. Brodeur — who has played 1,249 games for New Jersey — reportedly wants to play one more home game before joining the Wild. Such requests to play, risking injury, while trades are pending are certainly unorthodox, but Brodeur has a no-trade clause in his contract and thereby presumably holds some leverage to do what he pleases. (He also happens to be one of the most loved, valued and respected players in Devil's history, and I think it's fair to conclude they owe him this chance if he wants to play one more in front of the home faithful.) The future Hall of Famer has played his entire 21-year career in New Jersey, winning three Stanley Cups and becoming widely regarded as one of the greatest goaltenders in the history of the game. By the way, the Wild told the Star Tribune that no deal from Brodeur is in place. I guess we'll find out how good the Daily News' source is soon enough — the trading deadline for the 2013–14 NHL season is set for March 5, 2014, at 2 pm CST.   Photo via: Google
Tags: Martin Brodeur, Minnesota Wild, Sports