Caregivers Harsher to Children When Absorbed With Smartphones

In the past few years we have all started to experience the phenomenon that I call “screen-silence.” This is when you realize that your previously chatty social situation just went mute due to smartphone and tablet screens stealing the collective attention. One member might wake into an awareness of the moment or an outsider entering into the mix might chastise the group, but the untold truth, that this will happen again and we are powerless in the matter, lingers. Although “screen-silence” might seem rather benign when referring to a moment at a party or a simple visit, a new study points out that parenting (or other child care-giving) suffers from it. 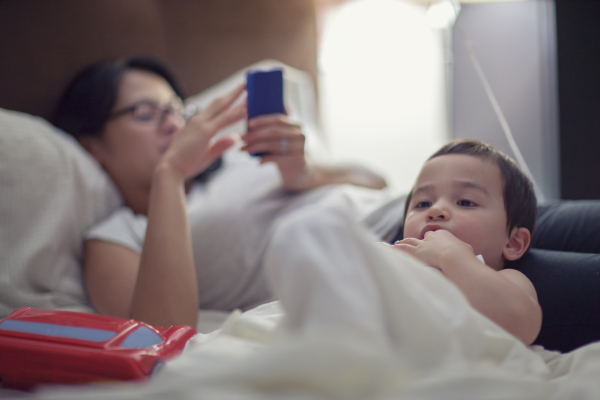 This might not come as any surprise to parents who fully appreciate the value of face-to-face conversation and engagement with their children, but several features of the study stand out: 16 out of 55 caregivers observed (who were sharing a meal with children at a fast food establishment) seemed totally absorbed with their smartphones; some of the accompanying children accepted the lack of attention while others acted out (in an obvious attempt to get the adult’s attention) resulting in their caregiver continuing to ignore them or (if they persisted) scolding them harshly (sometimes doing so without looking up from their phone). Child experts generally agree that it’s better to correct bad behavior than react to it. Unfortunately, smartphones appear to make caregivers into reactors rather than correctors. So as we hash out the new social rules and taboos of these wonders of technology, keep in mind that being a caregiver means more than just making sure your child doesn’t disassemble the condiment dispensers.   Photos via: Getty Images
Tags: News, Technology