Conan O'Brien Unveils the Sad State of the Mainstream Media 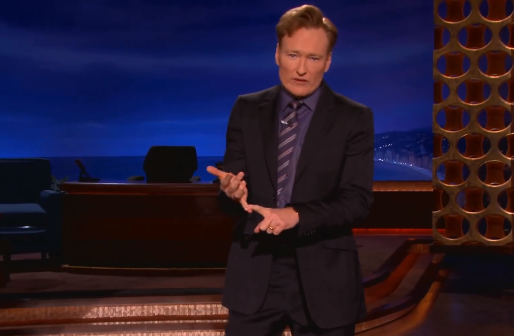 If you've ever wondered just how bad reporting has gotten from the mainstream media, especially all those local "cookie cutter" newscasts that are catered to a city-wide audience, look no further than Conan O'Brien's latest joke about the media. This video shows how these newscasts, and how many other media outlets like them, report their news by following marching orders. In this instance, a ton of newscasts report on the same fluff story, and all have the exact same opening to the story. You should see it for yourself. Check it. Like I said, this is just a fluff story, but this just goes to show how unoriginal even local news has become. Almost all these outlets are under the umbrella corporations of NBC, ABC, CBS, etc., and this video showcases just how formulaic news casts have become in this country. Of course, this video is meant as a comedic piece, but it is terribly sad when you really think about it. Even though this piece isn't hard news, it proves that many stories are crafted at the top and handed down to subsidiaries. If this is one example, how many others are there like it? How many other times have these "local" outlets been given a voice by their parent corporation? All I have to say is, thank God for the Internet and the ability to seek out news on your own. Clearly these groups are not operating independently, but more following the marching orders of the master corporation. Image via: Conan O'Brien