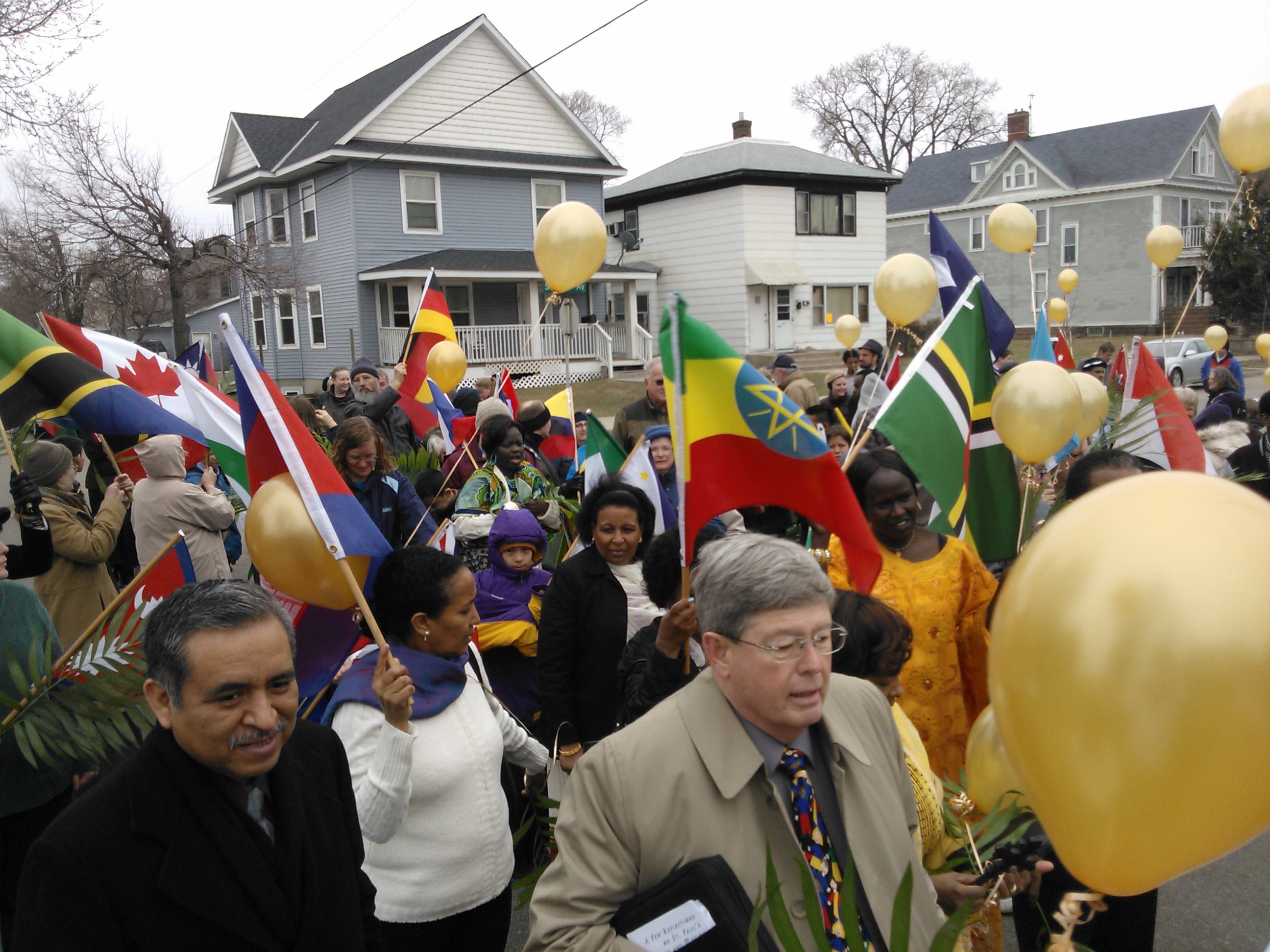 Reverend Roland Wells (Center) helps to lead the colorful march.[/caption] The historic and ironically named St. Paul's Lutheran of Minneapolis drew police and media attention this past Palm Sunday; fortunately the four congregations that share the 19th and Portland Avenue landmark church planned it that way. The cause? It's a long story, but it's worth the time to tell. In this case it's best not to start from the beginning... of the church that is. In 1964, or 50 years ago from last Sunday, the Lutheran congregation of St. Paul's had to move. They didn't have to move for any particularly complex, theological or abstract reason; they had to move because I94 was being built: cutting a physical scar between downtown and south Minneapolis. Their building was to be part of that scar and so they marched. Changing buildings had been part of the congregation's history since its founding in the 1860s (Minneapolis was quite small then); in the 1920s the congregation moved from what is now a vacant spot somewhere near the Mixed Blood Theater area to a larger building on 18th Street and 14th Avenue South (now a grassy slope on the right hand side as you go east on I94 and start your exit to go south on Hiawatha). The originally Norwegian immigrant congregation has weathered a turbulent fifty years since. It survived being in the heart of the Phillips neighborhood during the 1990s, it both joined and left the Evangelical Lutheran Church in America, it held on as whites (including those ethnic Norwegians) moved en masse to the suburbs and now stands firm as the near south side of Minneapolis is filled with new languages and cultures from across the globe. How? This past Palm Sunday went a long way in telling the "how" part of the story. In a police-escorted march from the site taken by I94 to their current home on Portland most of the songs heard were not in English or Norwegian, but rather in Afaan Oromo (one of the common languages of Ethiopia). You see though the congregation of St. Paul's only speaks English, its three partner congregations (who also use the same building) do not; Rev. Roland J Wells, Jr. (Senior Pastor at St. Paul's) explained his take on the situation:

There are a few places where God is doing things like this, but very, very few congregations have shown the ability to share their building like St. Paul's has.  Because the congregation has always taken over somebody else's "used" church, we have more freedom to share, not "our" church, but the church we are entrusted with at this time. 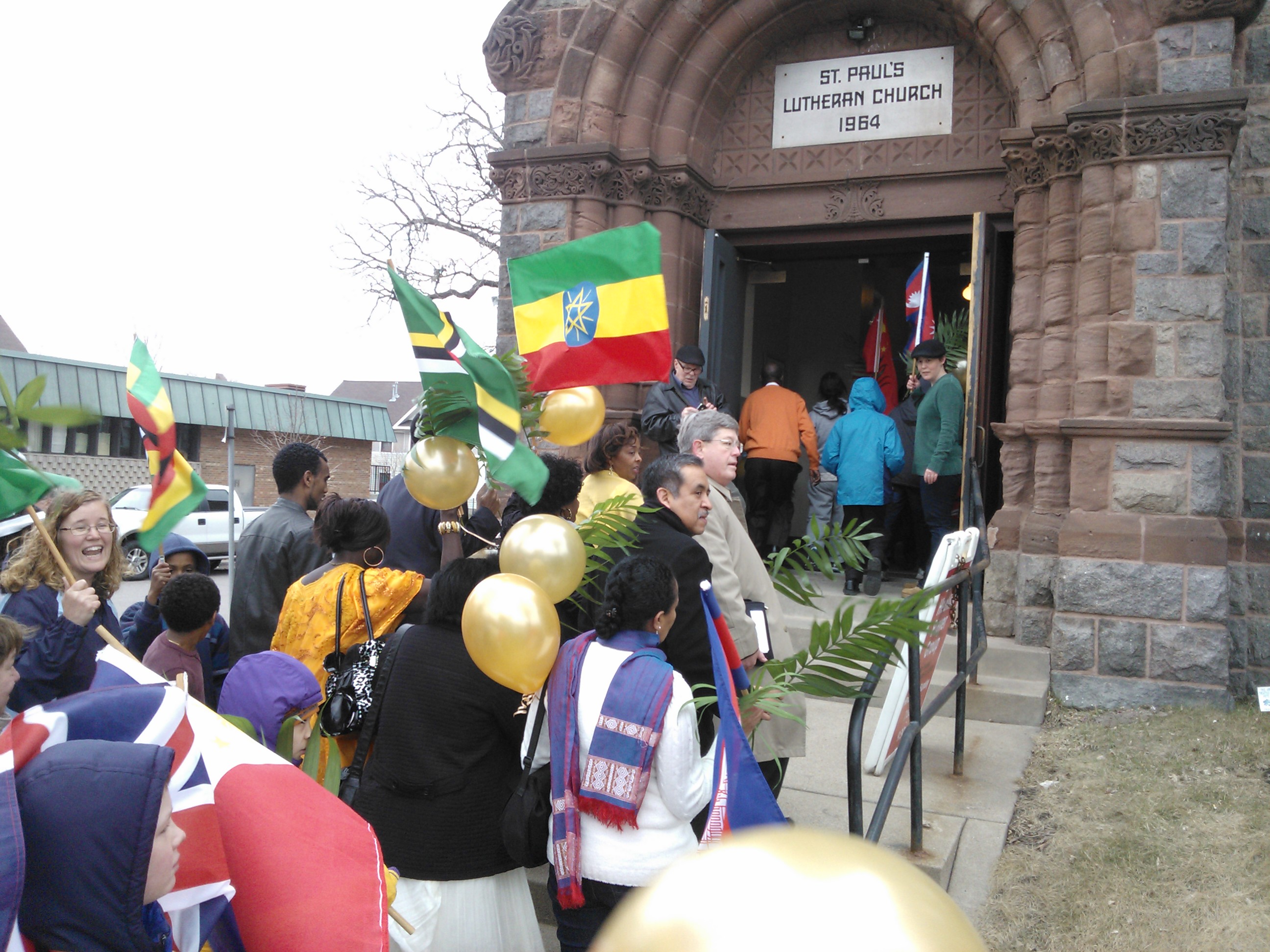 The Marchers arrive at the doors of St. Paul's[/caption] Strangely (or not so strangely if you study trends in population movements) the work of Lutheran missionaries over the past two centuries has boomeranged back to America in the form of immigrants. Although people groups such as the Oromo don't look like, talk like or sing like typical lutefisk-eating Lutherans, the beliefs they bring to America are the same as the Norwegians who founded St. Paul's; Rev. Wells explained the beliefs:

Lutheran theology is an ecumenical theology, in that it is not about a system or a hierarchical structure.  It is driven by the Word of God and seeks to bring people together around that Word.

At this point I'll go ahead and out myself as a Lutheran (yes I am that Minnesotan) and a member of St. Paul's. I will adjust the pronouns accordingly. I marched and photographed the long display of flags, balloons and palms. I stayed for the service where Mark Vander Tuig (Service Coordinator for Lutheran Congregations in Missions for Christ) gave the sermon. I enjoyed the Lutheran tradition of potluck in the basement but with authentic cuisine from Ethiopia and Latin America (the dishes paired wonderfully with hotdish). 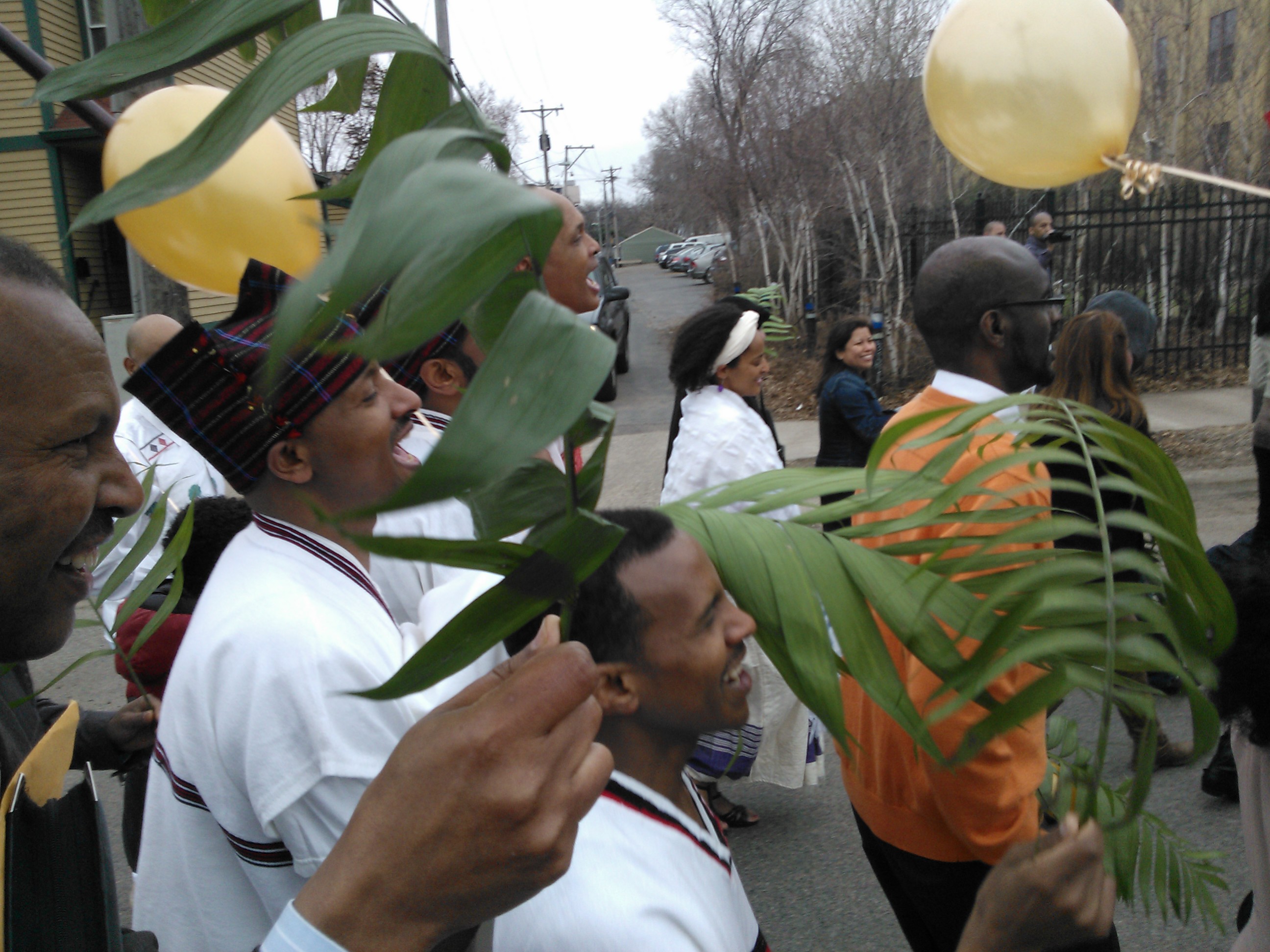 So although Easter is usually the highlight of Holy Week, this year Palm Sunday may have superseded it for me. The march along I94 seemed to parallel the direction of Minnesota. Even though the scars of the interstates may be on their way to being healed their constant movement will never cease. According to Rev. Wells this global diaspora has increased the Twin Cities' immigrant population from 100,000 to 800,000 in the past 20 years. We have a state abounding with fresh ideas, words, faces and uncertainty. But I realized, as we marched next to the interstate's scar on Minneapolis, that we were actually singing in the same language (and it had been sung when the march was made 50 years before). We were all on some level immigrants and outsiders trying to hold ourselves together in a changing and challenging world: trying to hold together without airtight systematic theology, without a spelled-out future and without fully understanding each other. All we had (and needed) was faith, hope and joy centered in God.   Photos by: Erik Bergs
Tags: Christianity, Downtown Minneapolis, I94, Lutheran, Minneapolis, Oromo Community, Religion