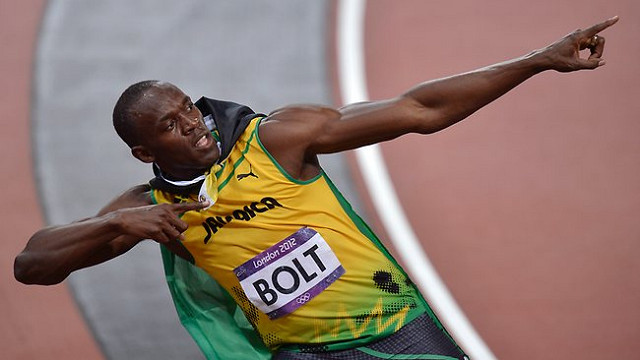 The Rio Olympics came to an end on Sunday, capping an interesting Olympiad which included mysterious color-changing pools, fake robberies and, despite Donald Trump's continued claim we don't win anymore, utter medal count domination by the United States of America. In case you missed it, one of the highlights of the Games, as usual, was Usain Bolt. On day 9 in Rio, the aptly named Bolt cruised to a victory in the men's 100-meter finals, capturing a gold medal in the event for a third straight Olympics and cementing his place as the official Fastest Man in the History of the Known Universe. Back here in the U.S., daytime talk icon Ellen Degeneres, who happens to be ostensibly the unofficial 'Nicest & Most Positive Person Ever,' took to Twitter to express her appreciation of Bolt's near-superhuman effort. She posted a picture of herself riding on Bolt's back during his gold medal-winning run as he flashes his iconic smile. Here's the tweet: 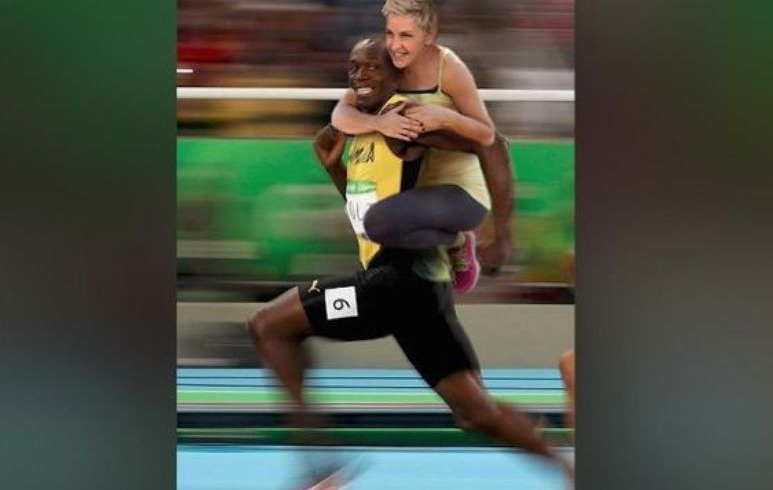 Predictably, the Internet found a way to make this into racism and be offended. Sigh. I'm sure you've read something about the resulting kerfuffle by now, so I'll say nothing more directly to you, my dear reader, on the issue. Instead, I'll be passive-aggressive like every good Minnesotan ought to be and write an open letter to those offended by Ellen's tweet. Feel free to read along.

Dear Offended Internetters, You are wrong. Let me explain how in the simplest of terms, since you seem to have trouble understanding what is happening in human society outside the boundaries of your computer/smartphone screen. You see, this — this Usain Bolt/Ellen Degeneres Photoshop tweet — was a joke. (Write that down. "Joke." It's an important concept.) The joke doesn't have anything to do with race. Zero. It's a joke about how some people are fast and how most people have to run errands. Usain Bolt happens to be so fast that he can run at the speed of a vehicle. (But he isn't actually a vehicle. That's part of the joke.) Usain is just a really fast person. And Ellen is just a really funny person. And the tweet is just a silly little congratulatory joke that a funny person told about a fast person. The joke wouldn't change regardless of the races of the two people involved. It wouldn't matter if Usain was black or white or purple with polka dots. The same goes for Ellen. If a guy who was white won the 100-meter event in three straight Olympics, then Ellen would have posted a picture of her riding on him. Same goes if the guy was Asian. Or Hispanic. And if Ellen was black, or Hispanic, or Asian — she still would've have posted the picture. It wouldn't have changed anything in regard to the joke, because, again, the joke has nothing to do with anyone's race. In fact, what Ellen was actually doing is honoring Bolt for his amazing accomplishments. She was acknowledging his achievements as the now three-time World's Fastest Man in a comedic way... because she is a comedian. Ellen was using her gift to recognize and draw positive attention to Usain's gift. It's a compliment. From one human to another human. Simple. And that is why Usain Bolt retweeted the photo. Because he recognized Ellen was obviously honoring him and appreciated the gesture. He knows she is a comedian and this a a joke-y way to say "nice job, Usain!" Unlike you, offended internetter, Usain Bolt got the joke. Further, when you choose to make something like this into racism (which it isn't), you merely detract from all the many real bona fide instances of racism that exist in the U.S. (here's one) and throughout the world. By crying foul when there is no actual foul, you encourage the population writ large to be skeptical when there are legitimate accusations of racism. It can even turn people cynical and make them dispute racism exists at all. Because every time they hear about an instance of racism, they think back to times like this when all the internetters got offended over a not-racist-at-all joke. So, in conclusion, you are wrong. Stop it, please. Stop going online just to find things by which you can be offended. Warmest Regards from Minnesota, Brent   PS - I've enclosed a "Photoshopped" image of my own creation I posted to my otherwise dormant Twitter. (I actually used the highly sophisticated, and free, Microsoft Paint.) The image depicts a comparatively tiny Ellen Degeneres leisurely riding atop the muscular shoulder of a huge butterfly-ing Michael Phelps. I'm confident, if you get creative and work up some new ways to be offended, you can find something discriminatory about this picture. Sure, the two people are the same race... but they are different genders! Perhaps it is a subconscious anti-feminist statement? Ellen's scaled down size indicates I think women are less than men, perhaps? Or maybe it's a reactionary commentary against the LGBT community in America... No. It's none of that. It's just the first two pictures I found on Google that would line up without much editing on Microsoft Paint. It's just a silly joke celebrating a couple cool people. Just like Ellen's tweet about Bolt. 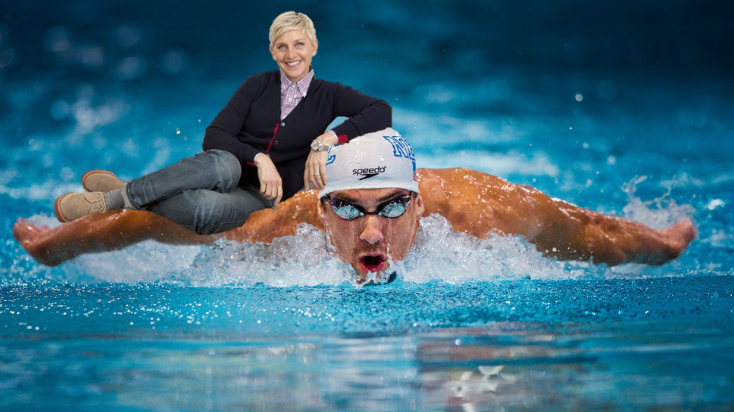 Congrats to Michael Phelps, Usain Bolt and all the Olympians who competed in Rio. And ongoing congrats to Ellen Degeneres for being so nice and positive all the time, even when the offended internetters attack.     Photos courtesy of: drcliffordchoi -- Brent Lee - Ellen Degeneres