Early Exits for Many at Wimbledon 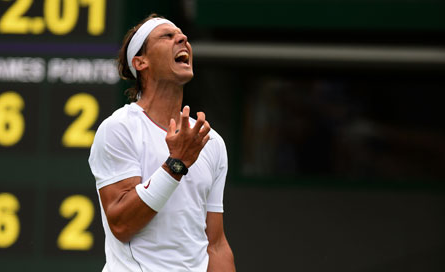 Rafael Nadal upset during his 2013 Wimbledon match.[/caption] Wimbledon. For those who prefer to support frontrunners and shoe-ins for victory, Wimbledon has been a disaster of epic proportions. Federer? Gone. Nadal? Gone. Sharapova? Gone. Williams? Gone. There is still hope on the Mens’ side with Novak Djokovic and Andy Murray continuing to battle through the brackets. Neither player has truly been tested yet in this Wimbledon, winning all of their matches so far in straight sets. Although it’s still too early to bet on a championship showdown between these two on Centre Court, hope might be the only thing left to cling to during this unpredictable tournament. Murray has all of the United Kingdom rooting for him, but this has yet to score him a win in this contest. Djokovic, on the other hand, already has a Wimbledon championship under his belt, along with four Australian Opens and a US Open. Based on what this event has shown us so far this year, rankings and statistics mean nothing, and the trophy is still up for grabs. [caption id="attachment_293" align="aligncenter" width="458"] 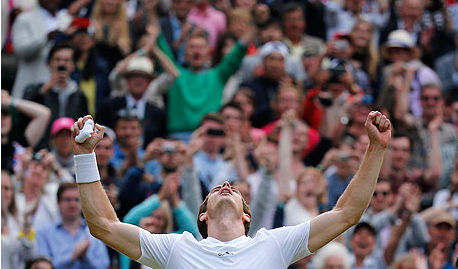 Andy Murray moves on to the semi-finals.[/caption] As for the Women, let’s be honest: With Williams out of the running, the field is wide open for that number one spot. When Serena is on her game, no one can touch her. She has a lightning-fast serve, powerful groundstrokes, and an intense glare to boot. She is invincible when she plays her best. Now that she is home licking her wounds, everyone else has a fair shot. Arguably one of the biggest fan favorites in women’s tennis, Li Na has demonstrated her competitive edge during this Wimbledon and seems poised to take her second Grand Slam title win. At this point, she certainly has as good a chance as anyone else. Wimbledon matches will continue on during this week. Check out Wimbledon’s website for more info: http://www.wimbledon.com/index.html
Tags: 2013, Andy Murray, Novak Djokovic, Serena Williams, Sports, Wimbledon