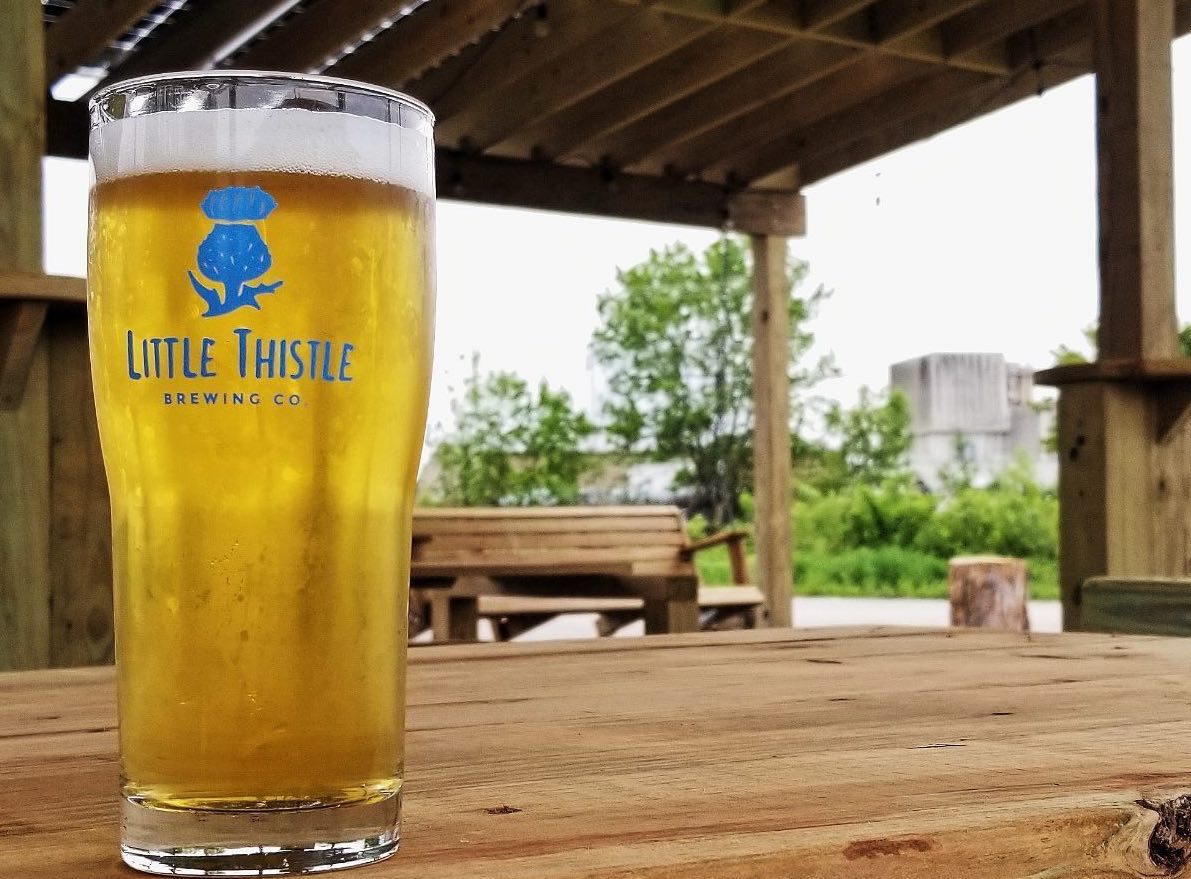 I got the idea while sipping beers with colleagues from KLM Royal Dutch Airlines in Amsterdam. Every ten minutes or so, another troupe of cyclists clad in skin-tight club uniforms would peddle by, many stopping at our pub for refreshments. Sure, many of the cyclists were cut more like Kevin James than Lance Armstrong, but their message was received loud and clear. Your Saturday afternoon exercise outing doesn’t have to suck.

And I won’t let the limitations of the scooter hold me back either. I’ll explore Minnesota’s craft beer wonderland by land and sea. I’ll trek by bicycle, kayak, on foot and scooter to experience some of the State’s great beers and soak in some spectacular scenery along the way.

COVID-19 advisory: Most of the breweries allow walk-up reservations but check their web-sites when constructing your itinerary.

Main street Victoria is a great starting point for any cycling or craft beer expedition. On the one side of the town square, Victoria House delivers scenic views of Steiger Lake and tasty dishes like their famous Pepperoni Soup or the Black and Bleu Burger. Just 2 blocks down the lake shore, Enki Brewing is my first craft beer stop. My cycling tour today will cover 19 miles from Enki along the yellow brick road; make that white limestone path of the Minnetonka LRT Regional Trail, to the malt riches of Excelsior and Steel Toe brew houses.

According to the esteemed craft beer reviewers of the Untappd app, Enki receives high praise for their variety of mocha porters. The regular Mocha Porter is brimming with creamy chocolate flavor and the hint of roasted coffee -- jump starts my trek. 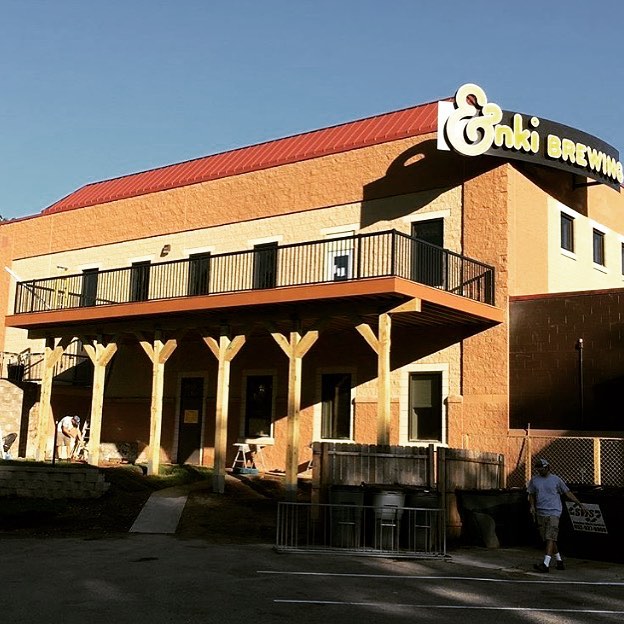 From Enki, it is only a half block to the Minnetonka LRT Regional Trail, a well-maintained limestone speedway to Minneapolis. Along the way, I am “forced” to pull over to take photos of several beautiful Lake Minnetonka vistas.

Excelsior Brewing anchors the chic Excelsior main street, a vibrant social scene. After the 14 mile ride, I’ll do a flight to keep things light. Their Bridge Jumper hits the spot with hints of fruit, raisin and papaya. And I’ll back that up with their highly-regarded All Day Peach Sour and throw in Untappd favorite Expresso Milk Stout for tasting purposes only. Ha!

I maneuver back to the Minnetonka Regional Trail and veer left toward St. Louis Park. It only makes sense that my trip will culminate at Steel Toe Brewery. Their best-selling Size 7 IPA is one of my favorites. As I maneuver down 35th Street, my mouth is already watering in anticipation of that smooth, piney and fruity bouquet. Size 7 is a great session beer but if you want to see why Steel Toe is a killer brew house, combine it on a flight with their outstanding, high alcohol-by-volume Sticker Fight (double Imperial IPA) or Size 11 IPA.

Two If By Sea

I am ready to raise my spirit of adventure to the next level. If I can get a good lactic burn peddling the western bicycling trails, why not take the show out to sea? Well, the mighty Mississippi to be exact. I am intrigued by the growing Mississippi Paddle Share route map (paddleshare.org) and the chance to let them do the work. We’ll rent their kayaks and equipment and drop them at their return kiosks at Boom Island. This scenic stretch from Mississippi Regional Park-to-Boom Island often yields eagle, heron and even otter sightings. The comfortable 3.9 mile paddle drops us right in the middle of some delicious and hoppy outposts in north Minneapolis. 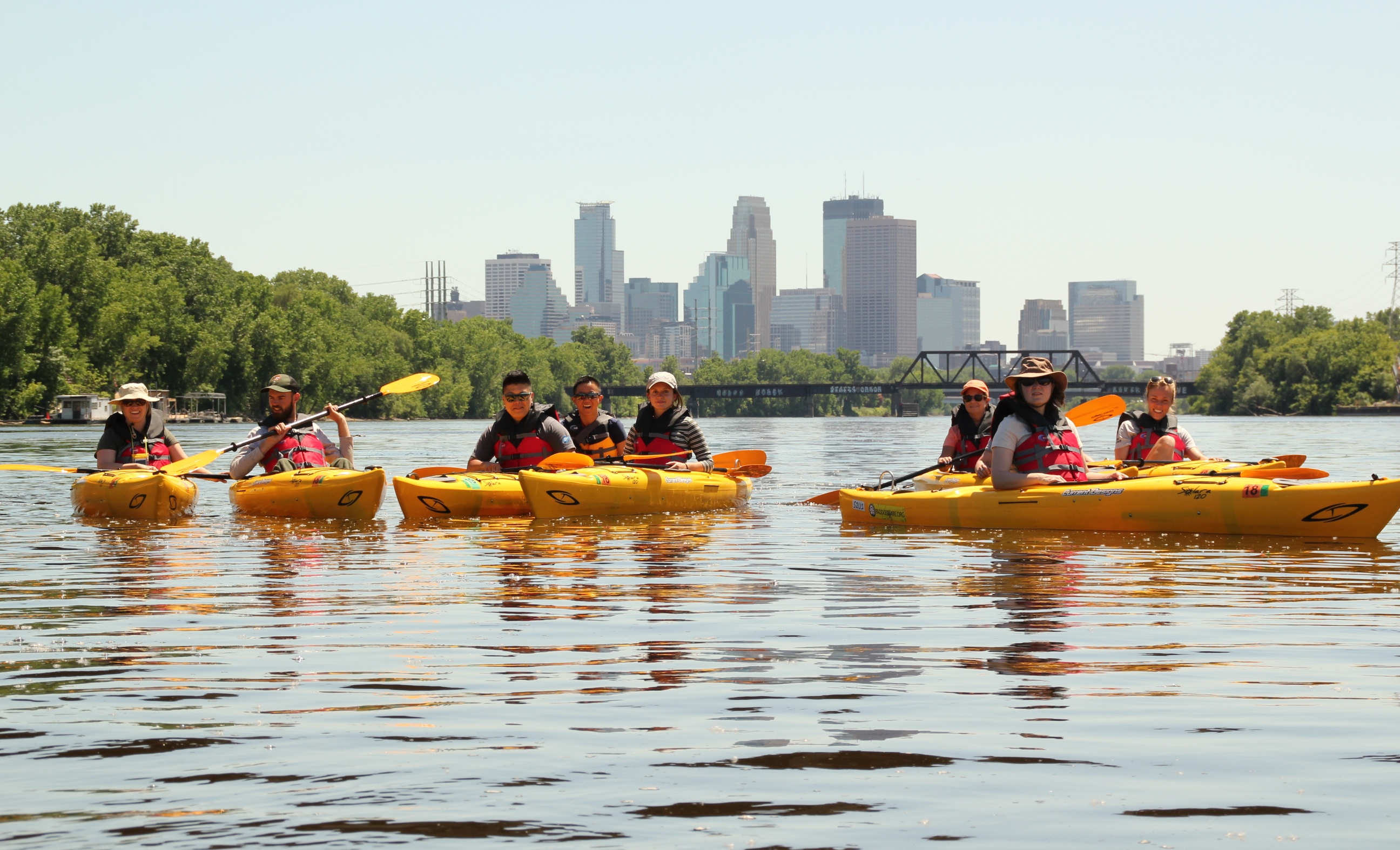 In the spirit of safe boating, we will save the cool brewery stops for our return on bicycles. That doesn’t mean we won’t go ashore and sample some tasty cuisine along the way. You need to keep a watchful eye on the left shoreline for the tiny sign for Psycho Suzi’s. It’s an easy spot to beach and I mean, who can resist their Polynesian motif and great river views from the patio?

Once we reach the Boom Island return station, it’s a breeze to stow our kayaks in the kiosk lockers and trade them for Nice Ride bikes to get back to our vehicle. Now we have choices. We can stay on the east side of the river and explore Broken Clock (Red Coats IPA, Rise 2018 Stout) or 56 Brewing (Super Ssippi Squeeze Imperial, Salted Caramel Expresso) on the way back. Or cross the bridge and test out the tasty brews at Prye’s (New England IPA, Grapefruit Miraculum) on the opposite bank. I make it a habit to check Prye’s website for live music because their backyard along the creek has been completely revamped — a cool and relaxing spot to enjoy a concert. I’ll meet you halfway and offer my top choices (above) and then defer to the great philosopher Yogi Berra: “When you come to a fork in the road, take it.”

Duluth doesn’t have to take a back seat to anyone when it comes to craft beer artistry. Start your cycling at the Fitger's complex or Canal Park (bike rentals available) and you can cruise on the Lakewalk and Superior Hiking trails and choose between four interesting breweries along the way. My route today will begin at Fitger’s Brewhouse, roll along the harbor to powerhouse Bent Paddle and conclude at the up and coming Ursa Minor Brewery. (Canal Park Brewing is nearby too.) 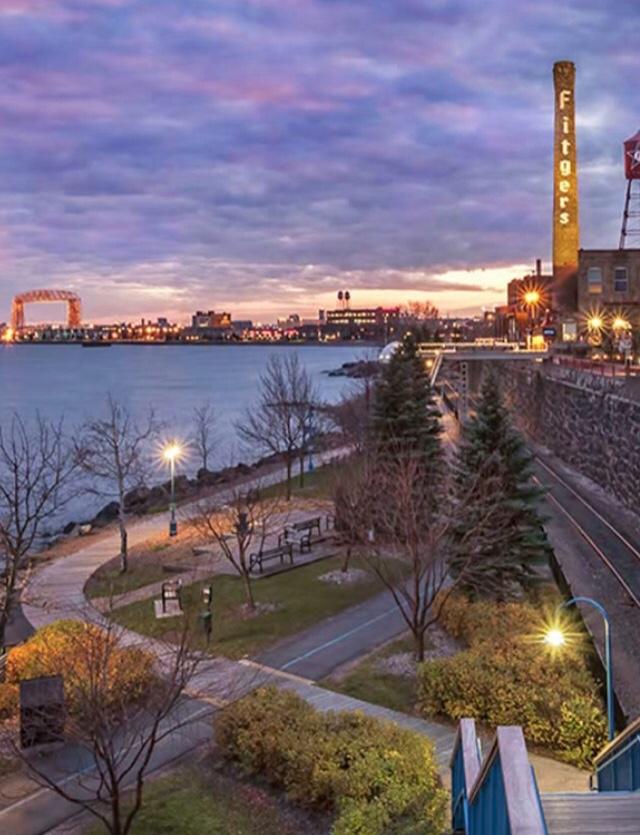 I was drawn to the Fitger’s complex with its dramatic views of the harbor, Lift Bridge and downtown (see photo). Fitger's Brewhouse is known as much for its music as its fine array of craft beers. Trampled By Turtles blossomed on the Brew House stage and the owners helped build the popular Homegrown Music Festival. Well, that music better be pretty damn good, because they have many beers with knockout ratings by Untappd. This one is definitely going to be a flight stop because the choices are difficult. I end up picking the raspberry-barreled American wild ale-Framboise, the Orion porter, the American IPA- the Haze 3.0 and the award-winning Procrastination Dopplebock.

The new Bent Paddle taproom is drawing rave reviews. I love the sleek modern design and soaring wooden beam ceilings. It is easy to see why Bent Paddle is a perennial favorite in the Star Tribune reader bracket challenge. Because the brewer has secured so many tap lines across the State, I am a regular patron of their smooth, citrusy Bent Hop American Ale and the hearty Black Ale. On the other hand the taproom is a popular proving ground for new rotators. Look for their prized ‘Black’ spinoffs such as S’mores Black, Bourbon Double Black or Double Shot Double Black.

It’s a short four minute ride south to Ursa Minor Brewing. Open barely a year; the colorful blue brick building is cozy and inviting. You’ll get live music on the weekends and their wood-fired pizzas hit the spot. It apparently didn’t take Ursa long to learn the ropes. Their Bear-ista sweet milk stout and Ditch Monster IPA are already garnering ratings on par with the best. 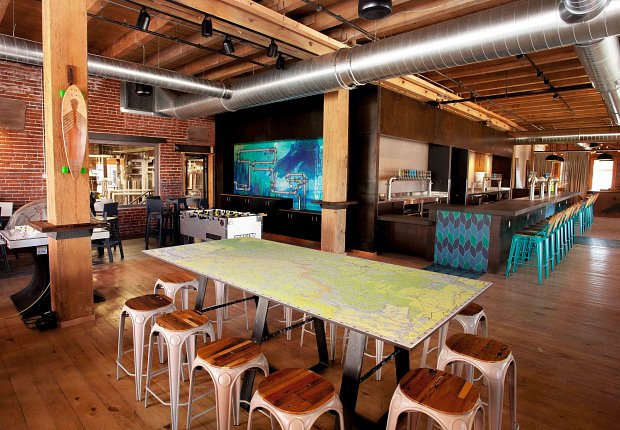 In contrast to the Twin Cities, craft brewing started rather slowly in Rochester. Five craft brew houses launched in the years after the passage of the Surly Law and their straight line geography across the city make for a leisurely 40 minute craft beer tour. I’ll launch at LTS Brewing on 32nd Avenue Northwest. It’s only about 5 blocks ride to get on the Douglas Trail which is a convenient conduit east to Little Thistle, Forager and Kinney Creek brew houses.

LTS’ solidly-rated IPAs, Inspiration and Introspection present ironic and appropriate questions for today’s ride. Instead of motivation, I’ll opt for the strong citrus waves in Introspection. I knock down most of it and head for the open road and a pit stop at Little Thistle Brewing, only 2 miles away. I’ll take advantage of their cool patio, hydrate and recheck my notes. As with LTS, Little Thistle has two excellent IPAs (The Wetlands and Strata Galactica) but I’ll flip to the wild side and take on the P.B. M.D. The “P.B.” stands for peanut butter and hello, we are blocks away from the venerable Mayo Clinic. A pleasant surprise as this concoction has a velvety chocolate flavor layered in like a delicious birthday cake.

I have saved lunch for Forager Brewing which is about 15 minutes away. The brewer pays the daily double because it draws outstanding reviews for its pizza and nachos — and delivers some of the highest rated beers in Rochester. Even with hundreds of reviews at Untappd, their Nillerzzzzz Imperial stout series is a head turner and I can’t wait to try their Breakfast Nook Imperial Porter either. After refueling, I’ll hit the outer limits of my ride (Kinney Creek Brewery: Vixen Barrel Aged, Blacka-Doo and Seltzers) and take in the sights and sounds of downtown Rochester.

Back on the Scooter

Back in Nordeast Minneapolis, I’m in luck. No one grabbed my scooter. In some ways I know how Lewis and Clark felt because my trail ahead is daunting and may be impossible. There are a whopping 10 breweries (and Sociable Cider Works) within a two mile radius! If I was in the north woods, I would be tying yellow ribbons behind me. No worries. I see Bauhaus in the distance and wiser heads will prevail. I’ll drop my scooter there and catch a proper Lyft driver to get me home — but not before I make several more delicious brewery stops in the neighborhood.
Tags: Lifestyle, Beer, Food, Indeed Brewing, Little Thistle Brewing, Minnesota Brewery Tour, Steel Toe Brewing, Travel