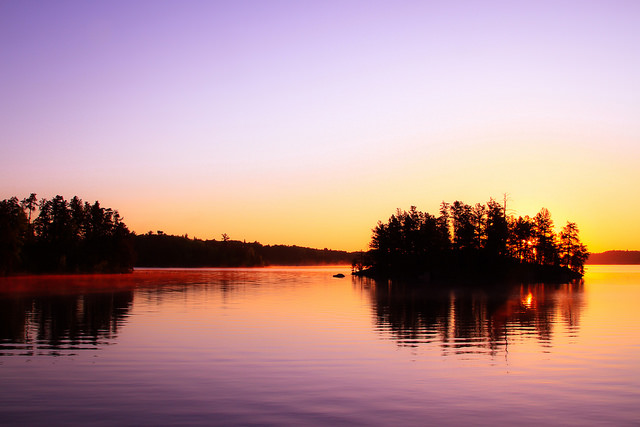 Few parts of Minnesota have escaped the heavy rainfall of the past few months; while this is good news for water levels on Lake Superior, other areas haven't been so lucky (many walking paths in Minneapolis, for example, are still puddled over). The extreme northern reaches of our state, along the border with Canada, have seen some of the most significant rises in water level this spring; summer expeditions to the boundary waters will be having set backs. Voyageurs National Park is accustomed to hosting a very busy month of July. Its many lakes and forests are full of campers and canoers pretty much all summer long. But Monday the Park Service released a rather unfavorable announcement: until further notice, most of the backcountry lakes are to be closed along with numerous other reservable campsites. With Rainy Lake (and others) still several feet above flood stage (highest level since 1950), park officials have to do a sizable amount repairs and assessing. As explained on their website, the park will be automatically refunding reservations disrupted by these closures; the park also hopes to reopen most campgrounds and trails by July 21 (visitors can start booking as of then as well). For the other parts of the boundary waters (and for most lakes in Minnesota at this point), use extreme caution when using docks and other mooring areas. Flooded lakes can cause various hazards because the structures are mainly designed to function at normal water levels.   Photo by: A. Strakey
Tags: Outdoors, Boundary Waters, Canadian Border, Ely, International Falls, Koochiching County, National Park, St. Louis County