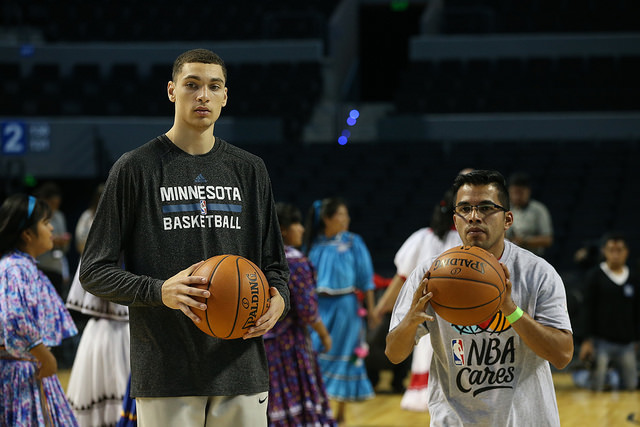 The Timberwolves have the worst record (8-40) in the NBA, have played only twice on ESPN and have suffered injuries to nearly every important cog in the rotation -- but All-Star weekend will finally give some of the pups a chance to show their stuff to the rest of the league and its fans. Four of the team's most important long-term pieces have earned a spot in the BBVA Compass Rising Stars Challenge on February 13 at Brooklyn's Barclays Center. The challenge features a game including players from the last two draft classes that have played well and have a bright future. The Wolves' Zach LaVine, Shabazz Muhammad, Gorgui Dieng and Andrew Wiggins were invited to the event. The past three games were played with teams drafted by former players like Shaquille O'Neal and Charles Barkley. Prior to that, the game had been sophomores versus rookies. This year the league has switched up the format for the game; it will feature Team U.S.A and Team World. LaVine and Muhammad are on the U.S. side of things while Dieng (Senegal) and Wiggins (Canada) will play for the world team. Other major players in the game are the "Greek Freak" Giannis Antetokounmpo (Bucks), 2013-14 Rookie of the Year Michael Carter-Williams (76ers) and the player that was part of the trade that brought Muhammad and Dieng to the Wolves, Trey Burke (Utah). Wiggins has been on a tear lately as he has been forced into a featured role when Corey Brewer was traded and while Ricky Rubio, Kevin Martin and Nikola Pekovic were out for extended stretches. He has been named Western Conference Rookie of the Month each time the award has been given this season. He has scored nearly 20 points per game in his last 19 starts and hasn't dipped into single-digit scoring numbers. LaVine will be pulling double-duty as he is slated to compete in the Sprite Slam Dunk Contest. Since he was drafted with the 13th pick in the 2014 NBA Draft, he was almost destined to participate in the dunk contest. His 6-foot-5 build and uncanny jumping ability (46-inch vertical) should give him a good shot against the other three contestants: Antetokounmpo, Mason Plumlee (Nets) and Victor Oladipo (Magic). Each player will get two dunks in the first in each of two rounds. The two players with the highest combined scores in the first advance to the final round where the two finalists will compete for the title of slam dunk champion. The All-Star weekend and some of the play that has been coming from the youth on the team are the rare bright spots in an otherwise dismal and unfortunate season for the Timberwolves, who hope to at least play better basketball after the All-Star break (or not in hopes of competing for the offseason's number one pick).   Photo via: Olimpiadas Especiales México
Tags: Basketball, Minnesota Timberwolves