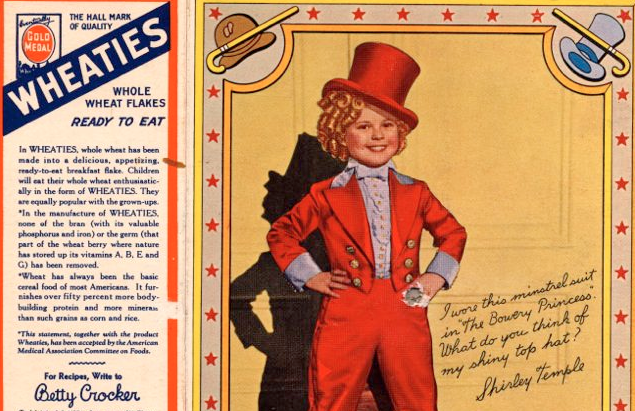 General Mills will not be forgetting their “spokes kid,” Shirley Temple, from the 1930’s promotions they had with the child star. The Minnesota-based company is honoring her with a tribute to her passing on February 10, in her Woodside California home. Temple was 85. General Mills is looking back at her time as their “spokes kid” -- Temple appeared twelve times on their Wheaties boxes, making her the second most featured star ever -- Michael Jordan is the only person to appear more. In 1936, Wheaties offered a series of ten collectible images of Shirley Temple from her movies on the back of the cereal boxes. Temple’s darling image and star popularity in the 1930’s helped General Mills with promotions with Bisquick. In 1935, she used her stardom to influence kids to drink their milk. When consumers purchased a large box of Bisquick, the local grocer would give out a child-sized mug with her picture on it. 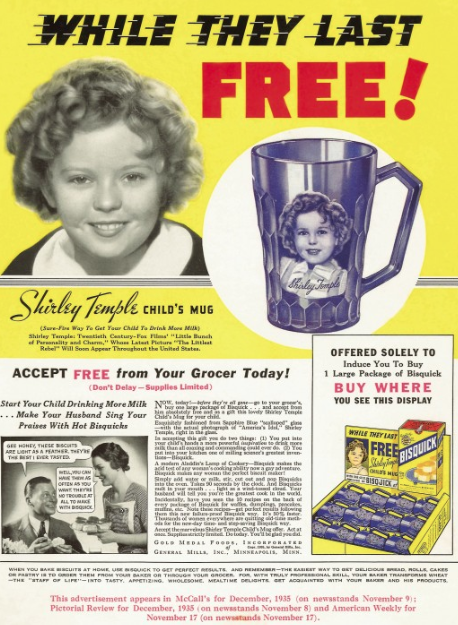 In the 1930’s with the Great Depression in full force, Temple used her platform as a mega child star to bring Americans joy and laughter while watching her movies. She was the American people’s little darling, with all her curls and dimples, her movies and advertisements, that we all enjoyed in our own childhood. General Mills is saddened by the loss of their most famous “spokes kid.”   Images via: General Mills
Tags: General Mills, News, Shirley Temple