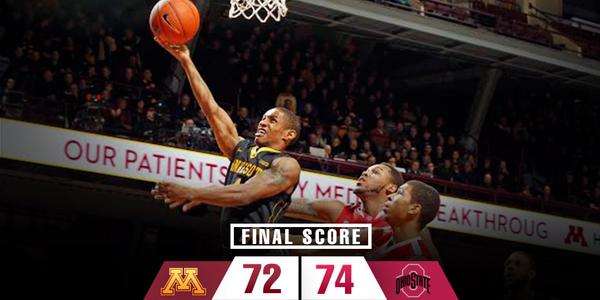 The Minnesota Gophers men's basketball team played its first home game of the Big Ten Conference schedule Tuesday in its new blackout uniforms, but came up short in an overtime thriller. Minnesota hosted the 22nd-ranked Ohio State Buckeyes at Williams Arena and took the opponent to the limit before succumbing in the extra period. In overtime, the Gophers couldn't put it away and Buckeyes Marc Loving hit a jumper with 5.6 seconds left to take the lead. As the fans left the building, a hushed murmur of voices was all to be heard. The Buckeyes star freshman guard D'Angelo Russell put on a first-half show in the blacked-out arena, scoring 25 points in the half to lead Ohio State to a 41-29 halftime lead over the Gophers. He finished with 27 points. In the second half, Gopher guard Nate Mason stuck on Russell like glue, denying the entry pass and keeping him from connecting on all seven of his second half shot attempts. The 6-foot-5 Russell is averaging 18.3 points per game on the year and over 20 points per game in three conference match ups. In contrast, the Gophers star senior guard Andre Hollins was 3 of 13 from the floor and didn't register a point in the first half. Coming into the game, Hollins was six points from eclipsing 1,500 points for his career, becoming the first to hit that mark along with 300 assists. He finished with 12 points, five above his average during conference play and on line with his season average. With Hollins struggling, the Gophers leaned on two other seniors, center Mo Walker and point guard DeAndre Mathieu. Walker finished with 18 points, nine rebounds and two blocks, while Mathieu scored 17 on 7 of 12 shooting with three steals and three assists. Mathieu continuously drove to the basket, slicing his way through defenders, but was blocked on a few attempts due to his slight frame (5-foot-9, 165 pounds). The Gophers tried to feed Walker in the post as he continues his consistent rise to the top of  the Big Ten's centers. The Gophers rushed back from the halftime deficit and sprang to life about halfway through the second half. They trimmed the Buckeyes' ten-point lead down to finally tie it at 60. The teams were tied at 66 with under ten seconds when Russell drove to the hoop, missed and a follow-up by Buckeyes center Amir Williams rimmed out. After the Loving shot in overtime, the Gophers didn't call a timeout and ended on a fruitless possession led by Mathieu. Minnesota's record falls to 11-5 and 0-3 in the Big Ten after the loss. They next play the Michigan Wolverines on Saturday.   Photo via: @GopherMBB
Tags: Minnesota Gophers