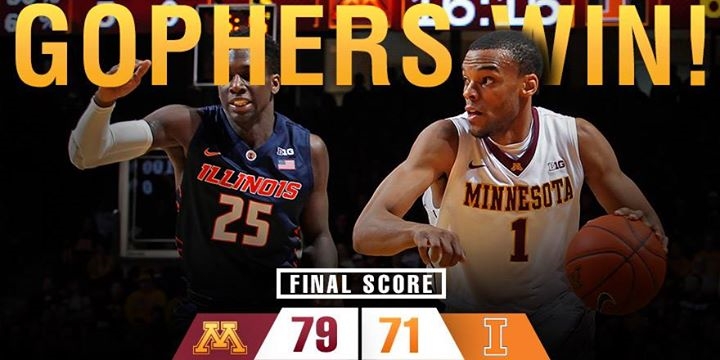 After earning their first Big Ten conference win last Saturday against Rutgers at Williams Arena, the Minnesota Golden Gophers Men's basketball team got their second win of the conference schedule Saturday. The Illinois Fighting Illini came into the game 13-7 (3-4 in the Big Ten) and without several of its best players, including a new walk-on former manager. The Gophers (13-8 (2-6)) were able to treat the home fans to a 79-71 victory. Gopher guard Carlos Morris started off hot, with 13 of the team's first 17 points. Morris finished with 16 points on 4 of 4 shooting. The score at halftime was 33-30. The Gophers pushed their lead as high as 15 in the second half as senior center Mo Walker upped his career high in rebounds with a 12-point, 13-rebound game. The defensive pressure put on by Minnesota coach Richard Pitino's full court press didn't result in too many turnovers for the Illini (10), but did lead to a shooting clip of only .377. Andre Hollins has also upped his play recently, averaging nearly 27 points over the last three games. He scored 28 points Saturday after a streak of four single-digit scoring games earlier in the season. Hollins' shooting from three so far in the season (.434) is a few percentage points higher than his total shooting percentage (.429). With 10 minutes left in the game, the Gophers stole the momentum with a Charles Buggs dunk on a bounce pass on the fast break. Hollins hit one three-pointer with about five minutes left that seemed to seal the Illini's fate. Illinois made a final push in the closing minutes to tighten the score, but it wasn't enough for an Illinois team that has been decimated by injuries. Guards Kendrick Nunn and Malcolm Hill led Illinois with 18 points apiece. Gophers freshman Gaston Diedhiou came in for one minute in his second appearance of the season since gaining academic eligibility. Halftime also had its own festivities as former Gophers center Randy Breuer's number 45 was retired in a ceremony at mid-court. The 7-foot-3 Breuer was on the Gophers during 1979-1983 and spent 11 seasons in the NBA after averaging 20.4 points per game as a senior.   The Gophers next play at Penn State January 28.   Photo courtesy of: Gopher Men's Basketball
Tags: Minnesota Gophers