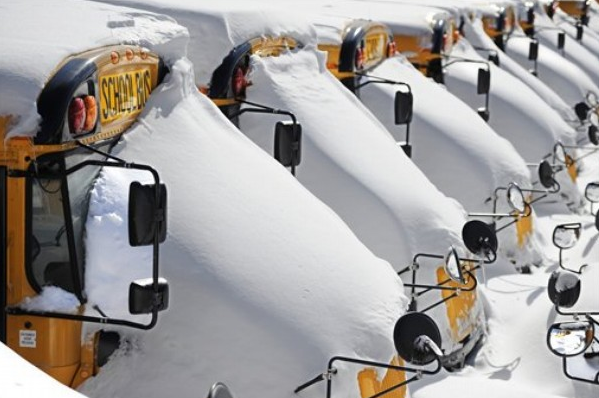 It's no secret that it's cold outside in Minnesota right now -- in fact, you'd be hard pressed to scroll a social media feed or listen in on a conversation where the topic is not brought up. Well now, it is in fact so cold, and will stay so cold, that Governor Mark Dayton is canceling school statewide on Monday. Do you hear that? That's the sound of the collective voices of Minnesota children rejoicing as their Winter Break was just extended another day. This move is not unprecedented, former Governor Arnie Carlson canceled school three times in his tenure, once for temperatures that reached (-80°) with the windchill in some areas. With the temperatures expected to be negative in the double digits on Monday (possibly the coldest temps in a decade), especially in the morning when kids wait for buses, etc., Dayton decided to cancel school statewide today in an attempt to help parents prepare for children spending the day home and not at school.

“The safety of Minnesota’s schoolchildren must be our first priority,” Dayton said in a release Friday. “I have made this decision to protect all our children from the dangerously cold temperatures now forecasted for next Monday. I encourage Minnesotans of all ages to exercise caution in these extreme weather conditions.”

Many schools were planning on canceling their school day  on Monday anyway, so this move is supported by most educators and school officials. According to Education Commissioner Brenda Cassellius, the decision to open the schools for Tuesday will be left up to each school district, not the state. I know if I was still in school, I would be crossing my fingers for more frigid temperatures and another day without school -- but I know parents are holding their collective breath for a warm-up -- get those kids back to school! Photo via: Google