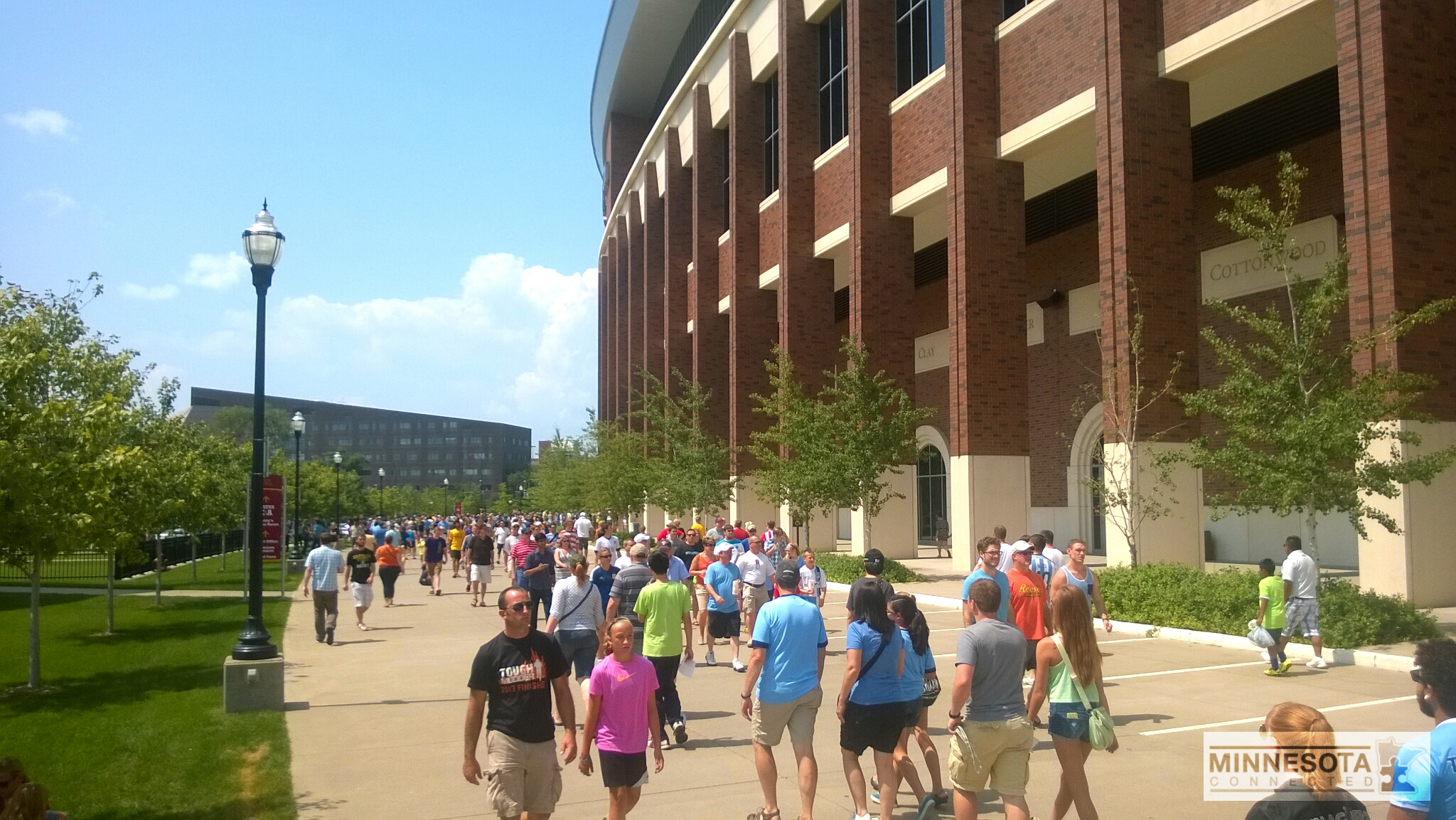 Last Saturday brought two world-renowned soccer teams to 34,047 fans at TCF Bank Stadium on the University of Minnesota campus. It also brought two fun soccer matches including home team Minnesota United who took on the Ottawa Fury. The day started off with a matchup of Greek team Olympiacos and English Premier League’s Manchester City as part of the Guinness International Champions Cup 2014. The Guinness Cup has had games all over the United States including Yankee Stadium and the University of Michigan’s famed Big House which hosted a fantastic attendance of 109,318 patrons, an American soccer record. Stevan Jovetic of Manchester City came into the match leading the tournament with nine goals and he made sure to add to that total on the recently installed grass, which replaced the stadium’s typical turf field. The grass was a bit of a topic on the day. Friday’s 6 p.m. training session for Olympiacos was moved to Lyle Robbie stadium in St. Paul to allow grounds crew to alleviate concerns that the field wasn’t well suited for soccer. 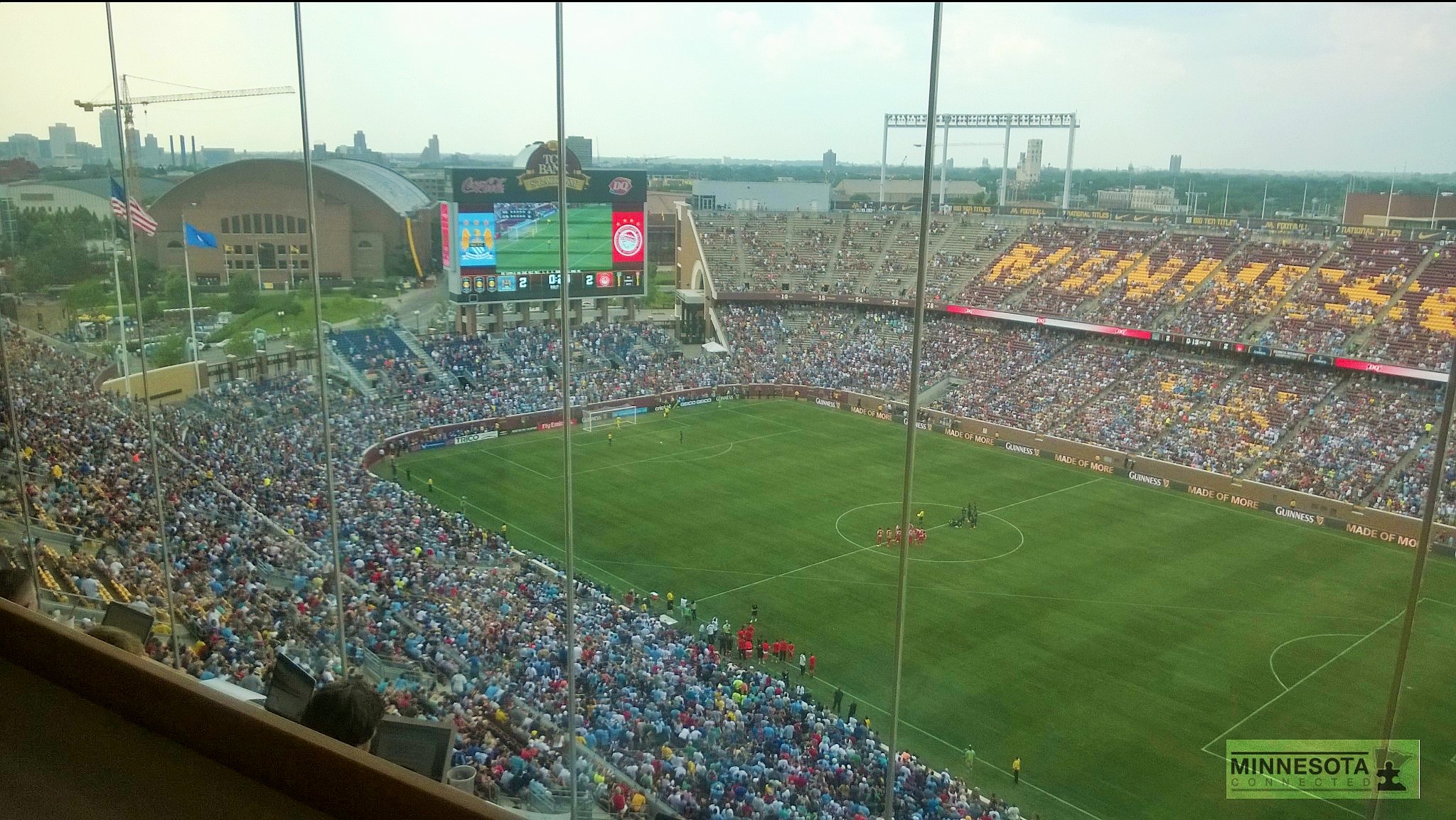 Olympiacos coach, Míchel said that the field was “terrible” but added that they were going to play no matter what.

“We’re here to compete, he said. We don’t care about the field. We’re here to play and that’s what we did. “We enjoyed it. We all have to pay respect to the people who pay.”

On match day there were sod lines and groundskeepers watering it down in hopes of improving conditions on the 85 degree day. That heat and lack of cloud cover caused the refs to call for a water break 30 minutes into the first half and again in the second.

A minute and thirty seconds into the match, Olympiacos scored, but the goal was called off due to an offside call. Soon after, Manchester City’s Samir Nasri was unable to take advantage of a 3-on-1 situation as he missed his shot. Manchester City was really attacking early on, pleasing the fans who were largely rooting for them based on their cheers and apparel. The crowd popped when the first goal came in the 35th minute after some impressive footwork from City’s Jovetic. 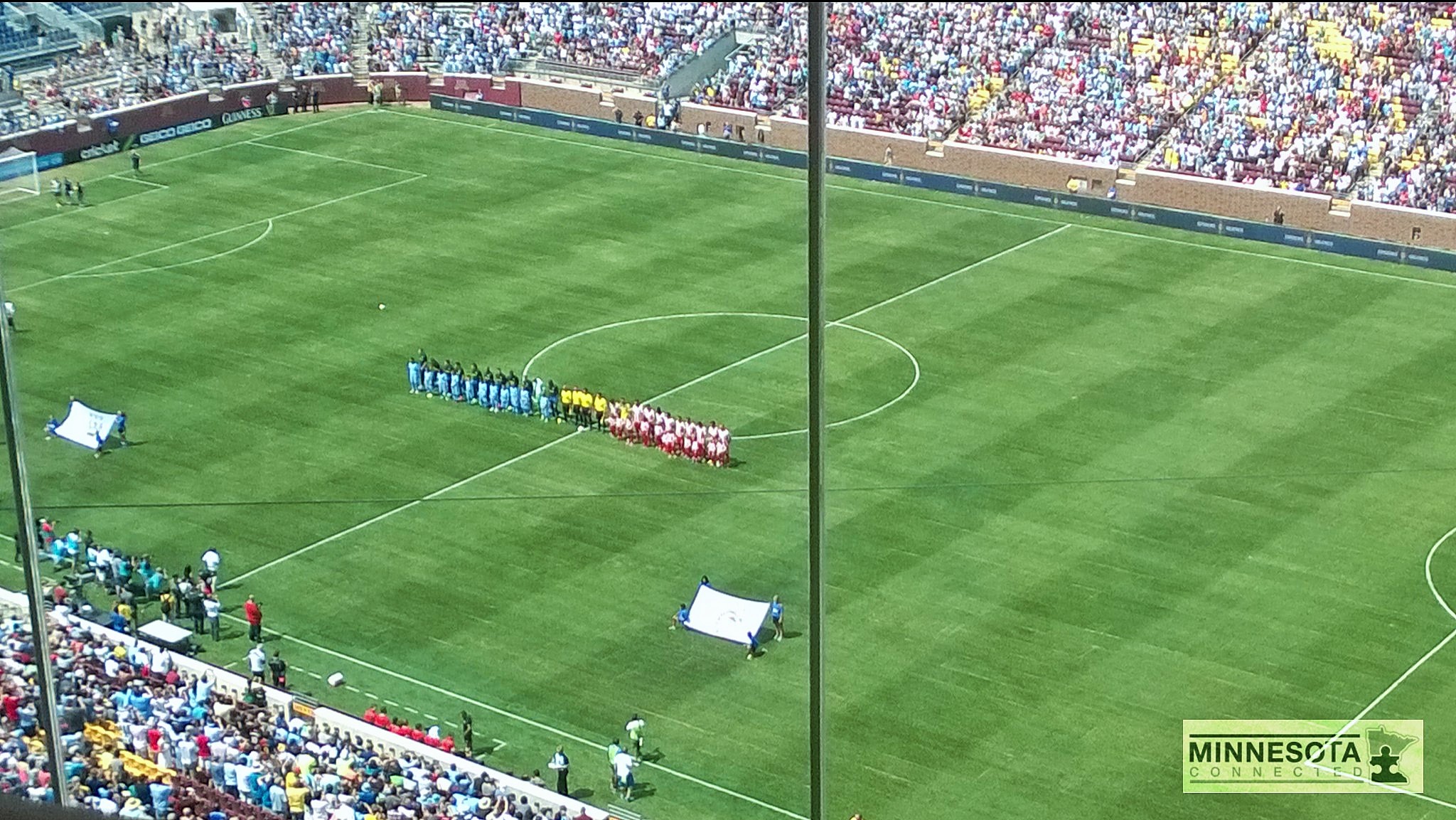 Not two minutes later, Manchester goalkeeper Joe Hart gave up a goal to Olympiacos striker Dimitris Diamantakos who was assisted by Ioannis Maniatis. In the beginning of the second half Manchester blew three chances in two minutes, but they finally got their second goal in the 53rd on a penalty kick by Aleksandar Kolarov. Olympiacos attempted to tie it up quickly with a cross, but it was snatched by Joe Hart. It didn’t take long though, in the 65th minute Hart was severely out of position as Dimitris Diamantakos earned another goal. At the 80th minute fans started the wave anew and brought it around the stadium a full four times. Directly before the successful wave, fans saw back-to-back saves by the two goalkeepers. Left-winger Scott Sinclair launched a desperation shot in the 90th minute that sailed high. [caption id="attachment_274725" align="aligncenter" width="522"] 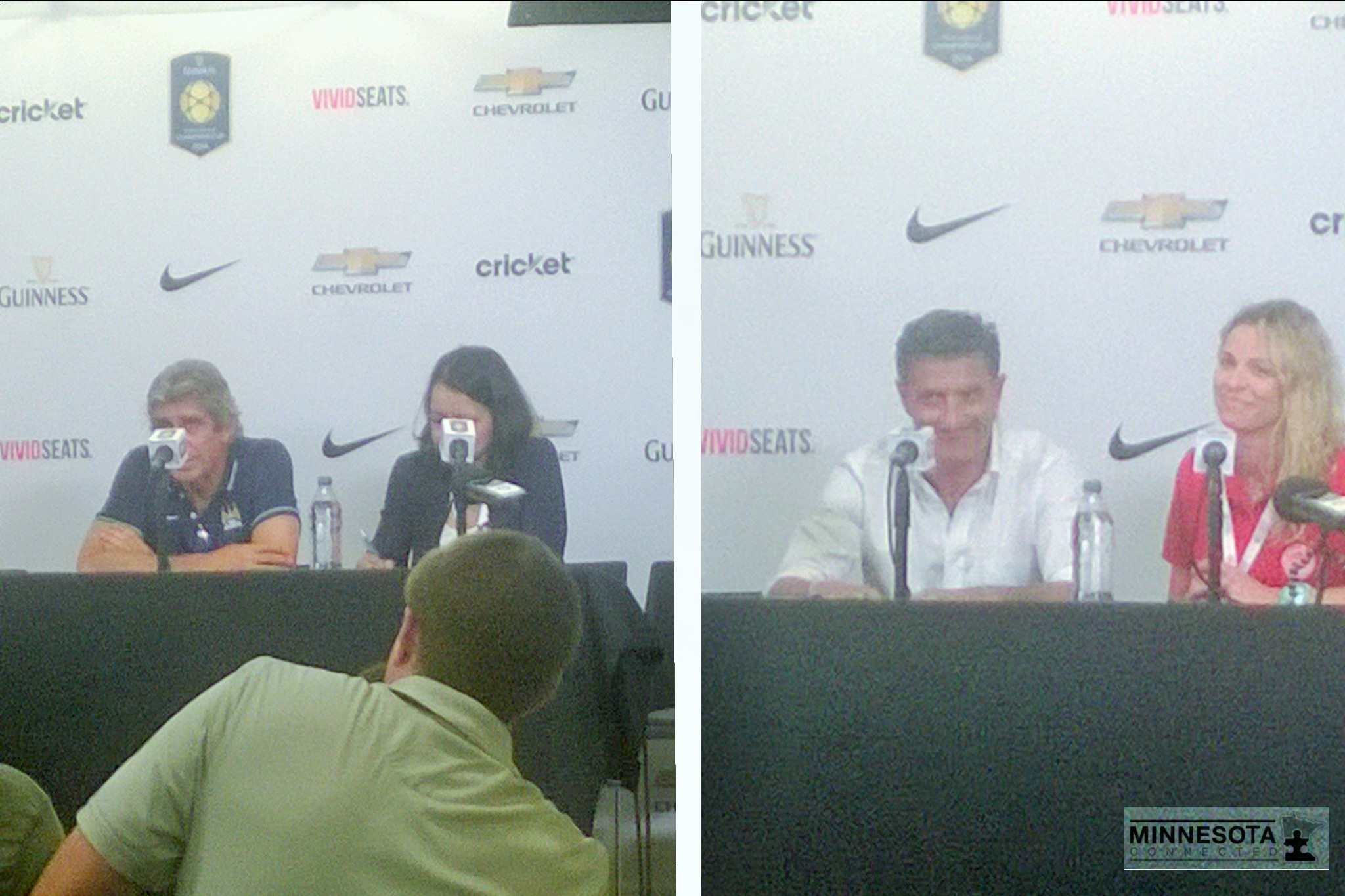 Manchester City and Olympiacos Mangers.[/caption] The game went straight to a penalty shootout after regulation time. The dogged players stretched in preparation. Through the first five shots by each team, it was tied 3-3 after Joe Hart blocked an Olympiacos shot with only his left toe. Both teams made their fourth shot, but Manchester missed its fifth which allowed Olympiacos to score and take the match 5-4 on penalties. When asked about the atmosphere in the stadium, both coaches liked the environment. Pelligrini said that it was good on most fronts. The fans saw a good game and it will likely get more people interested in soccer. Olympiacos’ Diamantakos was named “Man of the Match” for his two-goal performance.

The next game started much faster as the fourth minute brought a right-side cross from defender Kevin Venegas to forward Christian Ramirez.

“I think it started with his selfless movement,” United coach Manny Lagos said. 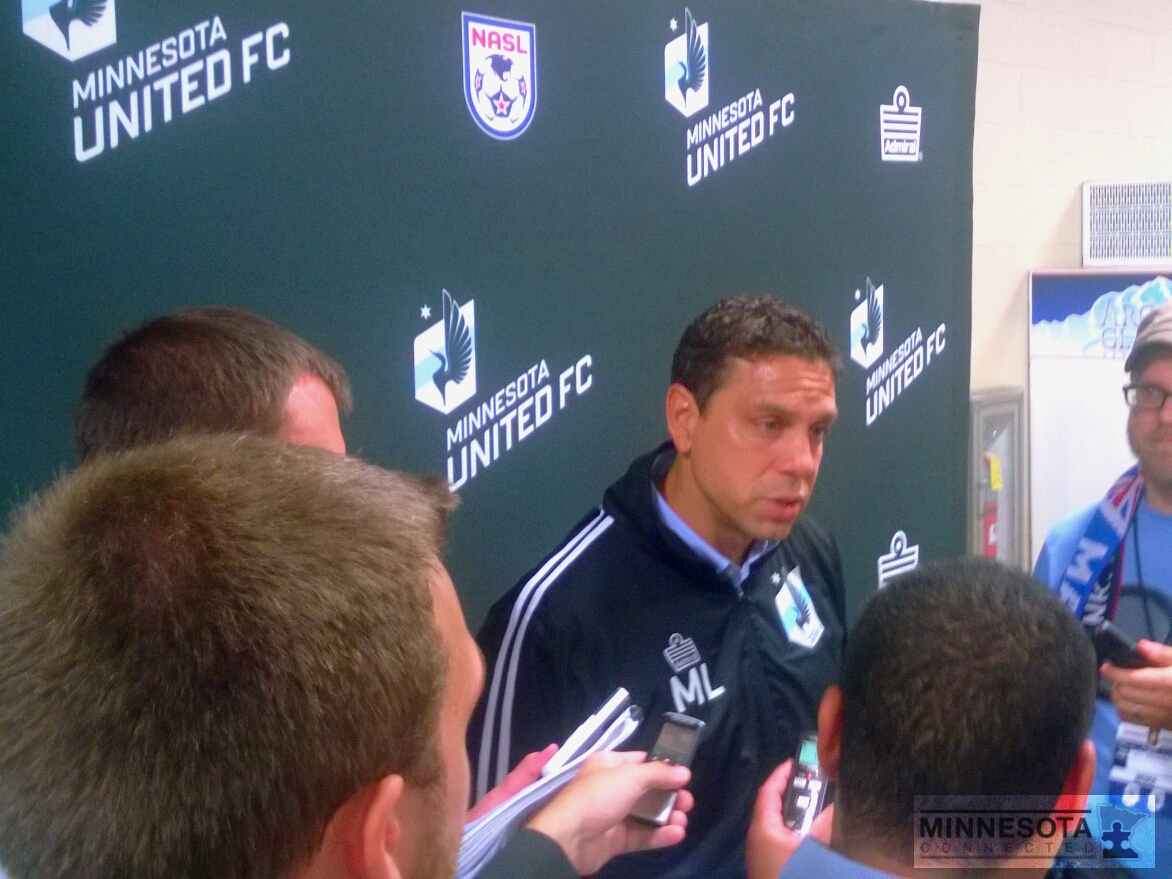 The game also featured a smaller but much rowdier crowd per capita due to, as Lagos said, the teams had more to play for than in the first game. The Dark Clouds, the United’s supporter group, and the rest of the #loonarmy wailed at every exciting moment. The group has 500 registered members according to Minnesota United. (If you would like to, you can register here). The group yelled: “Who hates Ottawa?” “We hate Ottawa!” To a University of Minnesota student such as myself found funny due to our typical chant of, “Who hates Iowa?” The rowdy crowd also brought a rowdy game with five yellow cards. I counted four to five downed players in a single 30-second period. Around the 42nd minute, United started working the ball around slowly, bringing Ottawa out on them defensively. Then they attacked but were turned away by Fury goalkeeper Romuald Desire Peiser. Lightning in the distance fueled some in the press box to talk about NASL postponement rules. Fears were replaced with some laughs at halftime as Minnesota played a “This is Minnesota United” commercial, a parody of SportsCenter commercials, on the big screen. As the match began the second half, only five minutes went by before Ottawa was able to tie the score on the foot of Sinisa Ubiparipovic who made it past Mitch Hildebrandt (hoo-hah Hildebrandt as the Dark Clouds say). [caption id="attachment_274727" align="aligncenter" width="522"] 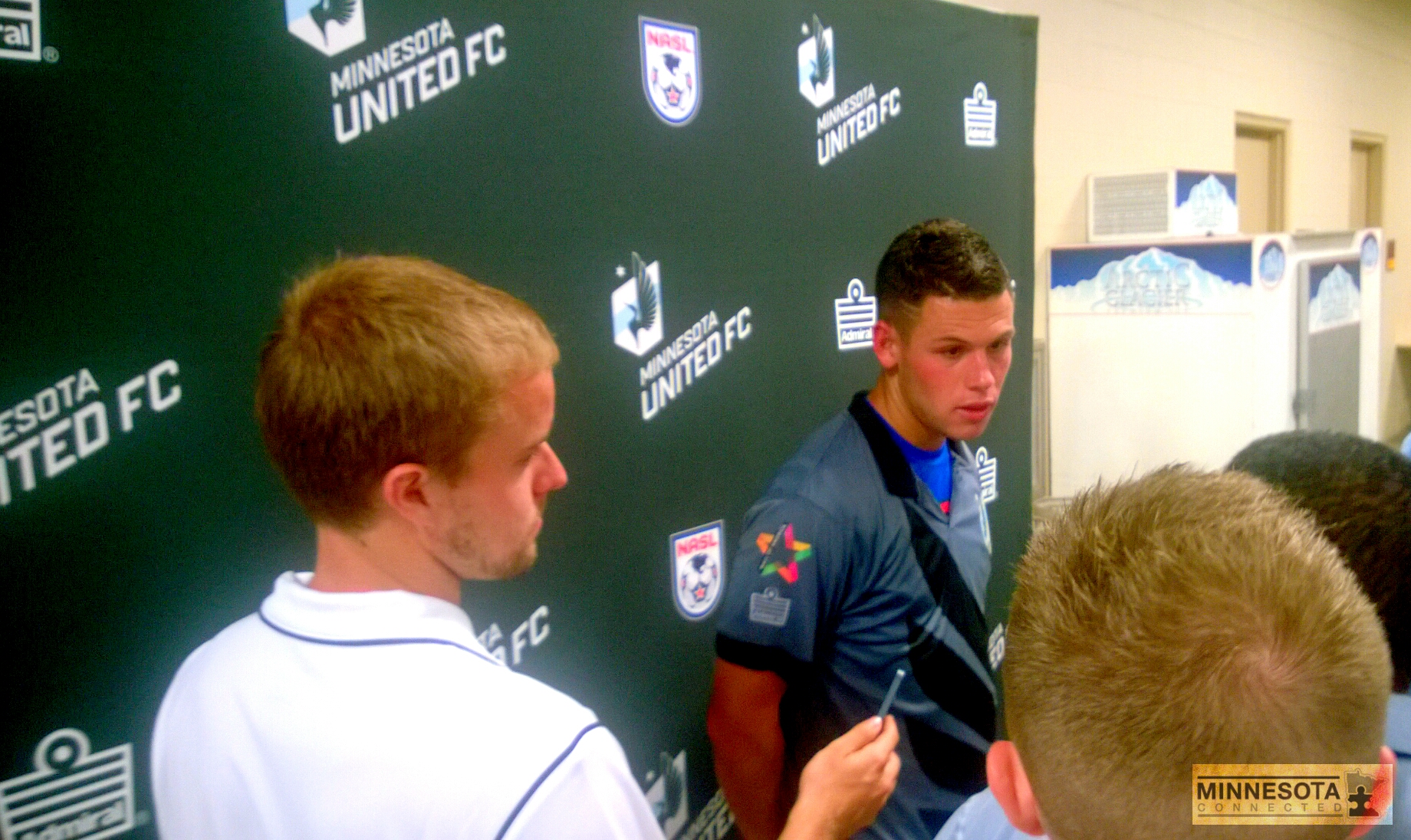 Christian Ramirez of Minnesota United[/caption] The eventual “Man of the Match” Ramirez tipped the game back in Minnesota’s favor with a penalty kick goal ten minutes later after some debate between the referees. Both Ramirez and his coach credit the recognition and his nine goals this season to his movement. The 70th minute brought the foreshadowed rain and the Dark Clouds weathered the storm, literally. As most fans retreated underneath the bleachers, the group withstood the wind and rain. Ramirez said the rain made the field faster and better at the end of the game.

“Field conditions weren’t great, but they were better than people thought,” Ramirez said.

The match remained 2-1 to the end, but Ottawa tried its hardest to work back into the game including a scary attack at the 81st minute that was knocked away and then saved by Hildebrandt. Manny Lagos explained the game and “amazing atmosphere” as an example of uniqueness and of the special market we have in Minnesota.

“The eyes of the whole world were on us which only bodes well for us,” he said.