Gophers Coach Jerry Kill Has Another Seizure During Game 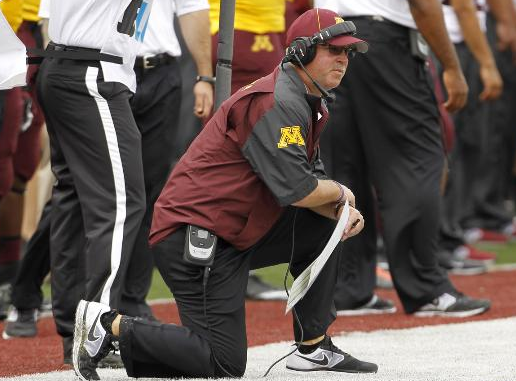 Minnesota Gophers head football coach Jerry Kill has epilepsy -- today he had a seizure right at half time as the team was headed into the locker room. Kill was immediately put on a stretcher and taken to a hospital. By late afternoon he was already back at home resting. Kill has battled with epilepsy and now has to battle the question: "Can he really still do this job?" This is Kill's third seizure during a game in three years. A football team not having a head coach on the sidelines every minute of a contest is at a huge disadvantage. Jerry Kill has a strong group of assistant coaches who are familiar with handling situations where the head coach cannot finish a game -- but it's difficult for a "legion of warriors" to go into "battle" without their leader. Undoubtedly the Gophers look a lot better under Kill than they did under Brewster -- but we still know very little about the 3-0, 2013 team who won 29-12 today against Western Illinois -- they have spent the first three weeks beating up on inferior competition. Once the Big Ten schedule begins this team will finally start to be tested. Then we can evaluate Kill's squad with a bit more certainty. Photo via: Star Tribune