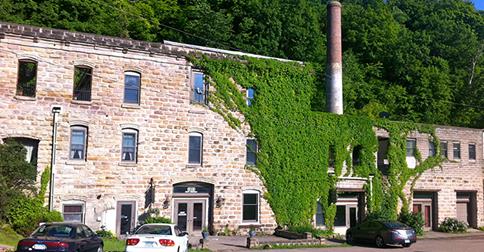 An aspiring and historic renovation of the old Jordan Brewery (Jordan, MN) has been hit hard by recent rains: a landslide brought tons of mud and debris into the third floor apartments of the building on June 19th. A small batch brewery and taproom, the Roets Jordan Brewery, was in the process of moving into the space. Serious doubts have risen on whether they'll get to stay. The Jordan Brewery has origins dating back to the 1850s. Caves connecting with the building allow for constant cool temperatures, which are needed to make lagers the old-fashioned way. Tim Roets, the man behind the beer and the restoration, had hoped to create a unique and low-tech niche for himself with the special location. The same hill which offered so much promise with its deep caves became a hope-dashing nemesis with this year's wet June. Though no major brewing equipment suffered damage due to the landslide, the integrity of the mud above is causing a lot of concern about future slides. If the hill were to be secured (which isn't certain), it could cost well over $1 million (and upstart brewers generally do not have that kind of cash laying around). The project may be forced to move. It won't be a very happy 4th of July for Roets, but he hopes to know the fate of his brewery sometime after that. It would be hard leaving the lager caves behind.   Photo via: Roets Jordan Brewery
Tags: News, Beer, Craft Beer, Historic Building, Jordan, Local Businesses, Local Happenings, Minnesota beer, Minnesota Craft Beer