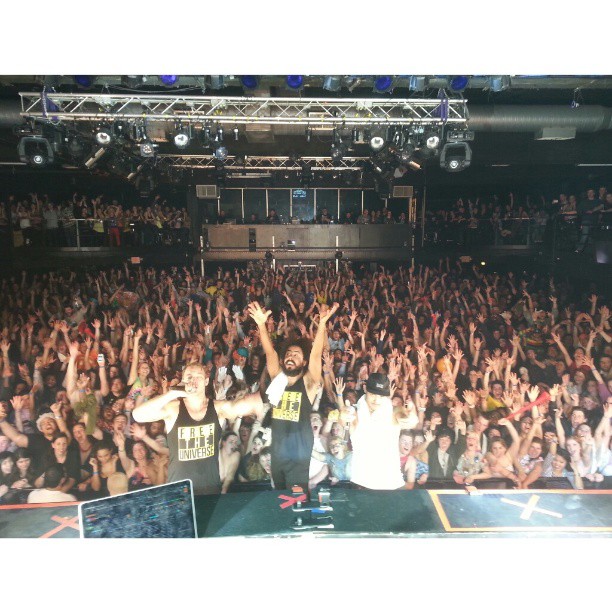 Somewhat surprisingly this show only sold out just as Major Lazer went on at 11:00 Wednesday night and not any sooner. When the Major Lazer intro cartoon ended and the screen at First Ave went up, you could feel the anticipation and energy in the crowd.  The group entered to a low key Rhianna - Stay x Major Lazer mashup, but that quickly kicked into "Mashup the Dance" from their new album, that shot the energy through the roof where it stayed almost the entire time. Fans of Major Lazer may have been disappointed that there were only a smattering of Major Lazer songs, but you couldn't tell by the crowds reaction.  They happily danced, jumped, shook, and stripped whenever the group requested it.  It was more of a DJ set with 3 hype-men and 1 hype-lady/dancer than a Major Lazer "show". The party continued for over 90 minutes with the band providing entertainment along the way.  There was Diplo in the Flaming Lips inflatable ball.  There was the requisite Mad Decent reppin Harlem Shake audience participation.  There was a Pon de Flor-esqe dance drop onto an audience member.   The crowd ate it all up.  The show, however, slowed down a bit once we got to the Express Yourself female participation moment of the evening.  Although humorous at times, and sexy at others, it did bring the show to a halt and deflated the crowd a bit.  I think they had a hard time getting the show back on track and to the previous energy level. Whether you're a fan or not of Major Lazer you would have had to make a concerted effort to not enjoy yourself at First Ave this night.  Everywhere you looked you could see people dancing and moving to the music.  If you enjoy high energy shows and dancing, I'd advise not missing Major Lazer when he rolls through your town.
Tags: First Avenue, Major Lazer, Music