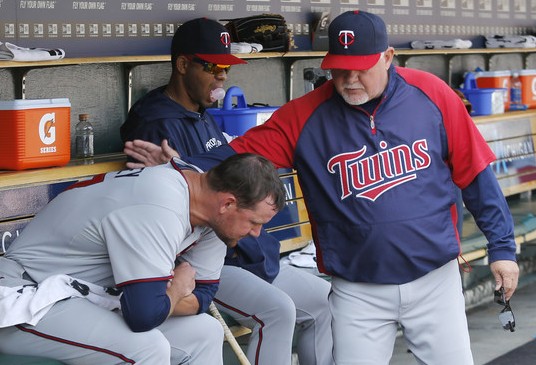 Mike Pelfrey went 5-13 last year with a 5.19 ERA — I'm no expert, but that's bad. Despite his troubles, as a reward for his service, the Twins re-signed him to a 2-year contract due to pay him a total of $11 million in 2014 and 2015. Is it just me, or does $5.5 million a year for a guy who won five games last season — with a +5 ERA—seem a little steep? Maybe the Twins are paying some of that big salary for Pelfrey's positive attitude and its effect on morale in the clubhouse? The video from MLB.com below — which has gone viral — certainly shows some solid evidence that Pelfrey's a hell of a good guy and great teammate, even if he's struggled on the mound lately. Here's the setup: Twins' manager Ron Gardenhire calls Pelfrey — a Wichita State University alum — into his office to give the Shockers men's basketball team a rousing pre-game pep talk (via speakerphone) before their second round matchup against Kentucky... ...aaaand it's really awkward and funny. Ha. That's good stuff. Ron Gardenhire sure has a keen sense of humor in the video despite his rather drab workspace — do all Major League managers office out of poorly-lit, beige-bricked, basements? Can we at least get Gardy something decorative on the wall to liven up that dungeon? Maybe a motivational 'Successories' poster to spruce things up a bit and keep him focused on the team's success in 2014? 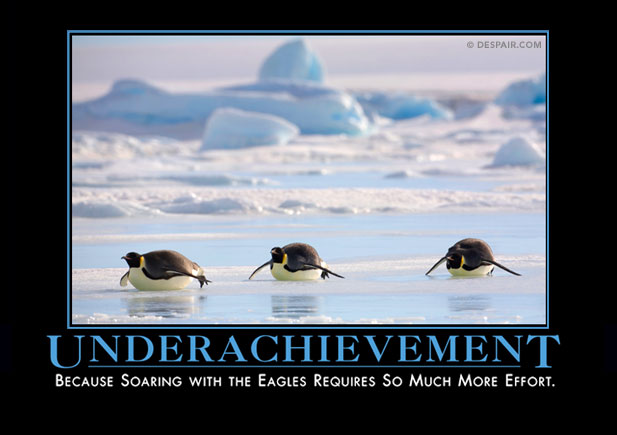 Um, I was thinking of something more... inspiring. But I guess this one does kinda fit the Twins, lately. The Minnesota  Twins open their 2014 regular season is less than a week, traveling to Chicago to take on the rival White Sox next Monday, March 31st at 3:10pm. Stop back to Minnesota Connected for Twins-related news and notes throughout out the year — a year when Gardy — and a (hopefully) improved pitching staff including Pelfrey, Nolasco, Hughes and Gibson is able to shake off the last two disappointing seasons and soar with he eagles... or at least keep pace with the Tigers.   Photos via: Google     Video via MLB.com; Photos via Google
Tags: Videos, Mike Pelfry, Minnesota Twins, Ron Gardenhire, Sports