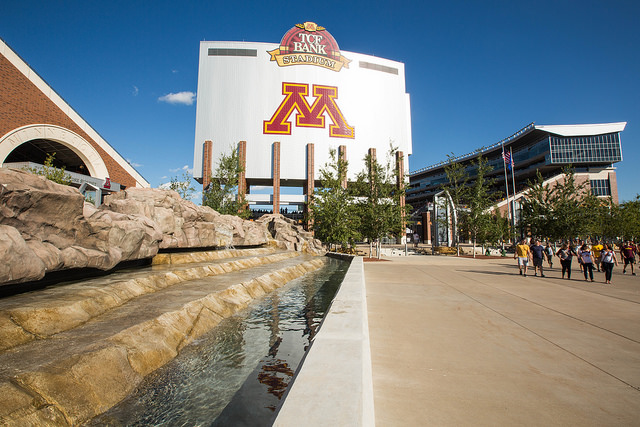 Six games into the 12-game 2014 regular season, the head coach Jerry Kill and the University of Minnesota Golden Gophers are sitting at 5-1 and with their first 2-0 record in the Big Ten since 2004. This week is the homecoming game against Purdue, the perfect opportunity to look at what's happened so far and what's ahead for the 2014 Gophers. So far, David Cobb has 819 rushing yards, well on his way to besting last year's total of 1,202 as well as the school record 1,464 set in 2005 by then-junior Laurence Maroney. The passing game has been less than stellar once again, a sticking point for Gopher faithful for the past few years. Fortunately, the defense has been playing rather well (16th in the nation in points against according to ESPN) even though it lost two top players to the NFL draft (defensive tackle Ra'Shede Hageman and safety Brock Vereen).

The season started out with a 42-20 drubbing of Eastern Illinois, a team that's currently sitting at 1-5. While that is certainly a win the Gophers should, and did, grab, it didn't signal a whole lot about what the team could be this season. At first, it looked like the offense might be more balanced than fans have seen in past years, with 156 passing yards to 182 rushing. The most impressive part was that the Gophers led 42-7 with two minutes left in the game. Heading into the second week of the season against Middle Tennessee State (currently 4-3), the Gophers hoped to maintain momentum and they sustained it through the first half, going into the locker room up 28-0. The Blue Raiders were able to cause a bit of a scare by working their way back into the game before eventually losing to Minnesota 35-24. Another win, another bit of uncertainty over the Gophers performance. Luckily, David Cobb took over the MTSU game with a tremendous outing. He rushed for 220 yards and two touchdowns on 29 carries. The downside was that Leidner managed 67 yards on 5/11 passing with a touchdown to tight end Maxx Williams and an interception. Minnesota next flew down to Fort Worth, Texas to take on then-unranked TCU on Fox Sports 1. The Horned Frogs were expected to be a bit down again this year following up last season's 4-8 team, but TCU has matched its win total from 2013 in only five games and is now ranked 12th after a loss to fifth-ranked Baylor. In the Gophers' worst game of the season, TCU manhandled them 30-7. The Gophers got their only score in the fourth quarter, again to Williams. Leidner's three interceptions and subsequent injury and Cobb's 41 yards on 15 carries represented the beating that the Gopher's experienced in Texas. The team was able to bounce back at home against a weaker (than TCU) team in San Jose State. The Spartans currently sit at 2-3. Two weeks previous to the game against the Gophers, the Spartans were whooped by Auburn 59-13, so they were looking to bounce back themselves, but the Gophers' running game was too much. David Cobb's second 200-yard and two-touchdown performance of the year was more than able to overcome the passing game's inability to move the ball. Backup quarterback Chris Streveler, a redshirt freshman, made the start in the wake of Leidner's foot injury. He threw seven passes, completing one to Drew Wolitarsky and one to San Jose safety Forrest Hightower (sad trombone noise). The dismal performance by Streveler left a little less confidence in the passing game, but Leidner healed in time for the next game against Michigan. 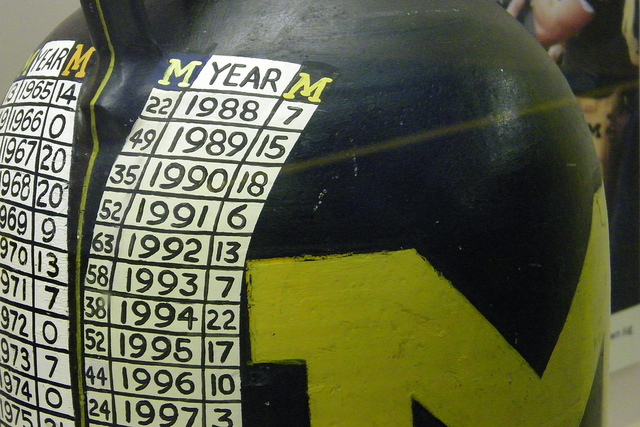 The Gophers showed up to play, physically dominating rival Michigan (3-4) in Ann Arbor with a staunch defense and a well-rounded game. The Wolverines started Shane Morris at quarterback instead of the more versatile Devin Gardner and it cost them. The pressure was dialed up by Gophers' defensive coordinator Tracy Claeys while Morris was shaky, going 7/19 passing with one interception to no touchdowns. The Gophers won the battle for the Little Brown Jug (for the first time since 2005) 30-14 on David Cobb's legs (233 total yards) and an efficient game from Leidner including a touchdown pass to Williams, who has three of the team's four receiving touchdowns this season. Last week came a thrilling finish against Northwestern. The Wildcats were riding high after just taking down 17th-ranked Wisconsin and Penn State before coming to Minneapolis. The Gophers had an extra week to cool off after the Michigan game and celebrate the return of the trophy. They looked prepared for the streaking Wildcats. In the Gophers first win against Northwestern in Minneapolis since 2005, Leidner ran it in for two touchdowns and did a decent job spreading the ball around, although he threw one interception, bringing his season total to five. Williams led the team in receiving and Cobb narrowly missed out on a 100-yard game after toting the football 30 times. It all came down to defensive back Jalen Myrick's beautiful 100-yard fourth-quarter kickoff return to make the difference.

The Second Half: Up Next

This week's 11 a.m. homecoming game is against a 3-4 Purdue team (1-2 Big Ten) the Gophers haven't played since 2012. Since 2005, the series has been split with four wins apiece. The Boilermakers just put up a bit of a fight against eighth-ranked Michigan State after digging themselves a 21-3 deficit to end up losing 45-31 due to an interception returned for touchdown on the final drive. So Purdue might be a bit of a test, unless they're just burnt out after last week's nail-biter. It was probably the best team to have scheduled for homecoming, because the students will be looking for a win to celebrate all weekend. Looking past Purdue, the Gophers have Illinois away before Iowa at home as part of a brutal stretch to close out the season. The final four teams (Iowa, Ohio State, Nebraska and Wisconsin) have a combined record of 18-5. When the Gophers head to Champaign, Ill., to take on the Fighting Illini (3-4) they will be squaring off against a passing-dominant team that will be without starting quarterback Wes Lunt (fibula). With senior Reilly O'Toole at the helm (three touchdowns, four interceptions), the Gophers defense will try to put pressure on him and keep running back Josh Ferguson in check. Hopefully they don't look past the game to Iowa and put up a stinker. 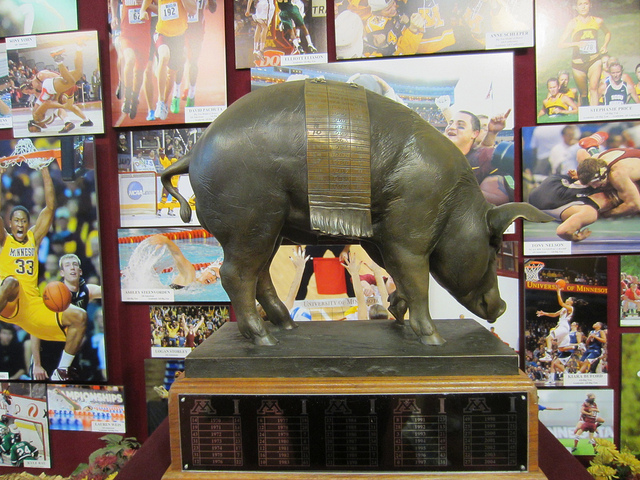 The 5-1 Iowa Hawkeyes will be traveling up from Iowa City on Nov. 8 to keep the Floyd of Rosedale falling into Minnesota's hands for the first time since 2011. Running back Mark Weisman has eight touchdowns, but is only averaging 3.4 yards per carry. Overall, the Iowa offense has been less impressive than its defense. The team has eight interceptions and fifteen sacks through six games, with five sacks from junior defensive lineman Drew Ott. A win here would give the Gophers possession of three of their four rivalry trophies before their final home game. The Ohio State Buckeyes (4-1 and currently ranked 13th in the country) will be the last home game for the Gophers this year. Even though Heisman-hopeful quarterback Braxton Miller has been out for the season due to a shoulder injury, the Buckeyes haven't lost any games they should have won. They also haven't beaten anyone tough, their only loss coming to Virginia Tech in September. The Buckeyes have a strong rushing offense (247 yards per game) and quarterback J.T. Barrett is a dual-threat with 17 passing touchdowns to only five interceptions and is the second-leading rusher on the team. Defensive Coordinator Tracy Claeys will have to make sure the defense is ready for the potent Buckeye offense. Nebraska head coach Bo Pelini has the Cornhuskers ( 5-1) in the top 25 even after losing to 10th-ranked Michigan State two weeks ago. The 19th-ranked Huskers will host the Gophers Nov. 22, hoping to get revenge for last year's defeat at TCF Bank Stadium in which students stormed the field after Minnesota beat the 25th best team in the country 34-23. Nebraska senior running back Ameer Abdullah has 12 total touchdowns and over 1,000 yards total offense, while quarterback Tommy Armstrong Jr. has thrown for 1300 yards and run for over 400 more. The Nebraska offense is dangerous and the defense is no slouch, so it will be a tough game for the Gophers. 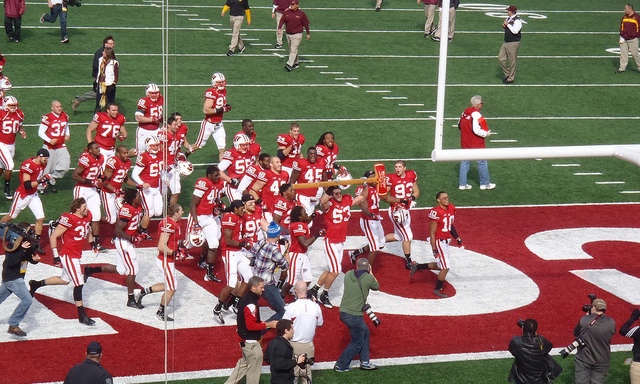 Finally, Wisconsin. Those darned Badgers sit at 4-2 with losses to a ranked LSU team and Northwestern. Minnesota will try to earn back Paul Bunyan's axe for the first time since 2003 in the final game of the regular season. A highly run-based team because of running back Melvin Gordon (1,046 yards, 13 touchdowns) and Corey Clement (476, 4), Wisconsin and Minnesota will both try to pound the ball through each others' lines in what will be the most Big Ten-style game imaginable. It's always a hard fought game between the two teams, but it remains to be seen if the Gophers have the tenacity to take back the axe. They showed something by handily defeating and admittedly down Michigan squad, and for the rest of the season until the end, they ought to be able to build upon that. If the Gophers manage to beat Iowa and then Wisconsin, it would be the first time since 1967 that the Gophers are in possession of all their major rivalry trophies. Gophers fans can only hope that the team closes out as successfully as 1967, also the last time the Gophers won the Big Ten.   Photos by: Matthew Deery -- Corey Seeman -- Jenni Konrad -- Steve Schar
Tags: Jerry Kill, Minnesota Gophers Football, Sports