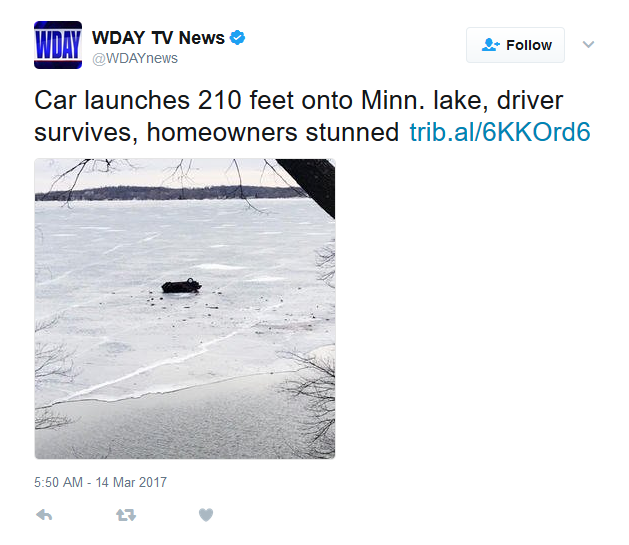 In what is the scariest and most unbelievable story I've heard this month (including Kellyanne Conway's claim that our microwaves can transform into cameras to spy on us), the Pioneer Press reports a Minnesota man launched his car off an embankment, clearing 210 feet of open water, then landing on the ice of Lake L’Homme Dieu in Alexandria. The man — 38 year-old James Sundby of Wadena — then waded back to shore through the freezing water and, badly bloodied, let himself into a nearby home where he took his shoes off and watched some TV. The homeowner Sundby visited, Andy Armstrong, said it seemed clear that Sundby was, well, unclear on what had transpired that night, and how he'd arrived at his home at 3 am.

“It was almost immediately obvious that he wasn’t there to do any harm. He was very apologetic and said, ‘I’m sorry. I’m in the wrong house. I don’t know what’s going on,'" Armstrong said.

Sundby left Armstrong's house on foot after refusing help and was found by police 15-20 minutes later. Alexandria police chief Rick Wyffels said drugs or alcohol did not appear to be involved and no charges have been filed. He called the driver's survival a "miracle." I'm glad to hear Sundby survived a crash that certainly seems as if it easily could have been fatal, and I hope he recovers quickly from any injuries he may have suffered. ** For a bit of perspective on the mind-bending-ness of this crash, according to Wikipedia, the longest jump of Evel Knievel's career took place on December 31st, 1967, when the iconic stuntman jumped 141 feet over the fountains of Caesar's Palace in Las Vegas. Of course, Knievel used a motorcycle, where as Sundby used a car. Knievel also ended up in the hospital for a month after crashing during his landing and breaking his hip, some ribs and a pelvis. Sundby walked away from his crash... through 200+ feet of frigid lake water. For a more apples to apples comparison, the longest 4-wheeled vehicle jump on record, as far as I can Google, is held by Tanner Foust, who jumped 332 feet at the 2011 Indy 500. No water (or ice) was involved. Here's that video:   Image via: WDAY TV News Twitter
Tags: Alexandria, Car accident, Car Jump, Evel Knievel, Kellyanne Conway, Microwaves