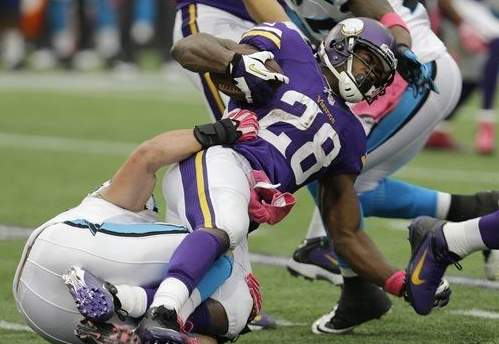 Well Vikings fans, if you thought things couldn't get worse after the Week 3 loss, you were wrong. After a Week 4 victory in London, the Vikings came out so flat against the Panthers you'd swear they were on a shortened week with no time to prepare -- but even after the Bye Week and plenty of time to scout the opponent, the Vikings were absolutely embarrassed on Sunday, by far their worst showing of the season. But by now, Vikings fans should expect this as Leslie Frazier is 0-3 after the Bye Week in his coaching tenure, being outscored by opponents 108-30. This pathetic performance was made by the spectacularly bad defense and finished off by the anemic offense. Anyone who advocated for Matt Cassel as "clearly better than Ponder," I hope you were watching Sunday. Cassel was colossally worse than anything we've seen from Ponder in such a long time -- but honestly, the whole team played like a joke versus the Panthers, and no one, including the coaching staff, is free of scorn. The biggest weakness on Sunday (and this entire season) was once again the defense. Despite the offense barely putting together 10 points (a garbage time touchdown gave Kyle Rudolph fantasy owners something to celebrate), the defense never gave this team a chance to win. There was almost no pushback from the defensive side of the ball -- one sack, no turnovers forced, and 35 points surrendered, that is the formula for zero success. This game just went to show how bad this defense is when it doesn't force turnovers. To provide some context to just how bad the Vikings have been through five games this season, let's take a look at the most telling numbers. In total defense, the Vikings are second worst in the entire league, surrendering an average of 418 yards per game. They have allowed an average 31.6 (antepenultimate in the league) points a game -- the only game this year the Vikings have allowed less than 30 points was against the Steelers, where they surrendered 27. There aren't many games the Vikings are going to win with an at best average offense and a defense giving up 30+ a game. And yes, if you are playing along, I used the word antepenultimate. 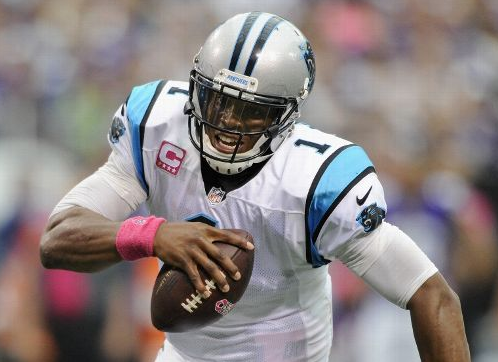 The Vikings have allowed the opposition to convert on third down 49.7% of the time, second worst in the NFL -- on fourth down the Vikings have allowed a conversion 67% of the time, including the two straight fourth down conversions allowed early in the game Sunday. The contest versus the Panthers was simply a microcosm of the entire season for the Vikings defense  -- they cannot stop teams in the most crucial situations, on third and fourth down. If this unit cannot force turnovers, they are without a doubt, toothless. The bread and butter of the Vikings defense is supposed to be getting to the quarterback and disrupting the flow of the opposing offense. The Vikings only have ten sacks on the season, ten, tying the Jacksonville Jaguars for 28th in the NFL. And remember, five of those sacks came in one game against the Steelers. While the secondary got absolutely picked apart by a mediocre passer on Sunday, a lot of that came from the comfort and time Cam Newton had in the pocket from the complete lack of pressure from the front four. Jared Allen, Brian Robison, and Everson Griffen should be ashamed. With no pressure up front, the secondary was dominated by Cam and his receivers. Even with Chris Cook back in the mix, the secondary showed little resistance, especially Josh Robinson. The Panthers (along with every other Vikings opponent) fixated on Robinson every time he was on the field to take advantage of his inability to cover anyone. In the 42 times the ball has been thrown his way this season, 39 of those have turned into receptions. The target in the passing game is most definitely whoever lines up across from Robinson --  if Frazier and the coaching staff cannot come up with a better option, this team is much worse off than fans thought. Robinson lacks the intelligence to operate within the zone schemes, the hustle and determination to recover after he gets beat, and the ball skills to do anything if he is actually in the vicinity of a receiver catching a pass. 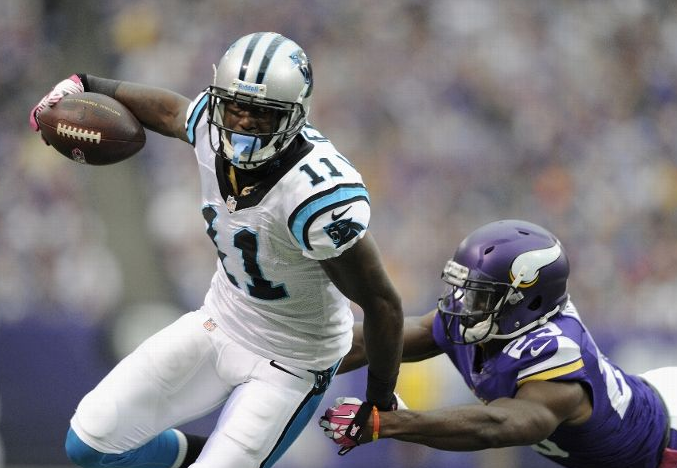 Moving on the putrid offense (I will give a bunch of credit to the Panthers and their formidable defense), it's nice to know there will not be any quarterback controversy when Josh Freeman is ready to go. Matt Cassel came back to reality, resurfacing as the extremely unreliable quarterback that has turned him into a tenured backup. On Sunday he proved his work against the Steelers two weeks ago was merely a product of playing a weak opponent. Cassel overthrew receivers by ten yards, checked the ball down on third and long far too often, was confused by the Panthers well-timed blitzes, and failed to lead any sustainable drives to fight back (garbage time touchdowns don't count). He also threw the ball 44 times, clearly not a recipe for success. The line of scrimmage was stacked to stop Adrian all afternoon, and Cassel didn't make any of the throws to stretch the field and help the offense move. For all those calling for Cassel in the first three weeks, here is what you get. I'm not trying to put Ponder back in the starting role, but I can guarantee he would have led a more potent offense than Cassel. Even with all the headaches we've seen with Ponder, never has he ever led us to such a pathetic offensive effort. The Vikings offense only really put three points on the board -- again, it's hard to count the Rudolph touchdown because the game was in hand and the Panthers were really just looking to kill the clock, not stop the Vikings from scoring. Ponder has never been "only scoring three points" embarrassing, especially lately. At this point, I'm convinced the Vikings would have beat the lowly Steelers with Ponder, even though that isn't really saying much. Cassel just played himself to the bottom of the depth chart -- his play on Sunday was by far the most pitiful play from the position since Donovan McBouncePass. 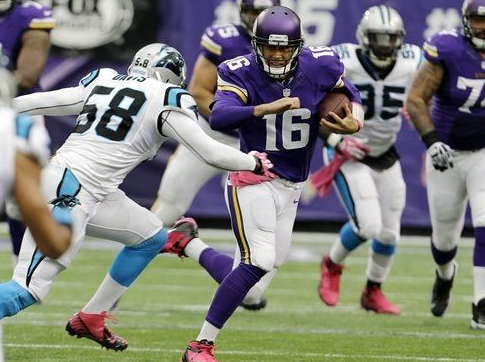 With Cassel playing so poorly, the rest of the Vikings offense never got moving. Despite so many predicting Adrian Peterson having a huge day in light of his recent tragedy, he was never able to leave the backfield without a Panther around his ankle. The offensive line provided no holes for the MVP to run through, and Adrian only netted 62 rushing yards (31 of those yards came on one run). The offensive line has been such a let down this season, they continued their trend by giving Adrian no chance for success. My most pressing question is: how can you only give this man the ball ten times? Ten carries? The Vikings were losing almost the whole game, most of the time losing badly, and Adrian was not having much success, and he potentially was not into the game because of what was on his mind, but ten carries? I mean, Robert Griffin III had nine carries this past Sunday, and he's not even a running back. Lastly, I have to put the coaching staff on the hot seat yet again -- I won't go into too much detail, because you guys can clearly see the results on the field, but this staff is not making a positive impact on the games. Despite the Bye Week, the team looked underprepared on both sides of the ball. There were blown coverages in the secondary, missed assignments when the Panthers blitzed, and no real sign of a "fight" when the Vikings started to really hit a tailspin late in the game. And how much longer is Bill Musgrave going to continue an offense predicated on "check-down" reads? You're down by 32, take a shot, THROW THE DAMN BALL DOWNFIELD! It couldn't possibly get worse, might as well take some chances. Losing by seven more at that point from a pick-six wouldn't make a difference. People had hope after the Steelers game that Cassel injected a downfield attack into the offense -- but maybe Musgrave was just oddly successful, because as it looks now, he seems like a terrible play caller with an inability to change his game plan. With this loss, the Vikings have fallen to 1-4, dashing any hope for a successful season. The only thing the Vikings have to keep fans interested this season is the prospect of Josh Freeman working out -- that and watching Adrian Peterson's individual successes. Next up is a matchup versus the even worse New York Giants on national television -- this game has to be one of the worst Monday Night Football matchups ever, 1-4 versus 0-6. With two teams that bad, at least we know the country won't be watching our embarrassing football team. Photos via: ESPN