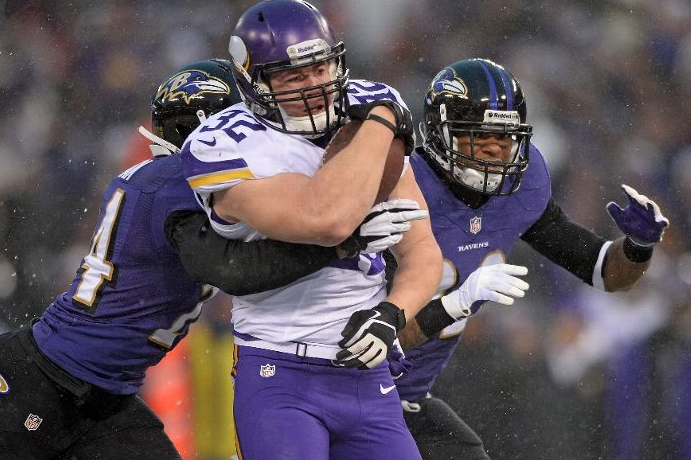 The blizzard of a football game played between the Ravens and Vikings on Sunday had easily one of the most insane finishes I've ever witnessed. The game featured five touchdowns in the final two minutes and one second that had both respective fan bases thinking they'd just won the game in the final moments. Though Minnesota lost, this game is surely one all Vikings fans will never forget. And count your blessings, Adrian Peterson was not seriously injured when tackled on his ankle in the second quarter. Prayers answered. Up until the blitzkrieg of scoring in the final minutes of the contest, the game was slow moving with both teams struggling to weather the elements to play the game. The Vikings defense finally looked ready to play a big role in winning a football game -- they forced three turnovers, they kept Ray Rice and the Ravens rushing attack at bay, and only allowed Baltimore to score seven points in 58 minutes of the game. Xavier Rhodes had another great game, defending three passes and continuing his growing reputation as a shutdown type cornerback. Andrew Sendejo also had three passes defended and Audie Cole led the team in tackles again this week. But then, like four other weeks in this 2013 season, the Vikings defense coughed up the lead, but in this contest, three separate times. But all those "tanking for 2014" fans can rejoice -- they got to watch an amazing finish and they still got their wish for the team to lose for one of those "surefire" draft picks that will completely fix all the Vikings problems. After the game droned on for three quarters and thirteen minutes, all football fans were in for a treat watching Dennis Pitta, Toby Gerhart, Jacoby Jones, Cordarrelle Patterson, and Marlon Brown all scoring touchdowns late. In fact, according to the Elias Sports Bureau, the five touchdowns in just over two minutes was the fastest five touchdowns had been scored in the NFL in 50 years, by more than three in a half minutes. That's why you would call, shattering the record. 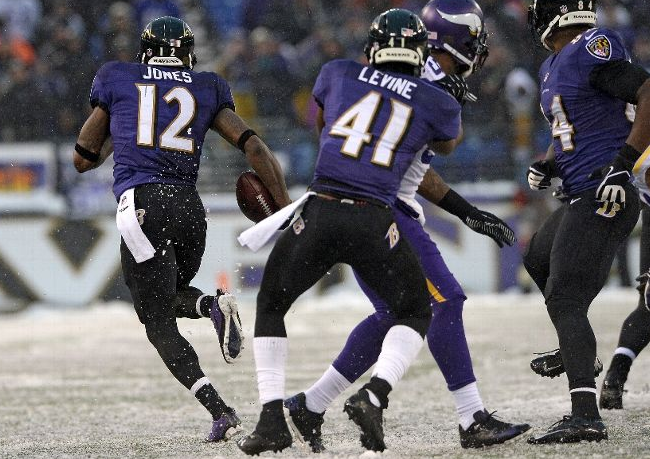 And as I stated previous, the defense really held their own most of the contest -- but for some reason, as the game winds to a close, the Vikings defense always seems to lose the match ups, like Pitta beating Sendejo one-on-one to score the first of the five crazy touchdowns. Previous to Week 14, Baltimore hadn't scored more than three touchdowns in an entire game since Week 3. In the past two weeks, though both wins, Baltimore only scored two touchdowns over those contests. The Ravens are one of the NFL's lowest ranked offensive teams, entering the game ranked 25th overall, yet the defense (and special teams) allowed them to score three touchdowns in just over two minutes. In fact, this has become such a trend this season, the defense coughing up leads in the final minute, the Vikings would actually be 8-5 right now if it wasn't for the last minute of those games. Against the Bears, Browns, Cowboys, Packers (the second match up) and now Ravens, the Vikings lost their fourth quarter lead with under one minute to play. Call it unlucky, but if you look back at those last minute scores, many of them were made possible by the Vikings failing to properly match up versus the opponent, creating a disadvantage for the defensive unit (like Chris Cook on Martellus Bennett in the Week 2 Bears loss). 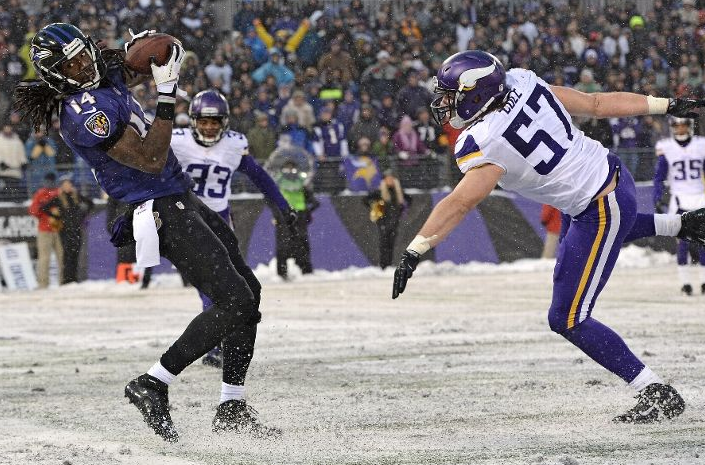 Even so, you have to give Joe Flacco and Marlon Brown a ton of credit -- it's impossible to defend a pass that perfect and a catch that well executed. But to be fair to the defense, that last second pitch and catch should have never happened -- that pass interference call on Chad Greenway that nulled a Sendejo game-ending interception was one of the worst calls to go against the Vikings this year. And that was not the first blown call of the game -- how could any referee in their right mind, watch a slow motion replay of the Gerhart fumble in the first half, and still call it a fumble? His knee was planted in the ground by the time he "fumbled." Those two blown calls led to 14 Ravens points -- no team, good or bad, is going to win many contests playing against two opponents in one game. The Vikings offense for the second straight week has looked formidable. Although both weeks the unit moved the ball more than they scored, they scored when they needed to in the crucial moments. After the Pitta touchdown with 2:01 left in the game, Cassel made a huge 27 yard completion to Jerome Simpson, and then the drive was topped off by Gerhart's 41 yard touchdown run. Cassel once again proved he is the right man to be leading this offense -- he had another respectable day, throwing for 265 yards and two touchdowns on 17-38 passing -- his zero turnovers is the best number on his stat sheet. He distributes the ball much better than Ponder as he can progress through more than one read. All the Vikings weapons get into the mix with Cassel at the helm, and the likes of Simpson, Patterson, Carlson and Jennings are all thankful for that. For his efforts, Cassel was named the starter for this Sunday's game against the Philadelphia Eagles. And Patterson, what a big game the rookie had. That bubble screen touchdown was a beast of a play, outrunning the Ravens defense in the snow covered field when most Vikings fans thought all hope was lost. Patterson has come along nicely in 2013, and his evolution this season is part of the reason you always want your football team fighting, even despite a poor record. 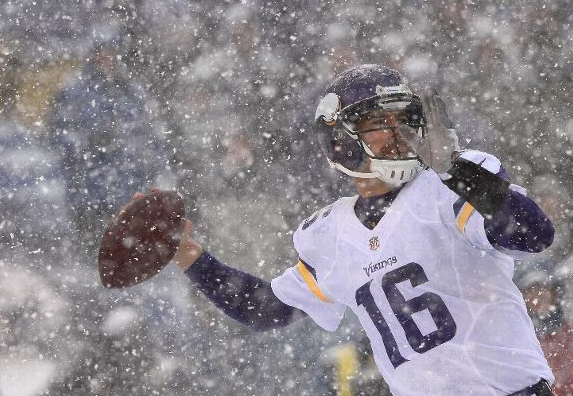 It's also worth noting, the unit I've been bashing on all year, the offensive line, did not surrender a single sack (and Cassel was only hit twice) on Sunday and helped the rushing game rack up a commendable 114 yards. I guess all we need for this unit to be dominant is a frozen tundra playing field -- huge advantage for a squad playing their games at the outdoor TCF Bank Stadium next year, right? Though the Vikings lost again, like the Week 9 loss to Dallas, it's great to see these guys fighting until the bitter end (even though, despite the fight, they cannot actually stop). This game is not one Vikings fans will remember as a heart-breaking loss (the team is 3-9-1) -- it will be remembered for the two teams weathering the blizzard and turning in one of the greatest finishes in NFL history. As ESPN calls games like this, Ravens/Vikings 2013 was an 'Instant Classic.'  Photos via: Getty Images