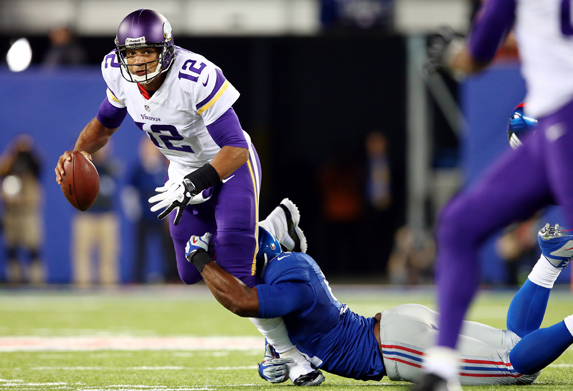 After Week 3 and Week 6, Vikings fans were left shaking their heads in disbelief to just how far their favorite football team had fallen. Well, a Week 7 embarrassment on national television compounded all that disbelief into a state of numbness. Is this team really this bad? After watching what I can easily call one of the most pathetic NFL football games I've ever seen, the answer might be yes. The Tampa Bay savior turned out to be the worst quarterback the Vikings have fielded this season, and that's saying something considering the uninspired quarterback play in 2013. While this most likely is not rock bottom for Minnesota in 2013 (they play Aaron Rodgers next week), it sure feels like it. Before jumping into what will surely be nothing but a long-winded, scathing rant on how bad the Vikings are, let's take our hats off for just a moment to appreciate the brilliance that was Jared Allen's sack on Eli Manning. Even despite how bad this season is destined to be, that sack will live in our minds forever as one of the greatest defensive plays made in a Vikings uniform. Well now that I got the highlights out of the way... (Allen still only has 4.5 sacks on the season) 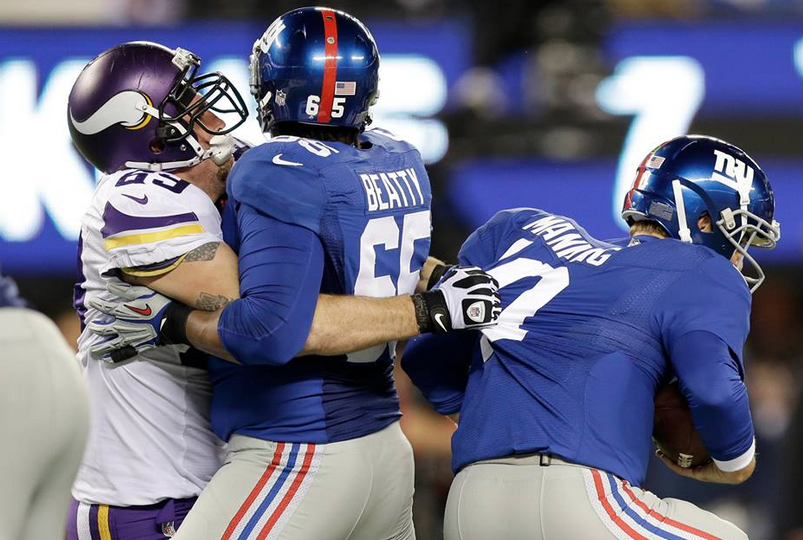 Josh Freeman clearly is the first thing that comes to mind at the mention of the game Monday night. Watching a "potential savior" overthrow receiver after receiver was like a recurring nightmare -- he overthrew 16 receivers in his Vikings debut. And for some reason, Josh Freeman still threw the ball 53 times, only completing 20 of those passes. In case you're counting at home, that's a 37.7% completion rate. The Vikings were really trying to gauge just how much Freeman could execute from the playbook, hence why he threw so much when the game was already decided. He proved to have little understanding of the plays, almost no timing with his receivers, and showed an inability to make even the most basic of throws. Even watching Freeman complete 20 passes seemed like a miracle. I'm not going to argue Freeman will be a bust here, but at this point, it's impossible to say he's ready to start for the Vikings. I know it pains Vikings fans to hear this, but Ponder should start for the time being (and it is rumored he will start versus the Packers as Freeman was reportedly concussed Monday night). Unless you are in the "lose as many games as possible for a higher draft pick" camp, Ponder is the best bet to be competitive moving forward. Although this season is clearly lost, I definitely cannot handle watching many more games like the debacle Monday night. Even though everyone wants to jump on Freeman for blowing the game, I once again have to point a finger at the Vikings atrocious offensive line play. Freeman obviously could not execute his part, but he has only been a Viking for 14 days. Yet, time after time Freeman was making decisions in a collapsing pocket -- even though Freeman was only sacked once, he was hit 13 times. The offensive line, along with Josh Freeman, messed up many of the blitz pickups when the Giants rushed more than four. With Freeman constantly under duress, he never had a chance to get comfortable in the offense. That criticism pales in comparison to the way the offensive line performed blocking for Adrian Peterson. The best running back in the league had another appalling effort, only netting 28 yards on 13 carries. He only has 90 rushing yards in the past two weeks combined -- totals like that will leave Adrian light-years away from his goal of 2,500 yards. Again, I have to ask the question why Adrian rushed 13 times while Josh Freeman threw 53 passes? The Vikings conceded the game the second they crafted a game plan that pass heavy. Adrian once again had no running lanes and was hit in the backfield or at the line of scrimmage more often than not -- over the past two weeks, it's been odd to see Adrian break off even a five yard run (AP's long run Monday was eight yards). Re-watching the game film, I was shocked to see the offensive line work so poorly together -- one of the five members of the line got beat each and every running play. Even last season, with eight men stacked in the box, the Vikings still had plenty of success. This year, the offensive line has not given Adrian the same opportunities. 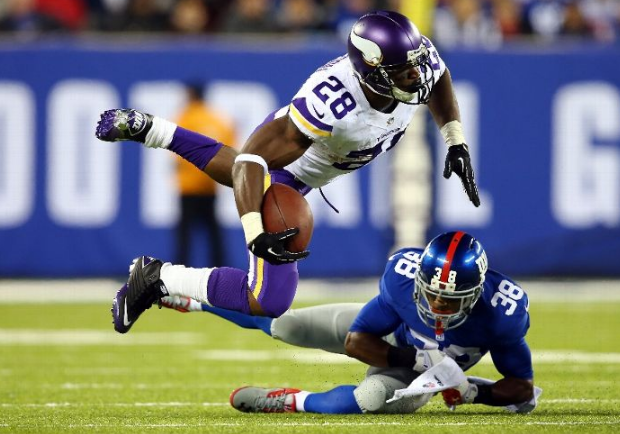 Poor Marcus Sherels. He could have had the game of his life --  his punt return early in the contest gave Vikings fans faint hope the team could compete versus the struggling Giants. Later in the night, Sherels went from dropping an almost surefire pick-six to fumbling the football in Vikings territory and setting the Giants up for an easy Peyton Hillis touchdown. Those two plays were the turning points of the game, the moments Vikings fans knew the night was not going to end well. Sherels went from making a dandy on special teams, to potential hero with that dropped interception, to team schmuck who fumbles without being touched by the defense. The Vikings defense once again spent most of the night on their heels, making almost no plays in their zone coverage, reactionary defense. All night the secondary sat in zone coverage hoping the front four would get home and pressure Eli Manning. The Vikings did mix in some blitzes, the double A gap blitz that Jon Gruden referred to during the game, but later in the match the blitzing became ineffective. There was also a theme of Giants running backs leaking out of the backfield and catching easy check-down passes, oftentimes in crucial situations to extend drives. The Vikings line backers were rarely on the ball to actually defend the pass, something the Giants utilized to move downfield all night. There seems to be such little aggression in the Vikings defense -- they are completely reactionary, working at their "bend but not break" defense. But this defensive unit doesn't have enough tools to not break -- the team is 1-5 -- it's time to say "What the hell?!" and start getting more aggressive in the secondary. Let the defensive backs try something new, because at this point, the current working scheme is a disaster. 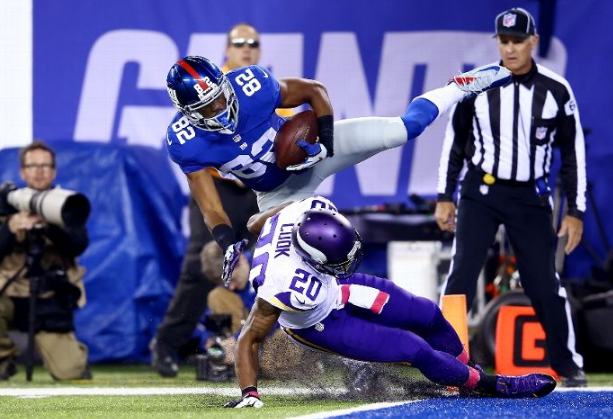 The Vikings defensive backs were rarely combative (especially at the line of scrimmage), and got beat by both Hakeem Nicks and Victor Cruz time after time (though Nicks and Manning botched plenty of plays). Xavier Rhodes especially had a bad game -- he was far too often out of position and made a habit of failing to jam the receivers at the line of scrimmage. Chris Cook didn't have trouble as much in coverage, but he once again showed why he has no career interceptions. On the Giants second quarter touchdown, Cook was step for step with Rueben Randle, turned around in time to find the ball, yet made no play -- Randle was the one desperate to pluck the football out of the air. If Cook couldn't haul in that interception, I'm not sure he'll ever grab one. The Vikings defense only squandered 23 points, but for those watching, you know it could have, and should have been a lot more. Manning and the Giants offense proved why they were 0-6, missing so many opportunities to stomp on the Vikings early (that missed Hakeem Nicks touchdown pass in particular). This game against an 0-6 team should have been even more lopsided, a testament to just how poorly Minnesota is playing right now, in all three phases of the game. I will give credit to Erin Henderson and Jamarca Sanford -- both were flying all over the field making plays. Those two consistently made their tackles, despite Henderson not playing great in pass coverage. 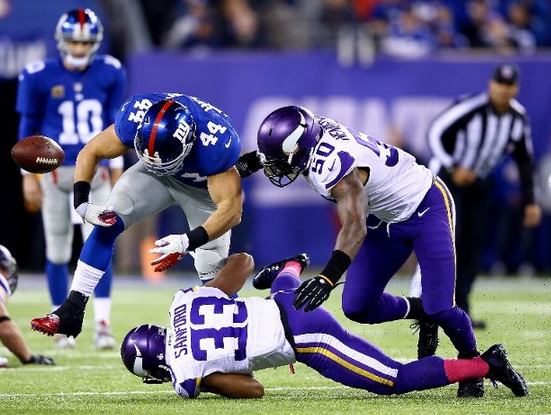 In the aftermath of the game, the buzz in most of my social circles suggested everyone needed to go. Frazier, Musgrave, and even GM Rick Spielman. I can definitely see the argument for replacing the coaching staff, but it's hard to argue that Spielman has done anything but stellar work since taking over. His work in the draft and free agency thus far has done little else but help improve this team. On paper, most thought the Vikings were going to be in playoff contention in 2013. That's all a GM can do, assemble the best team on paper -- it's the job of the coaching staff to make the rest work. And also consider that Ponder was Spielman's guy, yet he still made the move to bring in Freeman to try and give this team the best chance to win. Frazier and Musgrave many would argue are not working out (I'm pretty sure I agree), but I'd argue Spielman has done a very good job assembling a competitive roster (though so few have played up to their billing). Not much is working right for the Vikings right now, which is a declaration to poor preparation and coaching. Should they all be fired? If it stays this way, I can't argue no. One thing is for sure, Spielman has done more than enough to earn credit for putting solid talent on this roster. It's tough to swallow the thought that only seven weeks in, the season is already lost for the Vikings. The hope now is that each week there are small victories within the many upcoming losses. It would be nice to see young players developing and becoming more reliable on the field. And the biggest hope is that Josh Freeman begins to understand this offense -- for so long fans have hoped this team would find the coveted franchise quarterback. For far too long we have been without consistency at the quarterback position, a setback that has kept this team from ascending the ranks as a perennial playoff team. Is Freeman the answer? At this point the outlook is not favorable -- but it's hard to blame the kid, he was thrown right into the lion's den -- from here we have to hope he slowly morphs into something substantial, because I don't know about you, but I can't handle many more seasons of mediocre quarterbacks. Photos via: ESPN