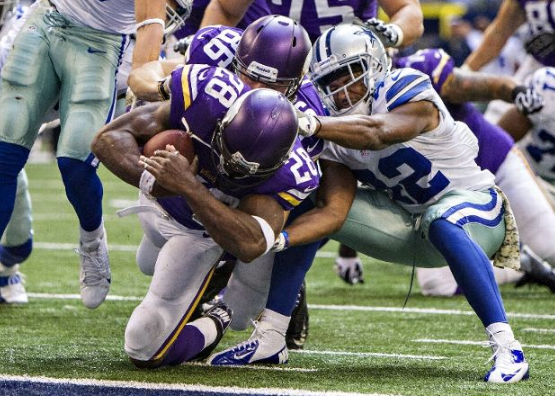 While 1-7 is not where anyone who plays for, or roots for, the Vikings was hoping the team would be by Week 9, it's rewarding to see the squad is still fighting to win ball games. Yes, I know winning games at this point is counterproductive, but that doesn't mean the team should give up. A top five 2014 draft pick is the ultimate goal at this point, but few want the team to just roll over and die. I know there are those who do want the team to stop fighting, but you lot might as well just quit reading these articles and quit watching the 2013 Vikings. So even though I know the season is over and I'm hoping for a great 2014 draft pick, I am not, I repeat, not, rooting for this team to flounder the rest of the year. Seeing this team fight despite their awful record is what I'm hoping for, a group of players with some pride, and the Vikings displayed that Sunday versus the Cowboys. The fighting spirit was on full display when Adrian Peterson scored that monster touchdown, a run where he (with the help of Chase Ford, who deserves a lot of credit for that score) dragged a handful of Cowboys to pay dirt. The team was fired up, celebrating the legendary run. The same can be said when AJ Jefferson intercepted Tony Romo's fourth quarter pass. The sideline was jumping around, invigorated after Jefferson made the great play. 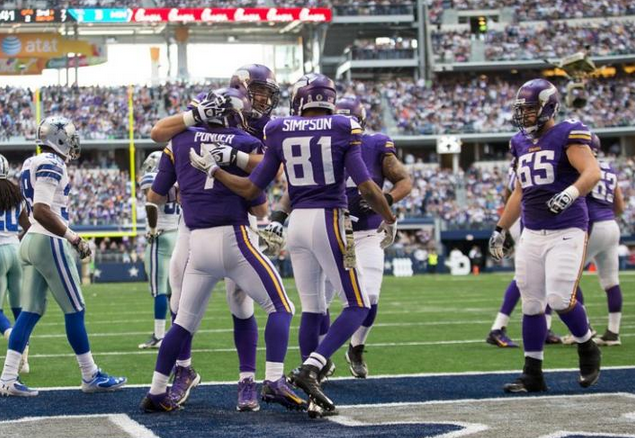 But just like the Vikings team we have become accustomed to this season, the defense coughed up the lead late in the game and the Vikings lost by one score. Although the defense faltered late, a lot of credit has to be thrown their way. In a game where many, including myself, thought Romo, Dez Bryant, and Jason Witten were going to have a field day, the defense held their own most of the game. Especially Josh Robinson, who was for the most part matched up on the Bryant -- the dynamic Dallas receiver was frustrated for most of the day despite still catching a respectable six passes for 64 yards (it could have been more if he didn't drop the pass in his bread basket in the second half). Even with the Cowboys essentially abandoning the run (DeMarco Murray only had four carries the entire game), the Vikings depleted secondary stood tall against the Cowboys potent attack for most of the contest. The success can be directly attributed to the pass rush getting home and pressuring Romo -- the Tampa-Two scheme is predicated on getting pressure with the front four, and the Vikings showcased that Sunday. The team only notched three sacks and three quarterback hits, but Romo was under duress much of the day (except on the game-winning drive). It's also worth noting, the Vikings defense had seven tackles for losses, a return to form many Vikings fans have been waiting to see the entire year. Even despite keeping the Cowboys offense in check  most of the game, the defense once again wavered on the final drive of the opposition. Romo completed a pass on the goal line to Dwayne Harris with under a minute left in the game, the final nail in the Vikings Week 9 coffin. On that final drive, Romo was able to sit back in the pocket and pick apart the Vikings defense, completing seven of his nine passes (one incompletion was a throw away). Much of this had to do with the passive play calling from defensive coordinator Alan Williams -- instead of continuing to dial up the pressure that had worked most of the game, the Vikings sat back in prevent coverages. No longer are fans simply questioning the play calling on both sides of the ball, but now players are starting to become discouraged. 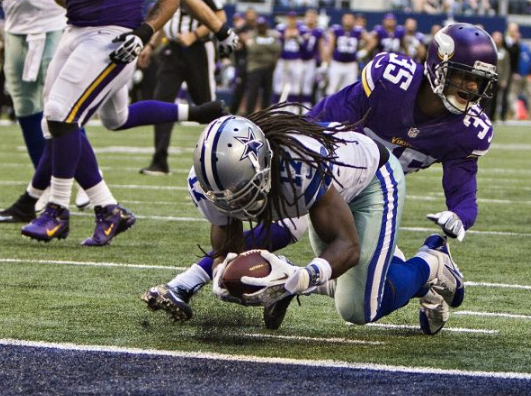 This type of questioning is what has fueled so much dislike for Leslie Frazier and his coaching staff, particularly offensive coordinator Bill Musgrave, as well as Williams. Musgrave made some poor play calls late in the game, electing to throw the football, clearly the offensive weakness on this team, instead of running AP and running time off the clock after the Jefferson interception. It's clear this team still has enough respect to keep fighting for Frazier, as displayed by their will to battle all game versus the Cowboys. Even though the players respect Frazier, I still am with the camp who believe this coaching staff needs an overhaul. There are a handful of losses at this point that can be directly attributed to poor play calling, the first three weeks in particular, and that is something that needs to change. It was encouraging to see Adrian Peterson running the ball like his usual dominant self, notching 140 rushing yards and one touchdown on 25 carries (good job Musgrave, 25 carries, not 13). The offensive line provided the MVP with ample opportunities to make plays, and he capitalized. With AP being a focus of the offense again, you could see the energy radiating in his play. The offense was once again driven by their work horse, which helped take the pressure of Ponder to make lots of plays in the passing game. 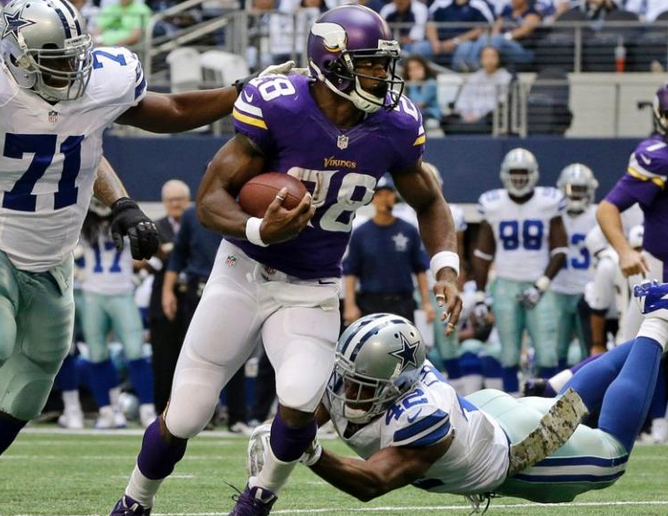 And for those ridiculing Christian Ponder, once again, you have to acknowledge a game like this one and at least give the man some respect. I still agree he is not the future for this team, unless his passing performances significantly improve, but he still has done enough to put this team in a position to win in almost all his starts this year. Even though he still made some passing mistakes, Ponder went 25 for 37 (a completion percentage of 67%) for 236 yards and one score. He also had a rushing touchdown, once again showcasing his best attributes as a quarterback, as a runner. Ponder was solely blamed by most for the sack in the Vikings end zone that resulted in a quick Cowboys touchdown. That situation has three people to blame -- first, Cordarrelle Patterson for muffing the catch on the kick off, putting the Vikings deep in their own territory. Second, J'Marcus Webb, who replaced the concussed Phil Loadholt, was burned instantly on his first play by George Selvie. It's no wonder why the Bears cut Webb this past August -- he was one of the key components to the Bears joke of an offensive line a year ago. Selvie was around Webb before the play even started to develop. And thirdly, blame goes to Ponder, who needs to have situational awareness and know that he held the ball just a touch too long. 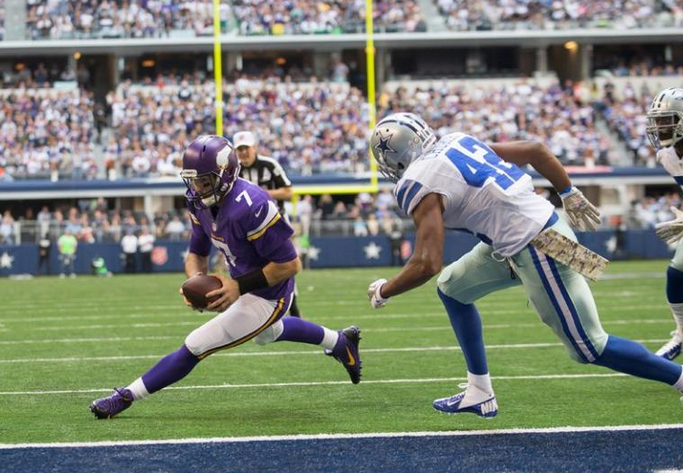 I will again reiterate, I don't think Ponder has a bright future in the NFL because he falls into the Tim Tebow category: a player who can get it done with his rushing, but not his passing. But Ponder has clearly demonstrated the starting job should be his, unless you are with those who want the Vikings to tank the rest of the season -- then you should put in Cassel or Freeman. But what if, just what if, Ponder is falling prey to the poor play calling everyone hates so much? Play calling is obviously a huge component of success on both sides of the ball, and if Musgrave is such a poor play caller, couldn't some of his ineptitude as a coach be a factor into why Ponder has had such little success? Of course, missed throws and passing inaccuracy is all on Ponder -- but some of the play design and calls put Ponder in tough spots, making him sometimes look worse than his talent leads on. Even with Ponder looking so mediocre, it's hard to place all the blame squarely on his shoulders. It's unlikely we will ever get to really know, as Ponder most likely will not get another actual chance here. Maybe another NFL stop and a new play caller could help Ponder grow as a passer. Lastly, I have to remark on Blair Walsh missing that extra point. The second year man out of Georgia has rarely been in the crosshairs, but missing an extra point? C'Mon Man. That one point meant the difference between the Vikings needing a touchdown instead of a field goal on their final drive. Not that a comeback would have actually transpired, but missing the PAT for a professional field goal kicker is unacceptable. While the Vikings fell to 1-7 this past Sunday and face another tough matchup versus RGIII and the Redskins Thursday night, it's nice to see this team has not given up on the season. It's promising to see a group of men with a sense of honor towards the team who pays them handsomely, and the fans who watch them faithfully. Even though this season is all but over, watching a team roll over for eight more games is not something I want to see. Photos via: ESPN and Vikings.com