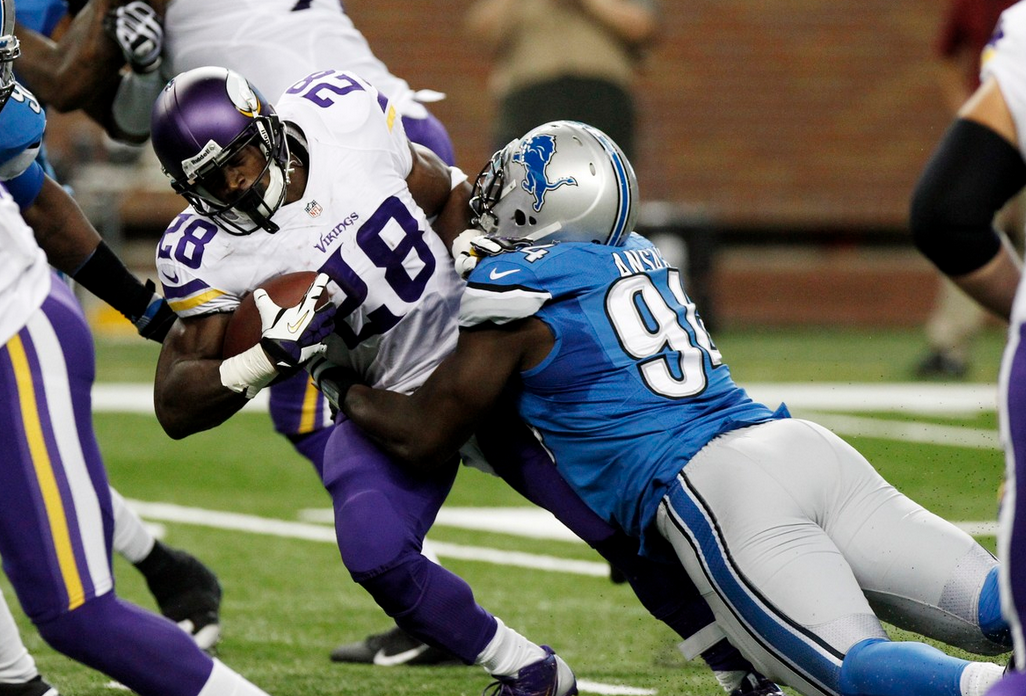 What a roller coaster ride Week 1 was for Vikings and Lions fans -- the ups and downs for both teams was crazy. From the standpoint of a Vikings fan, not a whole lot of positives to take away from this game. No surprise from the flocks of Vikings fans, most are calling for Ponder's head and blaming the loss on him. It's hard to convince the horde, but from my eyes, it's hard to place the majority of the blame anywhere else besides the defense that didn't put up much of a fight and the offensive line that didn't win a battle all day. But yes, Ponder also did play poorly. Of course, the game started off the way every Vikings fan would hope -- Adrian Peterson to the house, one rush, 78 yards -- 2500 rushing yards didn't seem too crazy in that moment. But that was Adrian's only highlight of the day despite scoring on the goal line twice later in the game. Adrian disappeared in this game, a result of the offensive line providing AP with no running lanes and no daylight to run towards. After his 78 yard run, Adrian recorded 15 yards on 17 carries. Yikes.

The offensive line, even 2012 Pro Bowler Matt Kalil, was beaten into submission by the Lions front four. Kalil was taken to school by Lions rookie defensive end Ezekiel (Ziggy) Ansah -- we didn't see Kalil get dominated much last year. The Lions do have a formidable front, but the Vikings offensive line was supposed to be just as formidable, and they got pushed around and dominated on almost every play. You expect two heavyweights to exchange blows, but the Vikings unit was on the mat after the first round. This poor showing allowed the Lions defensive line to disrupt plays, chase Ponder all around, and stop Adrian in his tracks. Without a doubt, the offensive line destroyed any chance the Vikings had to win. They were manhandled. Their piece would be the biggest on the "blame pie chart." I was shocked to see them perform so poorly, a healthy unit of starters all returning from a rushing crown (and almost record) and overall strong season. Of course, I could not possibly recap the game without referencing the inconsistent play of Ponder, again. Back for 2013 was the shaky, inaccurate Ponder we all grew to despise last season. While the offensive line didn't give him any help, he didn't look the part of an offensive leader on Sunday. There were far too many times when he had zero time to throw the football -- but there were also openings where he didn't take advantage. Some of his throws were on the money while others left receivers to make the plays. Accuracy has been an issue with Ponder and Sunday didn't bolster his resume. He threw three INTs, one of which was not his fault (the tipped ball from Jerome), another where he was trying to throw out of bounds but had his arm hit (this one was the most costly turnover of the game), the third a forced throw in garbage time. Again, the line should be ashamed of themselves and the way they blocked up front for AP and Ponder, but both need to step up and make plays on their own. And to point out, Ponder threw for 11 first downs, while the team only rushed for 3. The Vikings strongest pillar did not hold up when needed. 3 rushing first downs? Isn't Adrian Peterson on the team? 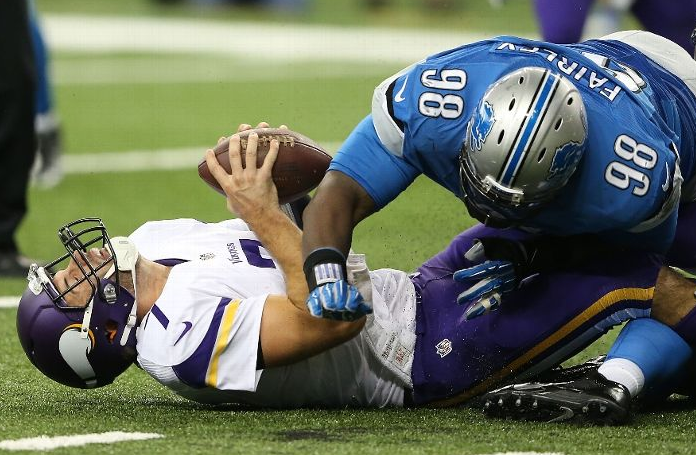 Worst of all, the Vikings had 5 three-and-outs and 4 turnovers. This was the reality for Vikings fans last season -- too many three-and-outs, leaving the defense on the hook and on the field more often than not. The Vikings also only converted (2 of 10) 3rd downs -- the Vikings didn't help themselves constantly ending up in 3rd and long situations, which makes the prospect of getting a 1st down even harder. The lone bright spot for the Vikings on offense was Jerome Simpson. Last year's free agent dud is trying to prove he is not a useless wideout. 2012 was plagued with suspension and injuries for Simpson -- now healthy, Simpson played like we thought he would last year. He stretched the field, caught 7 passes for 140 yards, and was Ponder's go-to-guy in crucial moments. Bill Musgrave, the Vikings offensive play caller, was again not showing he has a feel for this offense. Pretty early in the game it was clear the Vikings offensive line was not winning the war in the trenches -- Musgrave's play calling didn't reflect this, as he never seemed to dial in on short passing routes or utilize his Pro Bowl tight end Kyle Rudolph. Where the hell was Jennings? Or why didn't he dial in another bubble screen to Patterson? It worked so well the first time -- get the ball into his hands and let him run. A reverse maybe? There are times when the Vikings are way too predictable and Sunday was no different. With Adrian and the offensive line getting no push, time to move to plan B. Even if Ponder can't execute said plan in theory, a change of pace really would help, and the game plan never seemed to adjust within the contest. 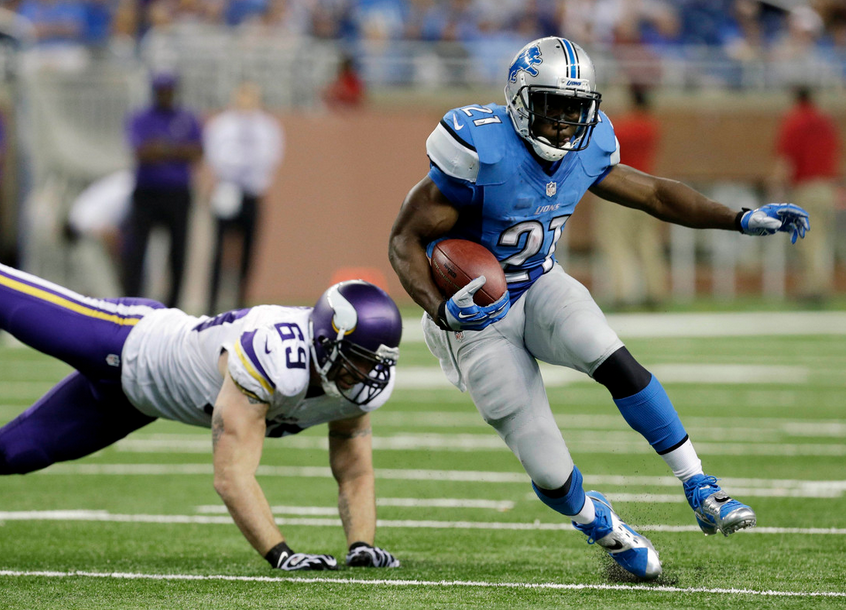 The Vikings defense was supposed to be much improved this year. Sunday showed they either really did not become a stronger unit over the offseason or that we, like many other teams, just cannot contain Reggie Bush (Reggie always seems to burn the Vikings). The Lions offense moved at will the whole game. Stafford had all day to throw in a big comfortable pocket. Sure, we "slowed" down Megatron (he was literally inches away from one touchdown and a silly "process of the catch" rule away from another), but the Lions adjusted their game plan and utilized Reggie Bush to the max. The impact of Kevin William has never been more evident than Sunday as the Lions rushed the football between the tackles and down the Vikings throats. No Vikings defensive player made an impact aside from Harrison Smith. He was flying all over the field making tackles (punishing Reggie once) and the only player who seemed to really show up on game day. Josh Robinson made a nice strip on Brandon Pettigrew -- but who are we kidding, everyone strips Pettigrew. Chad Greenway and the linebackers were eerily absent from the game, only making tackles after big gains. The defense was scary bad on Sunday -- it could have been a lot worse if the Lions had capitalized on a few more of their opportunities. Even despite being outplayed in nearly every facet of the game, for awhile in the second half the Vikings were in this game. The turning point was early in the 4th quarter when the Vikings were only down by 3 -- the Lions drive hit the skids and failed to convert a 3rd and 18 -- but wait, a roughing the passer penalty on Letroy Guion gave the Lions an automatic first down. That seriously was one of the most candy-ass penalties I have ever seen. Guion grazed Stafford's helmet as he was going to the ground and the refs bailed the Lions out on 3rd and extra long. What a joke the way the refs over protect quarterbacks in the NFL. I understand hits to the head, but touching the helmet with your hand cannot be a penalty. Then, later in that same drive, the Lions again fail to convert, but the refs bailed them out again calling rookie Xavier Rhodes for pass interference on Megatron. Despite the ball being 5 yards out of bounds and uncatchable, they still called it. Such crap. This was not a start Vikings fans wanted to see -- we were in the game and could have stole one had we played a bit better. But that isn't saying much as the immaturity and stupid plays of the Lions cost them from really blowing the game wide open. The Vikings were outplayed in every aspect of the game (maybe as Common Man always says, "It's the year of the cat.") -- that is a bad sign for a team moving onto the Solider Field next week to play the 1-0 Bears. Photos via: ESPN and NFL.com