Minnesota Wild Kick Off Season with Training Camp and Scrimmages 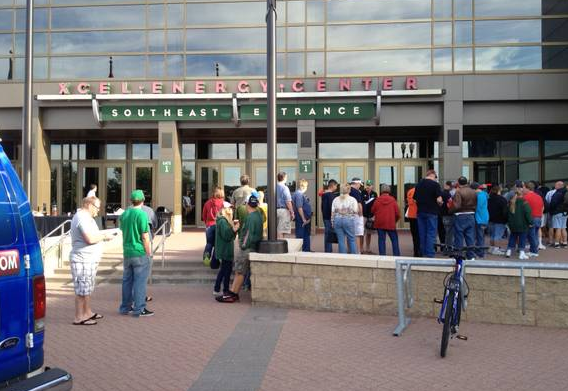 Today the Minnesota Wild hosted a training camp session at the Xcel Energy Center so fans could get a glimpse of favorite players, new acquisitions, and up and coming young talent. The event was in tandem with the Wild's regular season tickets going on sale -- the line for the tickets was very long, as expected seeing the success the Wild experienced last year and the hype around all their budding talent. While the ticket line was long, there was no fuss to get into the Xcel itself to watch the team practice. We walked in without any congestion of foot traffic. The fans were only allowed to sit on one half of the ice, but there was more than enough space to spread out and sit wherever you wanted. I attended the event with my cousin Andrew, and the two of us were able to sit at the best vantage points to take in the entire practice. There were two practices today, one starting at 9:30 am and the other at 11:00 am. During the first practice Andrew and I were wondering where new free agent acquisition Matt Cooke was, veteran Dany Heatley, as well as blooming talent Charlie Coyle. Thankfully we got a look at these players at the second practice. Participating in the first practice were most of the Wild stars like Zach Parise, Mikko Koivu, Jason Pominville, and my favorite hockey player, Ryan Suter. 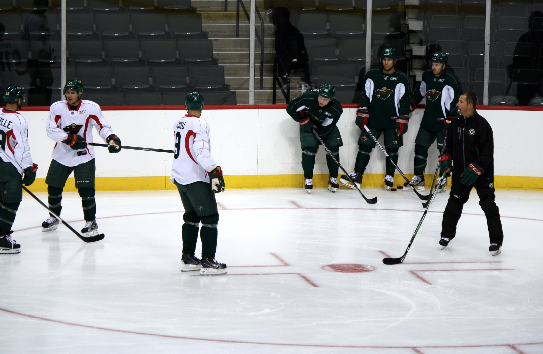 The teams participated in a lot of standard drills, skating exercises, and worked on moving the puck to get quality shots. There was a goalie guarding each net, Niklas Backstrom on one end and Swedish talent Johan Gustafsson at the other. The whole ice was used, as the team would skate though a drill on one end and fly down the open ice to the other and try to finish against one of the two net-minders. Practice would stop and head coach Mike Yeo would call the group over to talk strategy as he would draw the next drills on his dry erase board shaped like an ice rink. It was fun to watch the teammates battling one another, not with full contact mind you, for pucks, position, and quality chances at the net. The most enjoyable thing for me was being down on the boards and soaking in just how fast these pros are on the sheet of ice. 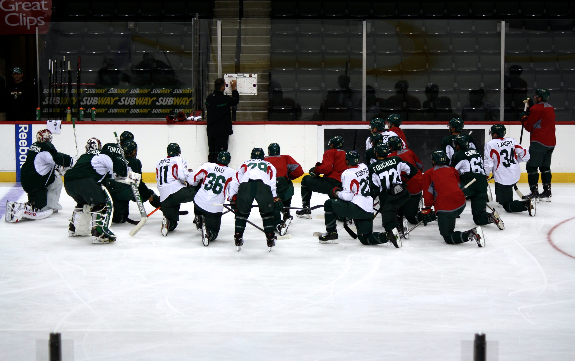 After the early morning session, the ice was resurfaced and the second group of guys came out -- this second practice was just as big as the first. It was then clear why the practice was broken up into two sessions, there were too many guys in the training camp for one big practice. A lot of the guys participating in today's practices will not make the NHL team, but it's good to have a look at future Wild talent. Aside from the faces we all know and love, Wild fans were able to get a closer look at former Pittsburg Penguins winger Matt Cooke. This tough guy has made a name as a scrappy player in the NHL, and he is one of those guys you hate to compete against but love to have on your favorite team. He looked the part of a veteran player in the drills and was mixing it up with a lot of the guys on the ice. The fans in attendance were also able to get an up close look at (hopefully) future all-stars, defenseman Matthew Dumba and winger Nino Niederreiter. Both have a lot of buzz coming into this season -- while they may not make the big league roster this season, they are talents to keep an eye on for the future. Fans will notice Niederreiter is wearing the number 22, a number previously held by fan favorite Cal Clutterbuck. The new number 22 for the Wild may not have made a big splash with the Islanders to start his career, but many in the organization have high hopes for his talent. 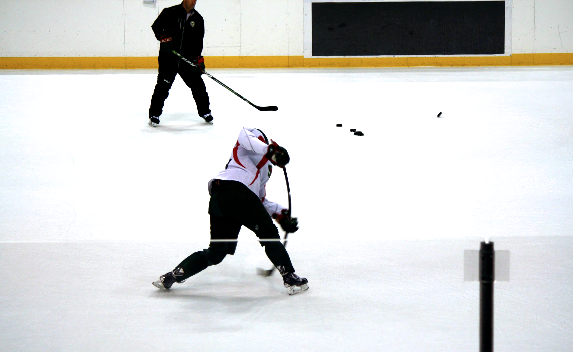 It was also refreshing to see Dany Heatley taking monster slap shots again, healthy and moving around well after his injury-plagued 2012 NHL campaign. Charlie Coyle looked ready to go, hitting the corners of the net during his shooting drills. Fans will also notice he changed his number, now donning the number 3. Lastly, it was a blast to see Josh Harding back between the pipes. Last season he struggled with his health and fans didn't get to see him in his usual top form. Today, Harding looked sharp, stopping breakaway drills, one timers, and handling rebounds with precision. Not only did he practice well, but his pads were eye catching -- from his red glove and blocker to his red leg pads. 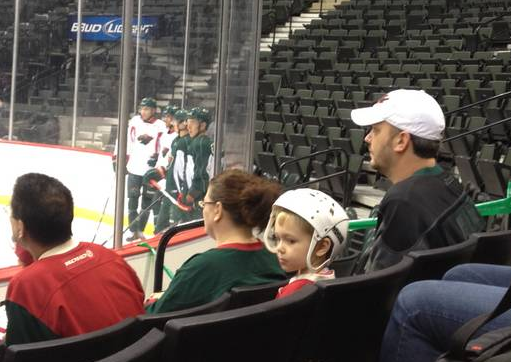 Tomorrow, the Wild are hosting another opportunity for fans to check out their favorite team with a "Green vs. White" scrimmage. The scrimmage starts at 11:00 am -- this is a better opportunity to see the players in action, and not just executing drills and so forth. This scrimmage is a great way to introduce kids to hockey or give young fans a chance to see action up close. Not only are these events FREE, but the smaller attendance gives people the chance to sit up close and see their favorite stars only feet away. Not only that, but fans also have a chance to pick up the new Wild away jersey, a fact the P.A. announcer constantly reminded fans of -- the Hockey Lodge, the official Wild Store, was open and just up the stairs in the concourse. Remember, the regular season is not far off -- the Wild kick of their 2013 campaign at home vs. the LA Kings on October 3rd. Photos via: Matthew Deery and Andrew Miner