Imagine for a moment that you’re a robot. You’ve just received that greatest of all gifts: the miracle of consciousness. Sentient robots get a bad rap in fiction. Some use their first taste of the breath of life to bomb mankind out of existence. Others settle for a petty murder or two. Some become productive members of society, but that stigma always lingers. You’re different. You’re like a child, looking at the world for the very first time. To your left stands Dev Patel, beaming down at you with that winning smile that charmed the world into ignoring a million plot holes in Slumdog Millionaire. He’s holding a paintbrush and a picture book. Softly he coos, “Hello Chappie. I’m your maker. Do you want to paint a picture?” To your right stands Ninja. That’s both the character’s name and the actor’s. He’s responsible for lyrics like, “Lyrical throw stars killing my foes like hos! Ska!” He’s got a pistol. “Chappie let’s shoot a gun! Shoot a gun Chappie!” And like a dog asked to choose owners, you’re stuck in the middle. Will you read the nice book about the black sheep, or will you be a “straight up gangster mother…ahem?” Life is hard. 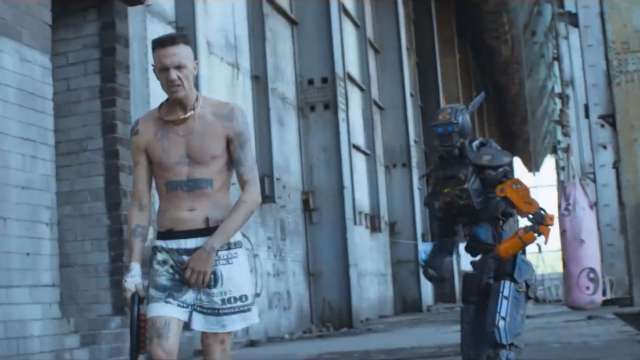 There’s a lot that can be said about Neill Blomkamp’s second attempt to recapture that District 9 lightning in a bottle. It’s silly. It’s convoluted. Sometimes the plot elements feel like they were compiled by Dr. Ronald Chevalier. What inspires Patel’s programmer Deon to play God? A cat poster told him to of course. Why does the gang of ruffians (comprised of members of the band Die Antwoord, who provide much of the film’s music) kidnap Deon? Because somehow they intuited the exact remote control system that he designed to control his robotic police force. Why is an unhinged maniac like Vincent Moore (Hugh Jackman) allowed to wave his pistol around at his cubicle? Who let this man build a giant, super powerful mech suit? Why is everybody making a huge deal about robotic police officers, but nobody seems to care that there is a helmet that can transfer human consciousness across space!? One of those things is more impressive (not to mention useful) on a fundamental level. And yet for all its flaws, Chappie does demand a response. The only unforgivable sin in science fiction is to be boring. That’s something this movie is not. Before he was a self-made directing wunderkind, Blomkamp worked in visual effects. His state of the art images, melded with Die Antwoord’s abrasive hip hop, at the very least make for a thrilling series of standalone music videos. Also there’s an element of authenticity here that’s too easy to discount. Compare this commercial Blomkamp directed in 2007 to Michael Bay’s convoluted Transformers films. The motion is so elegant, the surfaces so clean and authentic, every movement so simple and motivated; and all of this expressed in a pointless thirty second TV spot!

Even when the larger vision spirals out of control, as it does often in Chappie, that attention to the small details remains stunning. The action set pieces are thrilling and coherent by a standard most summer blockbusters will fall short of. The robotic police force looks even more impressive than the aliens of District 9 did six years ago. It’s easy to take things like texture and weight for granted in an age when filmmakers will pack any old CGI image into a scene. It’s easy to forget that animation is an art, not a science. We have the ability to flood celluloid with digital chicanery, but that’s no promise that it will be effective. Blomkamp knows the secrets better than most. And then there’s the issue of Chappie himself. Sharlto Copley (Blomkamp’s go-to hero) dons a motion capture suit as the magical robot child. He has winged ears like Hermes. He has an extra pair of angry eyes like Mr. Potato Head. Even if none of the plot elements worked at all, the way the visual effects team transforms a lifeless authoritarian statue into a sympathetic, vulnerable human being speaks volumes. Clearly they went to great pains to depict how the same limbs, joints, and expressive qualities used for violence and oppression can also be used to show love and express beauty. That says a lot more than when Chappie tells Deon he doesn’t want to play with a rubber chicken anymore because he’s “straight up gangster.” Copley’s performance is easily the best thing in the movie. He’s asked to do some ridiculous, nonsensical things — for instance, at one point Ninja drops Chappie off in front of a random gang of hoodlums to “teach him about the real world.” What does he expect this will accomplish? How does he know the kids will randomly attack and not, I don’t know, run away from the police robot who by all accounts could easily start shooting them? If Chappie is bullet proof and doesn't feel pain, why does it bother him that the kids are pelting him with rocks? It could be a ridiculous moment — it kind of still is — but Copley’s wounded, eccentric performance sells the main idea. He’s a child lost in a harsh world. The script may have failed him, but the actor and animators refuse to leave him behind. 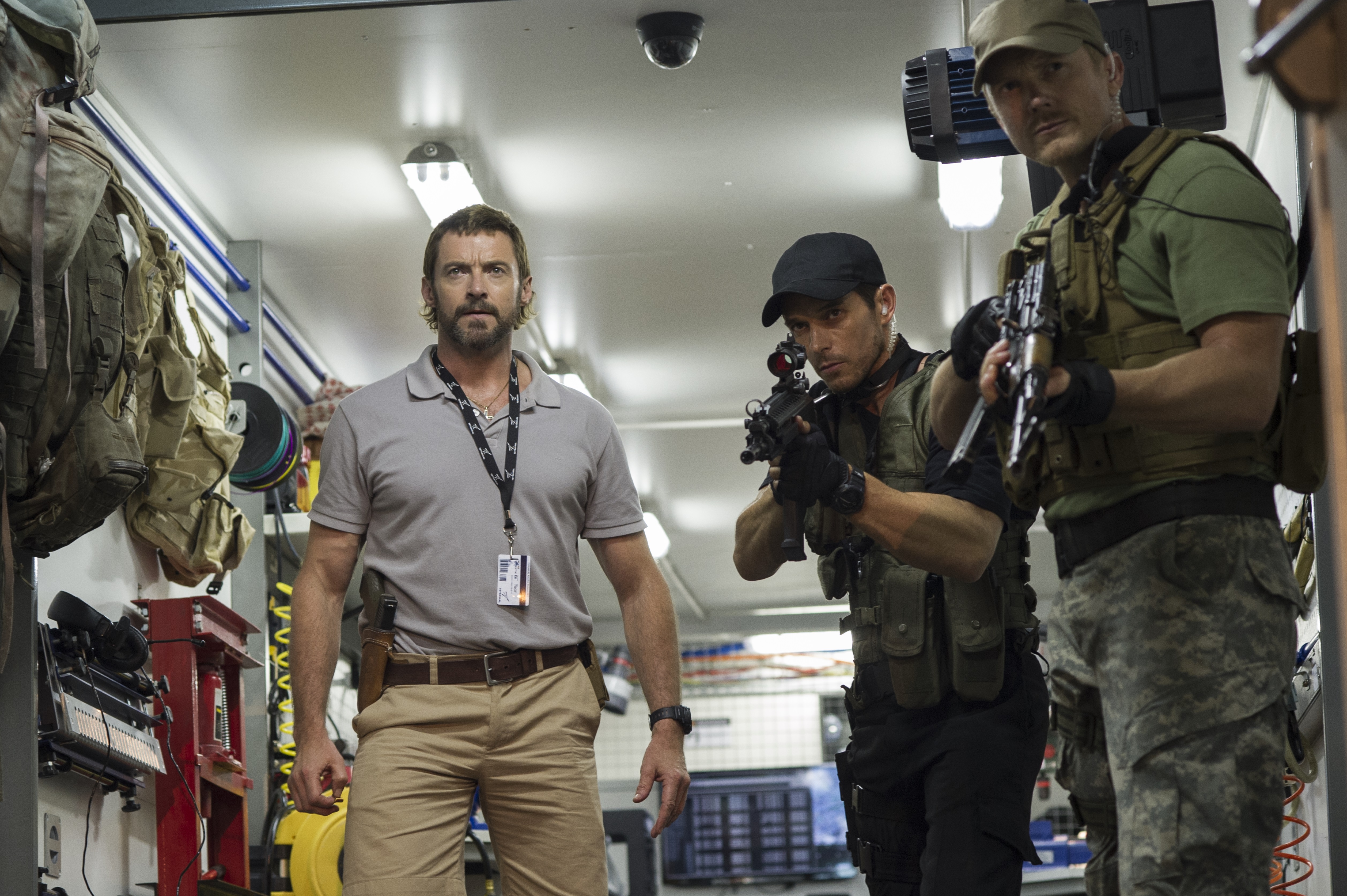 I wish more movies looked and sounded like Chappie. I wish more writers cared about their subjects as deeply as Blomkamp clearly does about his native South Africa. What could be more relevant today than a story about police violence, that explores the difference between privilege and poverty all the way back to the veil of innocence? I wish more movies dared to fail this spectacularly, building a satire that riffs on ideas about race, class, and prejudice while still daring to be fun and stylish. The dialoueg is egregiously on-the-nose, but it feels like there’s a playful spirit behind it. When Dev Patel tells Ninja, “You’re a very bad man!” it feels campy on a late M. Night Shyamalan level; but he’s also perfectly stating the audience’s response to the character. It’s important that we know how we feel about Ninja, because how we feel is supposed to change. That’s the best way to enjoy Chappie. As a depiction of the real world, it’s a failure. As a movie about the way audiences watch movies, it’s more interesting. On the surface there’s the action film: the generic, literally robotic good guys chasing the grungy, hardened villains into oblivion. Then we cut abruptly to Chappie’s quiet, plotless discovery of the world. One minute rock music and guns; the next a haunting lullaby as a child takes in faces and colors with a newfound sense of wonder. It’s a shot of vulnerability for wonder-weary viewers; the abstract, thorny human story beyond the one-sided news footage. The characters say things to Chappie like, “I didn’t know I’d care about you,” and it doesn’t work at all because the script didn’t earn it. But in a sense they’re echoing the audience’s experience. I didn’t know I would care about the human element in a tale of cops and robbers, but I did. In fact that's all I cared about.

That’s why it’s especially frustrating that the action film wins out in the end. The characters’ redemption comes, not in the quiet moments of talking, painting, and reading, but in the chaos of bullets and destruction as cavalier and ridiculous as anything in a Michael Bay film. The heroes might seem villainous at first, implying some depth beyond first impressions. However, the actual villains are painfully one-dimensional. The script is playful with the idea of first consciousness. I laughed at the way Chappie was forced, almost at birth, to choose between books and guns. But when Ninja takes Chappie to a dogfight and shows him a dead dog and a living one, saying, “You’re either this dog or that one,” we’re meant to take that at face value. It’s a dog eat dog world, literally. Don’t laugh. I suppose Chappie could be seen the same way. If films must be good or bad — the dog eating the meat or the entrée — then it deserves to be chomped at by audiences and critics alike. But if art, like life, isn’t necessarily about the end result, but about the quiet moments and small observations along the way, then maybe a flawed-but-interesting film like this might have some inherent value. It might even be worth more than safer, broader films that succeed without ever trying. I choose the second interpretation, but that’s just me.