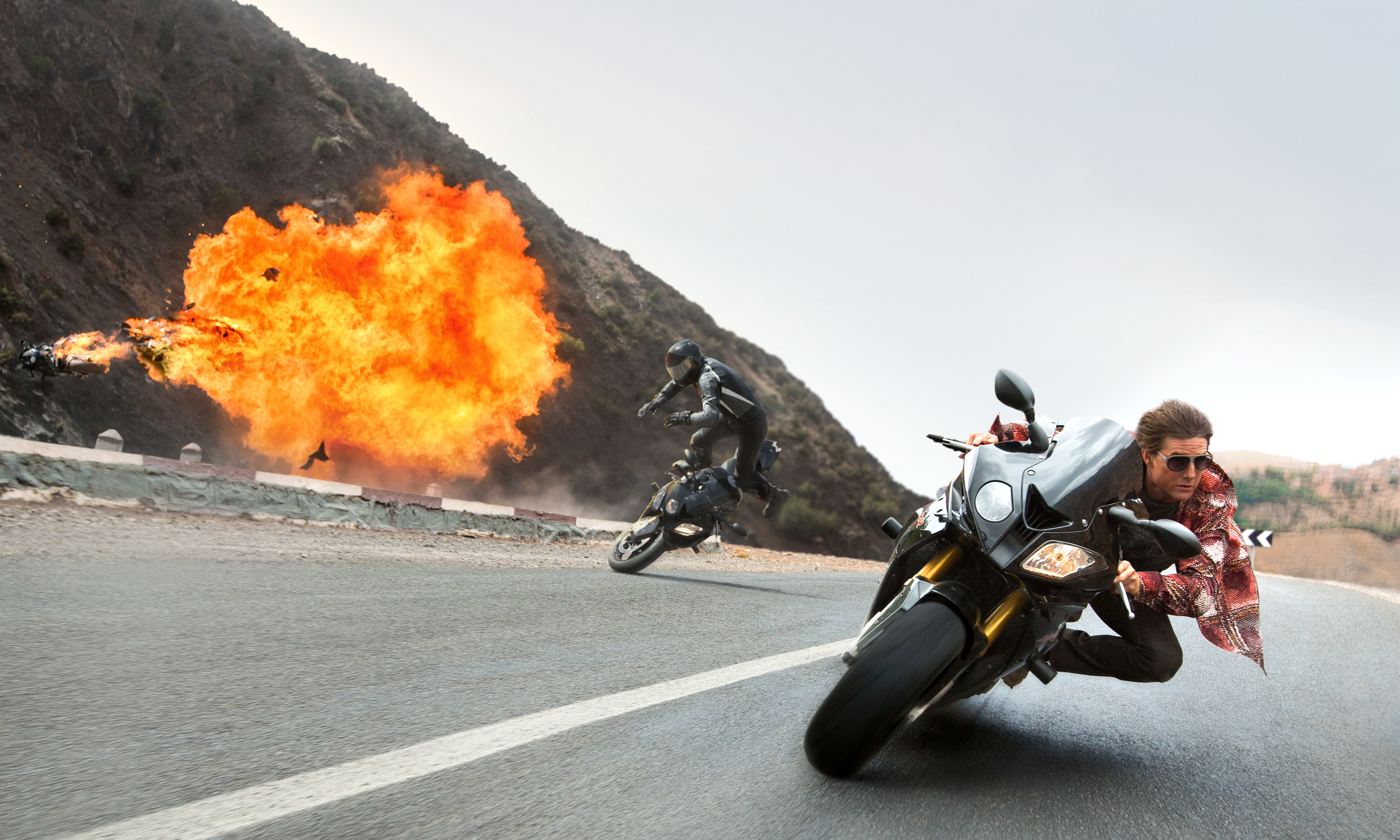 Mission Impossible: Rogue Nation is officially the fifth entry in the Tom Cruise/theme song-starring spy franchise. However, it bears little resemblance to most of its series. The first entry, released nineteen years ago, was directed by Brian De Palma and written by screenwriting hall-of-famer Robert Towne (Chinatown, The Last Detail). It was part of a class of movies that no longer exists: the blockbuster for grownups. It relied on suspense and innuendo over chaos and destruction. It starred a bonafide movie star, was directed by an auteur, and was written by a veteran of old guard golden age Hollywood. It was subtler, more intriguing, but — tellingly — not necessarily better than all the films that would follow. This film also shares almost no connection with John Woo’s follow-up , an insane and misdirected—but embarrassingly watchable — “Hitchcock meets Kung-Fu and… wait what?” mashup which singlehandedly provided the jokes for an entire Austin Powers film. Closer but still nowhere near comparable is J.J. Abrams’ third entry from 2006, which was formally excellent but a little dull in retrospect. At that point Cruise’s star was becoming eclipsed by the planet of Scientology. No, Rogue Nation has only one true predecessor: 2011’s Ghost Protocol, the best entry in the entire series and one of the most fun films released in the last ten years. It was there, under the guidance of director Brad Bird, that this misguided, chameleon series found its place in the cinematic pantheon. That was where Ethan Hunt (and the actor who plays him) reinvented themselves for good. It was the first entry where that pounding, lunatic theme song felt appropriate.  Now we know who Ethan Hunt is. Jason Bourne is the toughest. James Bond is the smoothest. Ethan Hunt is the most fun. He’s the one who will swing from the tallest building in the world or dangle helplessly from an airplane during liftoff. 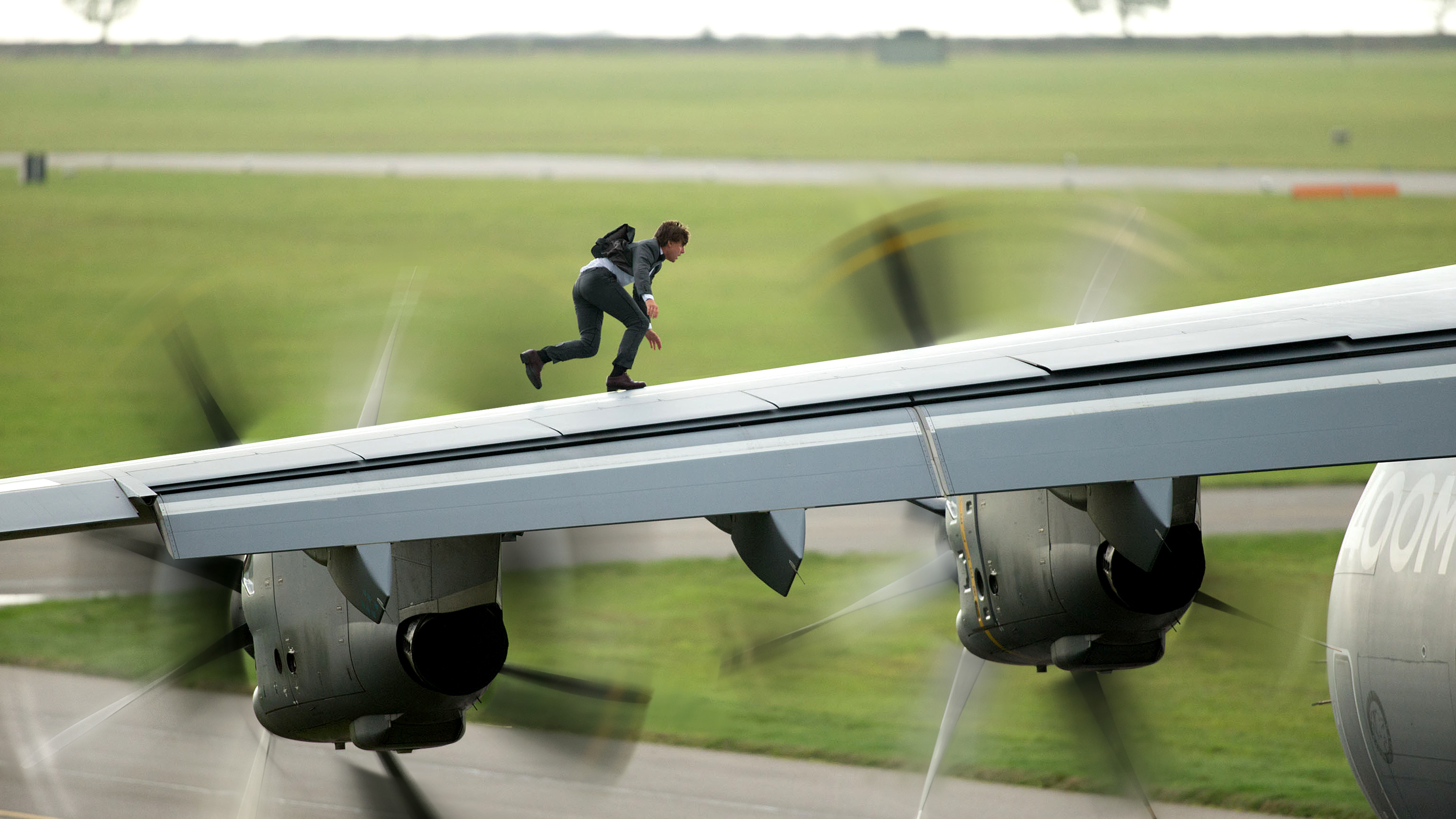 Rogue Nation’s director Christopher McQuarrie cannot quite match Bird’s ability to eek every last bit of joy from an action sequence. He also, sadly, has lost the art of utilizing Simon Pegg, whose talents were fully harnessed in Ghost Protocol for maybe the first time in American film. However, McQuarrie has managed to preserve much of the tension, excitement, and fun. Within ten minutes of the start of the film, the Impossible Mission Force is disbanded, its top agent hunted by CIA head Jack Donaghy. Ethan Hunt goes undercover to learn more about “The Syndicate,” deemed more than once “The Dark IMF” headed by a scary British man with a high voice. From there it’s off: underwater fortresses that need to be infiltrated, motorcycles that need to be chased through exotic locations, double agents whose loyalties need to be sorted out, world leaders who need to be kidnapped. Ghost Protocol was all about the limits of human foresight. Its characters were pushed to the brink of their resources, and Bird let the film dangle in that place where free will and deterministic gravity intersected. Ethan could choose to drive his car off a 100 foot parking ramp, but it was up to chaos to decide if he survived. McQuarrie’s characters are locked in a different kind of impossible struggle. They have to judge other people and make decisions accordingly. Trapped atop a catwalk during an opera, Hunt sees two separate assassins aiming for the same German prime minister. He can only stop one. While the last film was all about humanity vs. physics, like freefalling for two hours, this one lets its characters face basic moral quandaries like word puzzles with life and death stakes. It’s not quite as thrilling, but it’s very engrossing and maybe lingers a bit longer after you leave the theater.

It’s also the perfect vehicle for the talents of its star. Tom Cruise is great at playing desperate and a bit unhinged, but he’s even better when he’s completely innocent. Ultimately the compass for every no-win scenario is Ethan Hunt’s benign optimism. When nations like America and Britain undermine each other through politics and espionage, he sees through the grimy moral ambiguity and can guess at others’ motives because he knows where he stands. Where is that exactly? Some plain between medieval heroism, modern exceptionalism, and the dogmatic belief that every problem has some ideal solution. Everyone else is willing to compromise their beliefs to achieve the greater good. Ethan would rather risk everything to achieve perfection, even when it seems impossible. That’s probably not great international policy, but it does make for thrilling cinema. And that’s also why these last two movies feel like the fulfillment of a long withheld promise. Several times during Rogue Nation Pegg’s Benji Dunn cracks jokes about how the mission in question doesn’t really feel “impossible.” This was the problem suffered by earlier films which approached their subject matter from the writer and director’s own narrow priorities. Ghost Protocol and now Rogue Nation actually take their titles seriously. They are thrilling because they find that place where the best laid plans of their heroes are almost certain to fail. They aren’t really about political subtext or relationships or anything topical or important. They’re not about their characters’ doomed psyches or some continuous, collective universe. They’re about the rush of seeing an insurmountable task and diving into it headfirst. If that sounds like blockbuster apologism, it’s also a mark of purity. These films know what they are, and instead of apologizing for it or trying to make themselves more relevant, the filmmakers just try to make the best version of that thing they can. It’s why a series whose music is more iconic than its main character, whose star was washed up ten years ago, has reascended to become one of the more anticipated film events of the year. And it’s why amid a movie landscape full-to-brimming with explosions, spies, and big budget special effects, people still forget, and can be reminded, what it feels like to be truly thrilled.