Movie Review — Is 'Draft Day' a 1st Round Pick? How Much Do You Love Football? 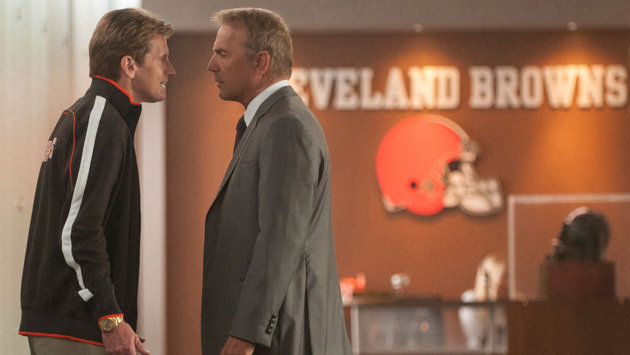 Director Ivan Reitman's Draft Day will never be mistaken for a great film. You'll never hear it mentioned among sports classics like The Natural, Rocky, Hoosiers or Raging Bull. It shouldn't be named among the best football movies, either. Remember the Titans, Friday Night Lights, The Blind Side, Any Given Sunday and Rudy (among others) are all better films tackling the subject of the good old American gridiron. 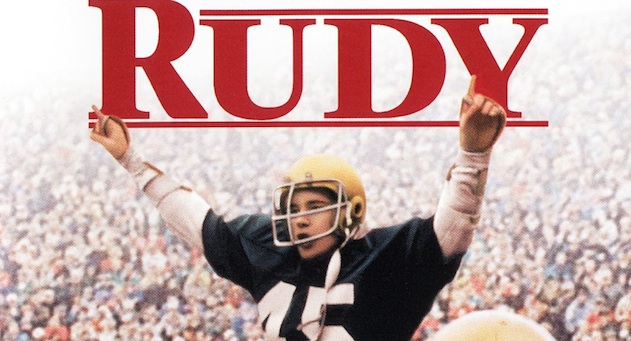 Further, Draft Day doesn't really even belong on the smaller niche list of other "Great Sports Movies in Which Kevin Costner Played a Part." Bull Durham and Field of Dreams are in a whole different league than Draft Day. Perhaps, if I was in a good mood and being generous, I'd rank it along side Tin Cup — which isn't giving it much credit as a cinematic gem. All this to say: Draft Day is simply not a very good movie. And yet, you should still see it if you meet both of the following two simple criteria.

#1 — You are able to suspend your skepticism in regard to the improbable.

Criterion #1 — You Can Suspend Your Disbelief for Two Hours 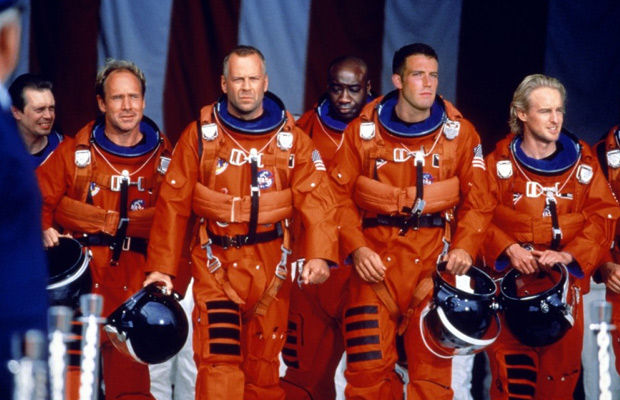 Criterion #1 applies to most, if not nearly all, films -- see the above pictured Armageddon for a salient example. Movies stretch plausibility and use some creative license — and they should. It's generally more entertaining for the viewer when that which occurs on screen provides an escape from the utterly mundane and strictly realistic patterns of regular life. In this sense, sports movies are no different than any other — the narrative must contain some implausible elements in order for it to be noteworthy enough to make a movie about. And in order to enjoy most sports movies, you need to be willing to brush aside that nagging part of you that says, "Nuh uh. That would never happen in real life." Draft Day will have you saying "Nuh uh," at least a couple times (especially if you are the type of person who meets Criterion #2) and you'll need to simply play along with the story if you hope to enjoy the movie as a whole. If you can suspend your skepticism, move on to Criterion #2. If not, Draft Day — and non-documentary films in general — may not be for you.

Criterion #2 is the real key to whether on not you should see Draft Day. You must love NFL football — you must love it deeply. 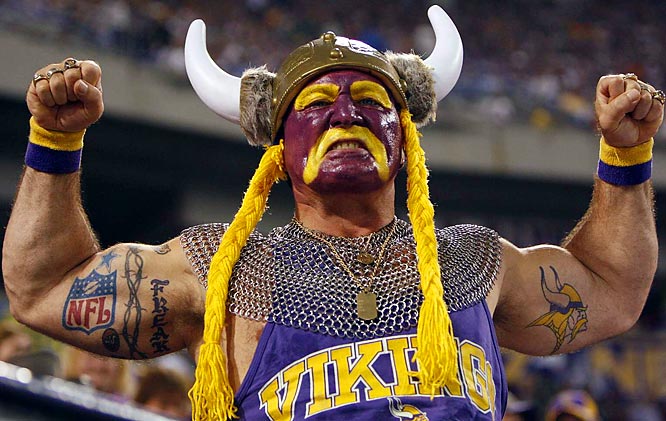 A. I watch the NFL Network during the offseason. B. I play Madden Football in "Owner/Franchise Mode." C. I participate in multiple fantasy football leagues each year. D. I know the meanings of acronyms like YAC, QBR, TFL, PAT & OLB. E. I follow Ed Werder, Adam Schefter and Chris Mortenson on Twitter. F. I can name at least three events in the NFL Combine. G. I have an Adrian Peterson Fathead on my wall. H. I cried when Jared Allen signed with the Bears. 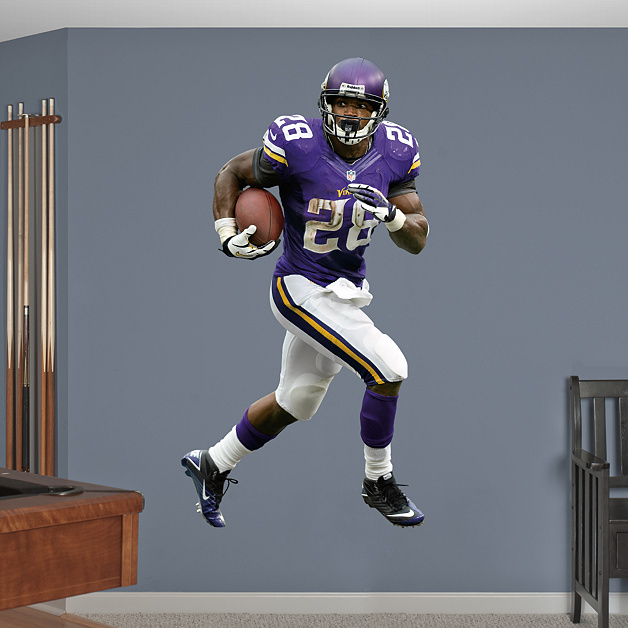 If you cannot honestly say at least four of these statements apply to you, skip Draft Day. It's an uninspired football movie and you'd be better off staying home to watch Frozen again and using the $9.50 to order a pizza. However, if four (or more) of the above statements sound like you, then Draft Day could be right up your alley—as long as you keep Criterion #1 in mind and allow for the Hollywood-ized aspects of the film that require your temporary credulity. 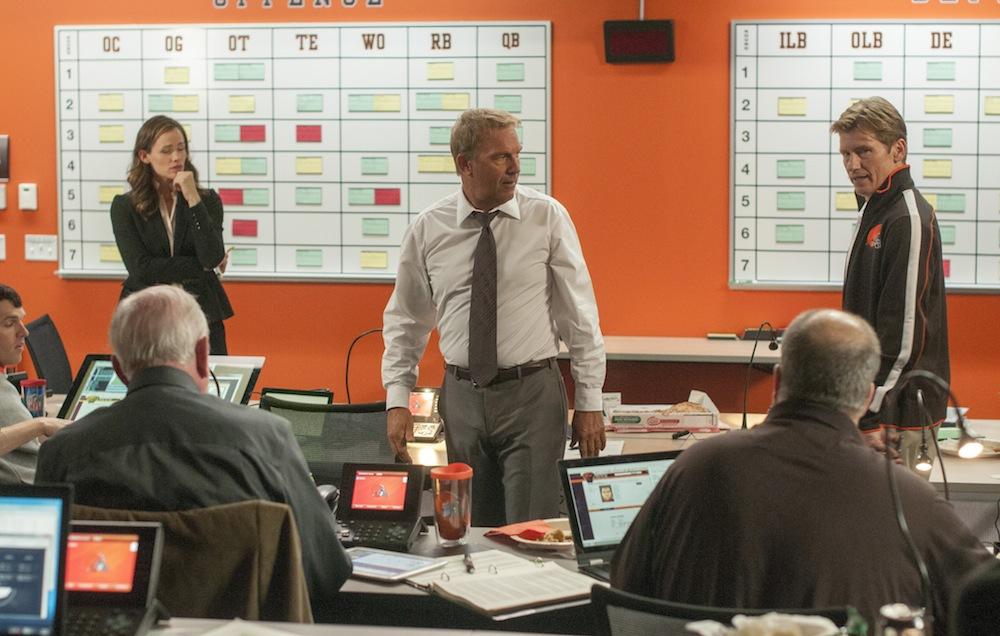 I'll keep the plot summary short: It's draft day in the NFL. Kevin Costner plays the GM for the always-lousy Cleveland Browns, and it's his job to turn the slumping franchise around by making the right decisions when it's his turn to make a pick. Jennifer Garner plays Costner's love interest who also happens to work alongside her beau in the Brown's front office. Denis Leary plays the oft-frustrated Brown's head coach who perpetually butts heads over personnel decisions with his boss (Costner) throughout the movie. Everybody involved is running around while racing the clock — there is literally a 24-esque digital clock that appears in the corner of the screen now and again to remind the audience they should be feeling a sense of urgency — to best prepare the Browns for the draft that evening. 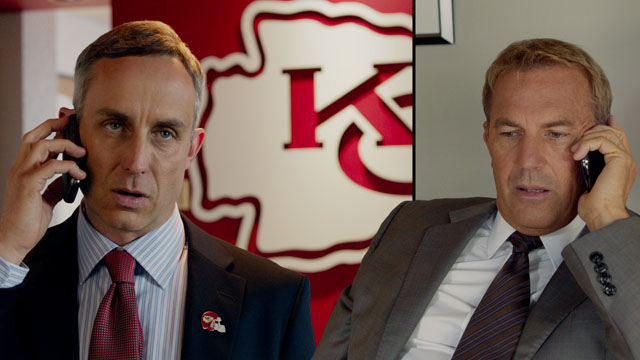 The film is full of trade and free agency talk, front office politics, football footage and terminology, flat acting performances, and a few funny moments as Costner, Garner, Leary and a cameo-filled cast spend their day nearing the decisive draft. 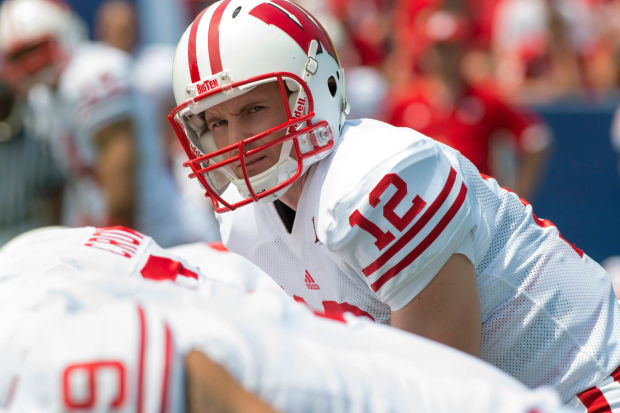 Overall, the film does a solid job incorporating plenty of authentic-looking NFL and college football elements into the mix. The game footage looks like something right out of SportsCenter — ESPN and NFL Network are each shown plenty in the film — and the flyovers of various pro stadiums will leave football fans clambering for NFL opening day kickoff in September. Cameos from NFL Commissioner Roger Goodell, Jim Brown, Bernie Kosar, Chris Berman, et al. are handled fairly well, and will likely add to the film's appeal in the eyes of diehard pro pigskin fans. 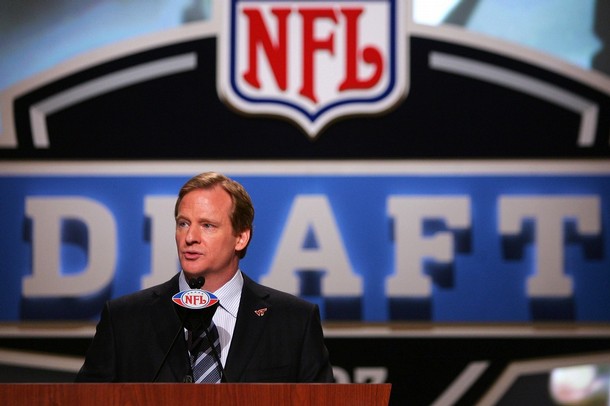 Perhaps the best thing I can say about Draft Day is that it truly feels and looks like a movie about the NFL and the NFL Draft in 2014. Many, many sports movies fail at providing an air of authenticity surrounding the sport they are trying to portray. I give Draft Day credit for being an exception in this area — it looks, feels and sounds like an NFL product from the opening kickoff to the final whistle. 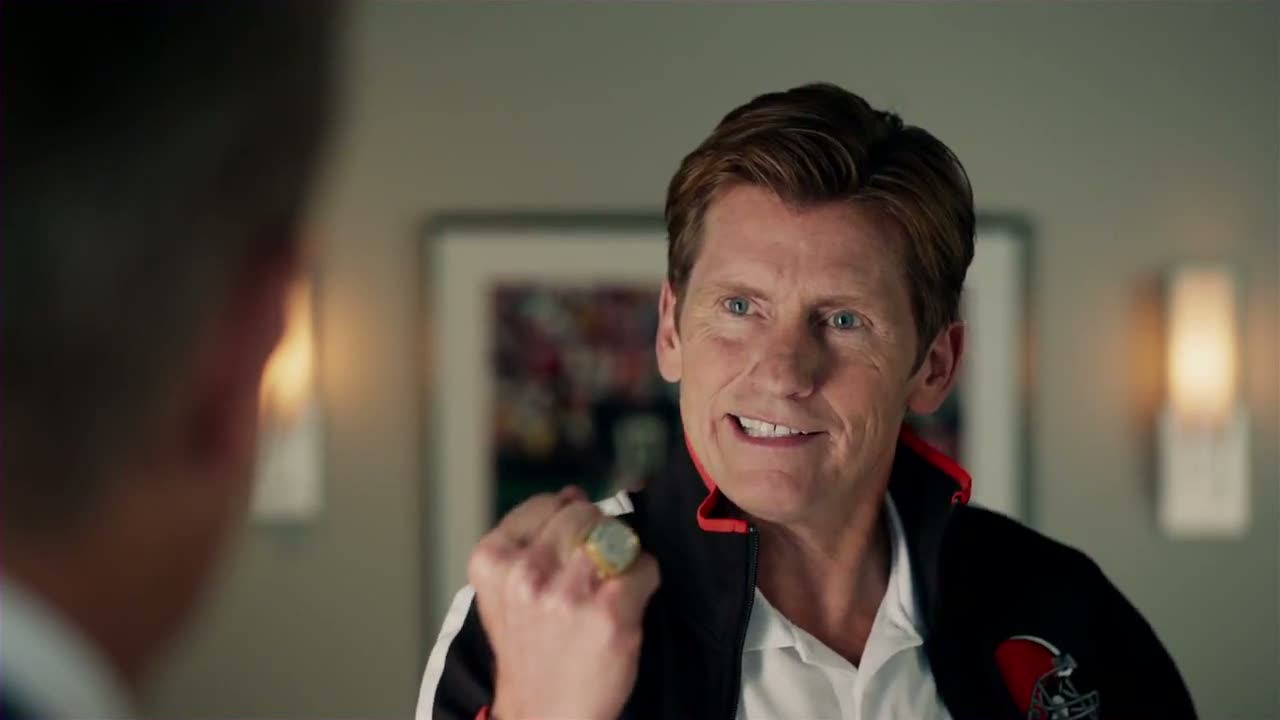 As far as being quality cinema, Draft Day just simply isn't. As far as standing the test of time as a classic sports movie, it simply won't. It seems to want to be Moneyball — portraying the drama and intrigue that exists in the front office of professional sports — but it isn't particularly dramatic or intriguing unless, again, you are already intensely interested in the minutia of the NFL. You might laugh a little, but it's not that funny. You might feel a little suspense, but it's not all that suspenseful. And in sharp contrast to Moneyball, I'll almost guarantee you won't care enough about the poorly developed characters in Draft Day to make you root for them in any way. 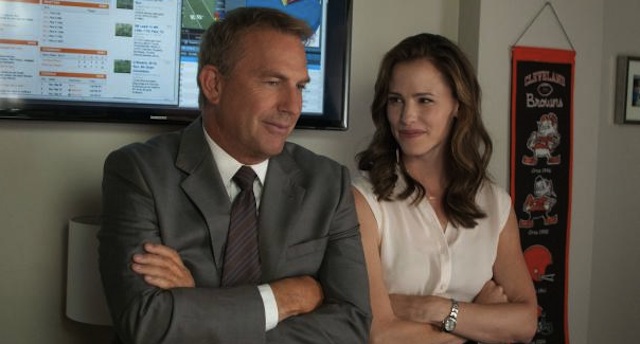 I don't particularly like Kevin Costner as an actor — he's just OK in my book. I've enjoyed some of the films he's been in — JFK, Open Range and Thirteen Days are all in my DVD collection — but I think he generally delivers bland-ish performances that leave me wanting more. Draft Day is another such example — Costner is likable, but not lovable. Jennifer Garner? Meh. The chemistry between her and Costner... well, it doesn't exist. The whole romantic element in the film feels frigid and forced. I'm admittedly biased — similar to my feelings on Costner, I'm lukewarm on Garner's work, and Draft Day was definitely not the film to change my opinion. It's too bad, a more convincing performance from the leading lady might have gone a long way toward the movie's appeal to non-football fans. 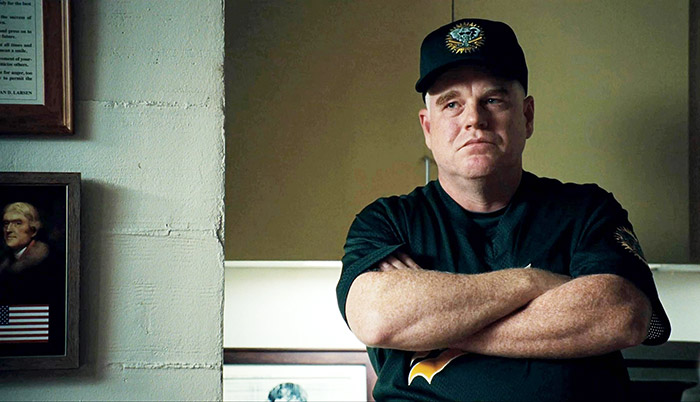 As I watched Denis Leary try and act like a NFL head coach, I found it hard to imagine him as anything other than Denis Leary. I kept thinking back to Philip Seymour Hoffman's hyper-believable transformation into Oakland A's manager Art Howe in Moneyball and wishing Leary could channel (even a sliver of) Hoffman's acting talents to become less like Denis Leary and more like someone even mildly resembling an NFL head coach. 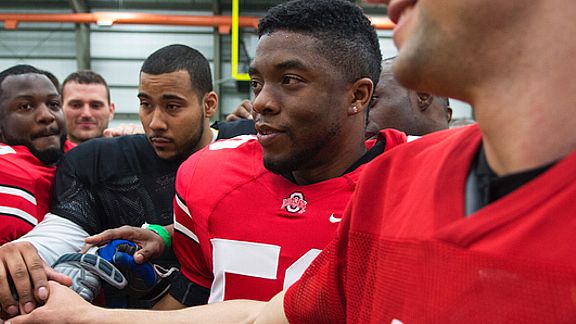 Chadwick Boseman, who also played Jackie Robinson in 42, was a bright spot in the film from an acting perspective — but he is WAY too small to be an NFL linebacker (They should have made him a defensive back). At any rate (and any size), Boseman played his role well and I expect we'll see more good things from him in future films. Also, for those die-hard football fans, keep an eye out for Arian Foster -- he actually acts in the film (I'll leave judgement on his performance up to you) as Ray Jennings, an NFL prospect headed to the draft. In the film he plays the role of a (gasp) running back. His performance is surely less spectacular than his on-field NFL accolades.

Pay attention to Criteria #1 and #2. If you pass those self-tests, give Draft Day a try. It's a fun movie for anyone who is itching for NFL football and can't wait for the upcoming draft in May. If you failed the Criterion #2 test, don't waste your time or money with this film. Watch Bull Durham or Field of Dreams instead if you're craving a Kevin Costner sports flick with a better story and decent acting. Hell, watch Tin Cup. It's better than Draft Day. 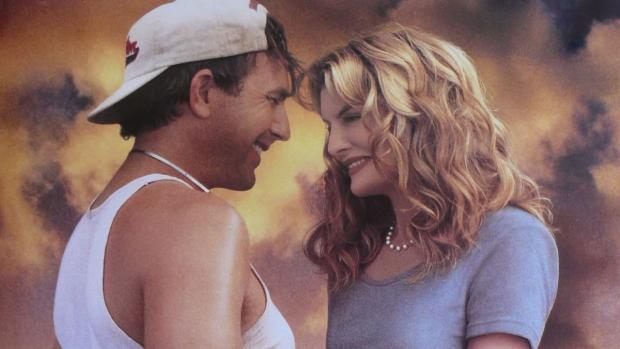 If you failed Criterion #1, you should relax more — just generally. Movies can be fun and convey positive messages, even if they're unrealistic.

I'd rate this film even lower, but I pass Criteria #2 with flying colors and quite enjoyed a football fix with the NFL Draft still almost a month away. Draft Day opens today. Check Minnesota Connected's movie listings for showtimes.   Author's Note: *In full disclosure, since it's a football movie, I also rated it 5.1 (instead of 5) because Dick Butkus is my favorite football player of all-time and wore #51. 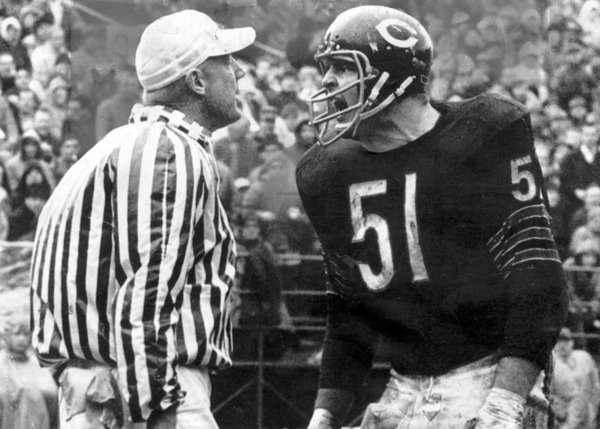