Movie Review -- 'The Hobbit: The Battle of Five Armies' Sputters to a Disappointing Finish

I should start by saying I am a big fan of anything and everything Middle-Earth. Like, a HUGE fan. I’ve read every book by J.R.R. Tolkien, and I’ve been reading The Lord of the Rings at least once a year since I was about 14 years old. The books and movies representing Tolkien’s world have been a central theme in my life for over a decade. So, you can imagine that the anticipation going into the last Hobbit movie, The Hobbit: The Battle of Five Armies, was greater than I can describe in words. This was it. The last time I’d be able to see Middle-Earth brought to life on screen for the first time. Needless to say, I was beside myself and certain this would be the gem of the Hobbit trilogy, full of action, intensity, tension, and, above all else, the magic of The Lord of the Rings Trilogy. But it wasn’t. And it didn’t. While it had many of the correct ingredients to become a classic in the fantasy genre, it just didn’t quite measure up. In my opinion the main problems lie in the script. So much additional drama was added.

Was the original story not entertaining enough?

It seems to me the book has stood fairly well on its own for the last 60 years -- the story didn’t need all the extra embellishments that didn’t happen – and wouldn’t have happened – in Tolkien’s universe. The love story is the pinnacle of this unneeded additional fluff to me. While I love the idea of having a powerful female, butt-kicking character in a story that literally has no female characters, I hate that Tauriel couldn’t exist in this film without being someone’s love interest. Tauriel is an interesting, strong enough character that she could easily have stood on her own -- but for some reason Hollywood’s standards insist that she isn’t a valid character unless a man is infatuated with her. Or in this case, two -- an elf and a dwarf.

The focus of Evangeline Lilly’s Tauriel character then shifts from who she is -- a beautiful elf warrior with fighting skills to rival some of the greatest warriors in Middle-Earth -- to the fact that she is the center of a love triangle. The actress portraying her seemed to have the same feelings I do. Evangeline Lilly herself stated that she agreed to do The Hobbit under the conditions that her character not be part of a love triangle. She had done that during her time on the show Lost, and wanted to play a simple, hardcore, badass character without the unnecessary drama of a love story in an epic that has enough going on and doesn’t need it. However, after all the filming was completed, the studio demanded that a love story be inserted into the film during re-shoots. I can’t seem to get myself to understand why the studio script writers felt this was necessary. Galadriel exists on her own without needing to be validated by a love story, so why can’t Tauriel? As a feminist, I have a serious issue with the way her character was handled. There were a few other things I took issue with that I won’t delve into too much for the sake of spoilers, but there was nothing that got under my skin like the Tauriel-Legolas-Kili love triangle, which began in The Desolation of Smaug. 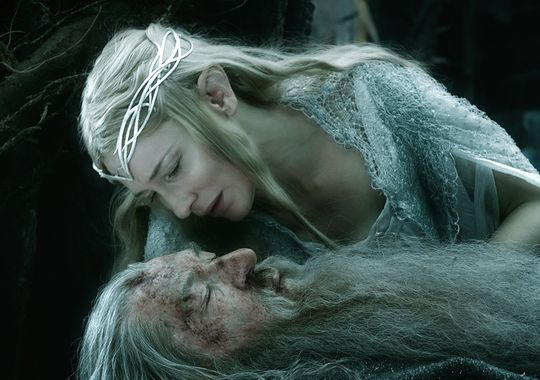 Don’t get me wrong, there were many elements of the film that I thoroughly enjoyed. Middle-Earth’s lore was hinted at and explained much more often in this film than in The Lord of the Rings Trilogy which, for Middle-Earth fanatics like myself, was quite a treat. We got to see Angmar, which was the home of Sauron and his master Morgoth in ancient Middle-Earth. (Maybe spoiler alert -- though all the books came out over 60 years ago.) We got to see Galadriel unleash the power of Nenya, her ring of power, in a standoff against the Dark Lord himself, weakening him and driving him out of Mirkwood and into Mordor while Elrond and Saruman took on all nine spirits of the Nazgul around her. This was probably my favorite part of the film to be honest, getting to see arguably the most powerful beings in all of Middle-Earth gathered in one area and fighting. We don’t get to see much of Galadriel or Elrond showing just how powerful they are in The Lord of the Rings Trilogy, so I love that we were given the privilege of witnessing it in The Hobbit. As always with Peter Jackson films, the scenery and acting was superb. Cate Blanchett (Galadriel) and Richard Armitage (Thorin Oakenshield) particularly stood out to me in this chapter. They both brought to life incredibly complicated and multi-dimensional characters. Ian McKellen’s success in embodying Gandalf goes without saying. He does such an incredible job that I don’t think anyone will ever be able to play Gandalf again or measure up to the great Sir Ian. And as always, New Zealand is the epitome of Middle-Earth in our world. The landscapes and beauty of the country perfectly embody every one of the unique locations in Middle-Earth (though much of this film was shot on sound stages with green screen backdrops), from The Shire, to Erebor, to Mirkwood, and even all the way to Angmar. The special effects were also quite good -- though at times they seemed to go a little overboard with the monsters and orcs. Smaug is an absolute marvel to witness. He looks completely realistic in his movements, his texture, and his ability to spew flame. Though there were a few things I wasn’t exactly keen on in this film, the ending helped to make up for it. Blending flawlessly into the beginning of The Fellowship of the Ring, this film ended happily in the Shire with Bilbo and Gandalf meeting just before the hobbit's birthday celebration. I can’t deny that I shed a few tears as the last Middle-Earth movie to hit the big screen came to a close, but I’m excited for all the films to be on DVD now and to have the opportunity to watch them in order as the stories go, the full The Hobbit Trilogy followed by the full The Lord of the Rings Trilogy. I’m a nerd like that.