Movie Review – ‘Two Days, One Night,’ No Excuse for Missing Out

If I had to guess, I’d say more than half of Two Days, One Night, the 2014 Cannes entry from French auteurs Jean-Pierre and Luc Dardenne (The Kid With the Bike), takes place in front of doors. The film’s hero, Sandra (Marion Cotillard) stands at these doors, knocks, waits, composes herself, explains her situation, then braces for the response from the person staring down at her from half inside the doorway. When it’s over she moves onto the next one. No she’s not a Jehovah’s Witness. She has to clarify that at least once. Sandra has been laid off from work. Her husband’s income is not enough to keep the house, pay the bills, and take care of their two children. Her only hope is an ultimatum from her boss: she can keep her job if she convinces a majority of her coworkers to give up their 1000 Euro (roughly $1100 US) bonus. This same deal was offered weeks earlier, and she lost with a vote of 14-2. However, her husband and friends believe (and she reluctantly agrees) that maybe if she looks these people in the eyes the weekend before the vote, she can sway their judgment. Some of her coworkers try to hide from her or scare her away with their judgmental glares. Others are brought to tears by the fact that she even had to ask. Sandra, who is recovering from a long battle with depression, must gather herself before each confrontation, afraid that she’ll lose her nerve or burst into tears. The Dardennes capture her struggle in long, handheld takes that refuse to look away. She repeats the same story about her biased supervisor and her boss’s ultimatum almost a dozen times. Almost a dozen times she hears the reply, “How many others agreed to give up their bonus?” It’s a visceral experience for both her and the viewer. Like most people, I’m programmed to respond violently to social queues and back away when it seems like an offense is about to be committed. Anyone who has watched an episode of The Office knows the breach of these norms on screen can be more uncomfortable than the most gruesome violence. But why is that? Why is part of me so convinced that people will be so terrifyingly unreasonable, where I’d like to think I’d be understanding? I found myself begging to look away every time Sandra made her perfectly reasonable request. I know she needs the money. I know most of her coworkers can afford to give it to her; that it wasn’t her fault she was put in this situation. Yet I just want her to stop. I want the camera to cut away. I want anything but to remain in the judgment and desperation of this moment. The only explanation is that sometimes I see other human beings as threats to be avoided and neutralized; that I ascribe to humanity some “otherness” that comes from a place of solipsism and distance rather than an attempt at empathy. It’s a selfish paranoia at the heart of every conspiracy theory from the Truther movement to parents who refuse to vaccinate their kids. 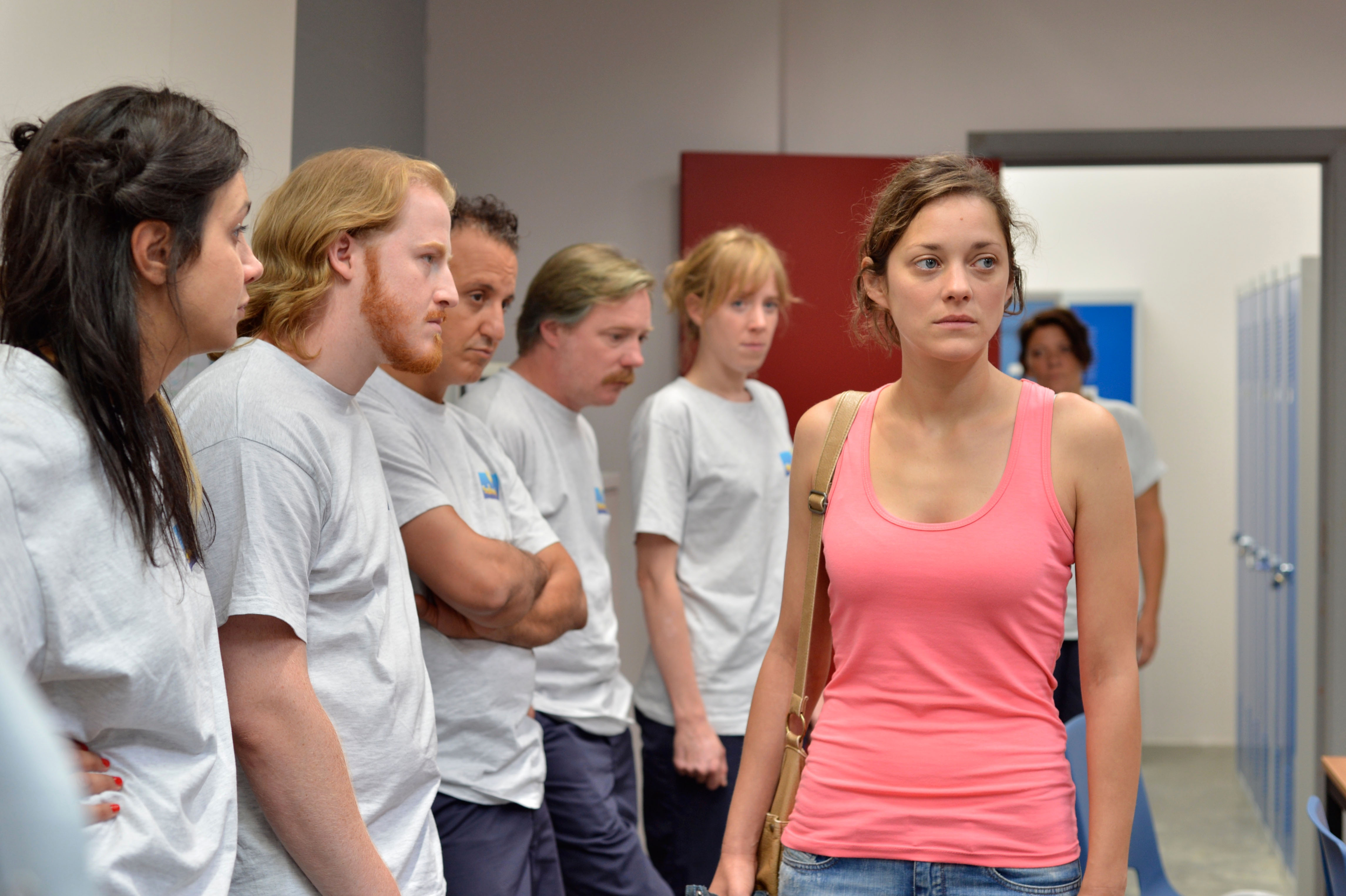 That alienation is also a major symptom of depression. Cotillard’s performance rarely explodes into the kind of violent desperation or cathartic release that we expect in films of this nature. Sandra’s first goal in conflict is to escape, popping Xanax pills like tic tacs, taking naps throughout the day, and occasionally withdrawing to shake and cry out of the view of her family and the people whose eyes are boring into her soul. As someone who has struggled with depression my whole life, I know that the last thing I want when I’m low is to have to walk around and beg others for validation I’m not even sure I deserve. These thankless confrontations are the perfect vision of the exhausting, anxious grind that depression makes of life. One particularly fascinating element of the Dardennes’ vision is their use of light. Most of the time movies portray depression with monochrome filters or harsh shadows. Here Sandra’s malaise is represented through the glare of a bright noonday sun and a wide assortment of colors. As a result, nothing in this world feels unique or remarkable at all. There are no highlights or patterns to draw our attention, no shadows to spark our curiosity. Every detail has equal prominence and therefore nothing matters. The absence of a score compounds this emptiness. When night finally does come, streetlights call through the darkness, and music plays on the radio, it’s the return of a meaningful cinematic order for both hero and audience. There may only be one night to the two days, but it’s still necessary to feel its rejuvenating effects. The film wisely never hyperbolizes Sandra’s problems. The symptoms of her depression are depicted internally. Her husband is loving and understanding. Her children are healthy and sweet. She has several friends who care about her. Her family needs money but they still eat out, their house is well-decorated, and their car works fine. There’s always a temptation to turn misery into a burlesque. Filmmakers are afraid that someone in the audience may not be convinced by the character’s suffering unless they suffer enough. Cue Ron Howard stealing the hero’s kids, turning off their power, and throwing them into a pitiful rage through the streets in the pouring rain. This attitude encourages the exact kind of unreasonable judgments of which Sandra’s coworkers are guilty. Depression rarely makes logical sense. For someone who is depressed, the lie that things aren’t really that bad is often exactly what prevents them from getting help. And most financial troubles are large enough that the cost of air conditioning doesn’t matter. Allowing audiences to ignore these truths in favor of some noble myths prevents the dialog from having any application to real life. Because it is so quiet, because it is so intimately observed, because it lacks clichés or exaggerations, Two Days, One Night might feel underwhelming. It might even seem simple or a touch obvious. Cotillard is a favorite for Best Actress at this year’s Oscars, but she doesn’t give the kind of showy performance that usually draws voter attention. The ending is somewhat pat, and after ninety minutes of dialog and setup the conclusion plays more like a gentle adjustment than the punch in the face I was hoping for. But sometimes the big punch in the face is the problem. Sometimes the truth is more of a gentle tap. The Dardennes’ have focused their attention on the experience of desperation and melancholia. They put the audience in situations where we want to disconnect because the outside world is too overbearing, not in the usual cinematic way but in the way that someone might feel if they had to wake up with these problems day in and day out. 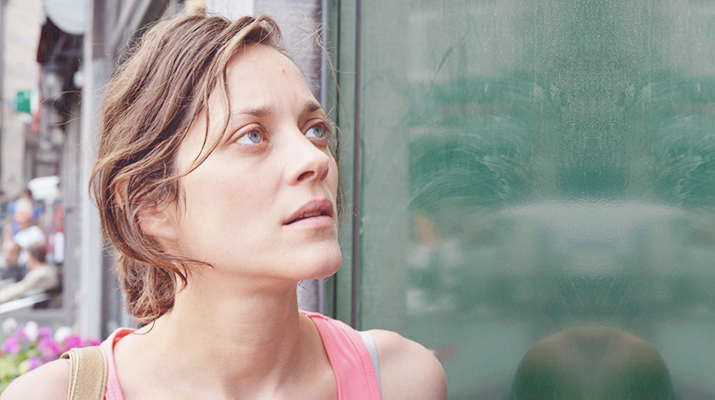 The tone here is stark naturalism, but I couldn’t help but compare it to one of the dreamlike fantasies from Franz Kafka’s The Trial. One famous passage in that book tells the story of a man who waits in front a guarded gate seeking justice. The guard tells him he’s welcome to try to enter but that he will likely be stopped. The man sits and waits, attempting bribery and reason to convince the guard to say he could enter. The guard never relents and the man grows old and deaf sitting in front of the gate. When it’s finally too late, he gathers the courage to ask the question that has gnawed on his mind. “Every man strives to attain the law. How is it then that in all these years no one else has come here seeking admittance?” The guard yells in his ear, “Nobody else but you could ever have obtained admittance. Nobody but you could enter this door! This door was intended only for you! And now I’m going to close it!” One reason confronting our neighbor is so terrifying is that we create them in our own image. If I’m too tired to listen to someone else’s problems, why should I expect that person to behave any differently? In this way I am complicit in the creation of my own world. I decide how much someone cares for their neighbor. I decide how much someone is willing to sacrifice. And people will watch, and their idea of someone will change based on what I do. The world depicted here is awash with uncertain, beleaguered people waiting for permission from each other to ask and do the same things. Here’s a film dedicated to acknowledging the problems people face in as honest a light as possible, yet it’s also presumptuous enough to claim something can be done to fix them. The door might be guarded and entry might feel unlikely, but that’s no reason we shouldn’t knock anyway.