Movie Review - 'You're Next' is Scary, Funny and Clever

Indie director Adam Wingard’s You’re Next dishes up a twist on the routine killer-in-the-house horror film. It not only provides a heavy dose of gory scenes, but also gives the audience the comic relief it needs. Currently, that seems to be the trend in horror flicks, to somehow make the film even more horrifying by confusing the emotions between the audience and the characters.

Wingard also brings forward some fresh faces to this film such as Sharni Vinson and Nicholas Tucci. It opens with a husband and wife spending their 35 year anniversary at their "work-in-progress" mansion. They also invite their four adult children and their significant others to the celebration. After everyone arrives, we learn the family isn’t as close as you would think. Two of the three brothers are in a spat practically the entire time, the mother is emotionally ill, and the father has come into a large investment of money that is going towards the housing project. 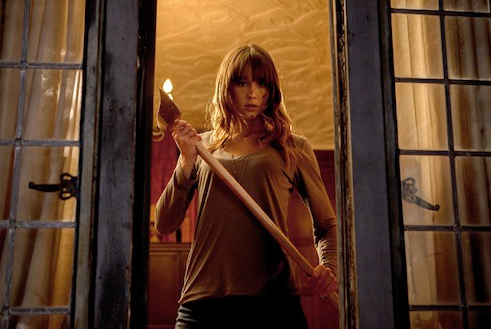 Things escalate fairly quickly with chaos and terror as a band of masked strangers enter their domain. But as the family starts to wonder who and why, they come to realize this may not be random and may be more personal than any of them know. When the family attempts to escape to seek help, the impostors are always one step ahead. Vinson stands out as it becomes apparent that she may have a secret of her own as she strangely remains calm through these unthinkable events. If you are a fan of Clue, you may pick up on some similarities.

Reviews of this film are fairly decent for a mainstream horror movie. It stands on its own for new ideas that Wingard brought to the horror genre. Sites such as IMDB.com give the film a solid 7 out of 10 and 70% of critics and users say they enjoyed it on Rotten Tomatoes. The film in my personal retrospect gives the female lead more of a chance to prove herself rather than making her a helpless victim that runs up the stairs screaming or the typical partially nude bathroom scene. From what I saw from behind my shielded hands, You're Next is scary, funny and clever, three strong attributes that make a movie like this a must see.