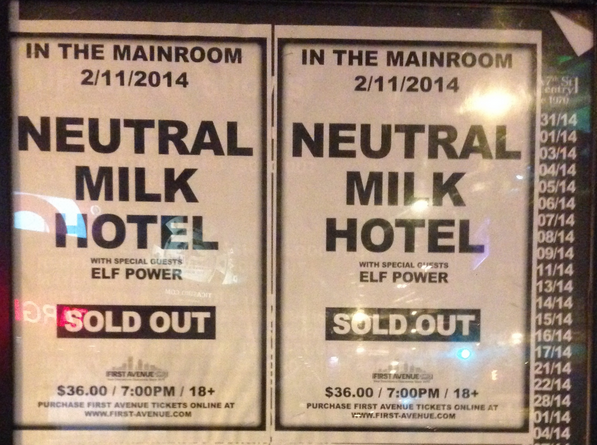 There are two camps when it comes to Neutral Milk Hotel: those who are deeply in love with the band and those who have never heard of the band (I'm part of the latter). Neutral Milk Hotel is a band from the mid to late nineties that released two albums -- then they disappeared for the next 16 years until late 2013 when they announced a string of tour dates which ultimately brought them to do two sold out nights at First Avenue. Jeff Mangum, the band's singer, songwriter, and guitarist had essentially packed it all in shortly after the release of the final album in 1998, becoming somewhat of a recluse, which he dressed the part perfectly last Tuesday night. When the tour was announced the response was almost like someone had risen from the dead. The fans, and I'm not sure if fans are even the right term for those who are so dedicated to a band that made such a small, yet deep impact on the music scene so long ago, were salivating for tickets. I decided I wanted to see what all the excitement was about. Truth be told, I gave the albums a listen, and came to the conclusion it's not my scene. I'm not saying it's bad, not at all -- it's just not for me. However, perhaps seeing them live would give me a different perspective and clue me in on how a band can reach cult-like status with such a small catalog of music. The sold out crowd was very emotional, polite, and incredibly happy. It was as if a very dear friend was back in town for a couple nights and everyone wanted to see him, even if it was for just a couple hours. Once the show started, the electricity in the crowd was contagious, with the entire venue singing along to every song -- it was quite the sight to see. Even more unbelievable was the lack of cellphones, and by lack, I mean none -- I didn't see one cell phone taking pictures or video. It was almost like it was 1998 again. While I did really enjoy the music itself, I wasn't into Mangum's voice, especially on the solo songs. It was a little grating for my taste, but the multiple layers of sound from the band were elegantly placed and I was especially fond of the musical saw, which was a distinctive part of a handful of songs. It began to become obvious to me  how this music would seem out of place in 1998. There wasn't much, if anything like this back then, but seems like a much better fit in today's musical landscape. Perhaps it was a long shot to convert me into a doting fan, but it did give me a new appreciation for Neutral Milk Hotel. The crowd seemed way more excited about the fact they were seeing a band thought to be long gone than they were to actually seeing the band itself. It was a unique experience and it would be really interesting to see what Mangum and company could create these days, but that just might tarnish the blemish free status they've enjoyed for the last 20 years.   Photo by: PJ Mudd