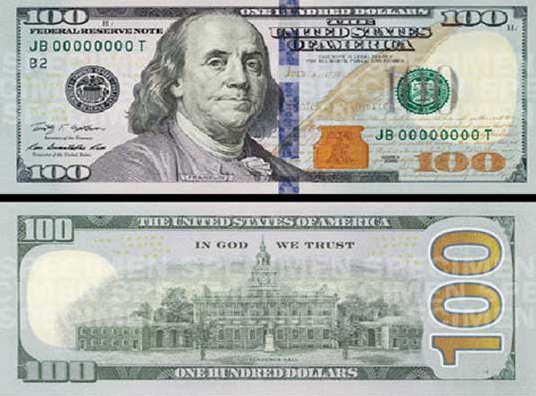 The government is shut down, but that doesn't mean The Federal Reserve stops printing money -- with the way our government spends, The Federal Reserve never stops printing money. Despite the lull in government activity, the Fed has been busy with their rollout of the new $100 bill. The new note, which reportedly took ten years to develop, is finally ready for circulation and will hit banks on Tuesday. The new bill is full of tricks and pitfalls to stymy counterfeiters -- even with the new advances, I'm reasonably certain it won't be long before the best con artists figure out how to replicate this bill. This is the first time since 1996 that the $100 bill has been redesigned -- but as the photo shows, the note will still feature Ben Franklin on the front and Philadelphia's Independence Hall on the back. So yes, in case you are wondering, it is still "All about the Benjamins." Though $100 bills rarely grace my billfold, I am excited for the opportunity to check it out. The bill has many new features, including a disappearing Liberty Bell and a blue 'security ribbon' that has reflective images that move opposite to the way the bill is being tilted. "The 3-D security ribbon is magic. It is made up of hundreds of thousands of micro-lenses in each note," said Larry Felix, the director of the Bureau of Engraving and Printing. "This is the most complex note the United States has ever produced." The Federal Reserve is rolling out $3.5 billion in new bills on Tuesday. For all you high rollers out there, expect to see your money change as soon as tomorrow. One thing is for sure, I'm going to have to shut down my now dated counterfeit printing press (just kidding, please call off the SWAT team) because the $100 bills now have a new look. I'll just have to wait for the off chance that one of these new bills falls into my possession. Photo via: Google