Nostalgia Video Gaming - 'Heroes of Might and Magic' Series

It is always interesting to find out the stories behind video games. Video games have gone through many changes in their few decades of existence. Arcades, PCs, Xboxes, all these platforms have altered through the generations, and the games have had to change with it. But the series I'm looking at comes in at an even more interesting angle. In the 1980's, New World Computing had begun a long series of role-playing games known as Might and Magic, featuring many heroes traveling about in a fantasy world. But then in 1990 they published another game: King's Bounty. It was a very unique and interesting turn-based strategy game which involved a lot of adventuring, troop collecting, and artifact hunting. In 1995, New World Computing decided to put these two games together.

Heroes of Might and Magic: A Strategic Quest (MS-DOS 1995)

A very interesting game indeed, Heroes of Might and Magic took place in the fantasy world of Might and Magic, but focused not on a Dungeons & Dragons style party of heroes. Instead this game focuses on heroes of certain factions that build towns, gather armies, and go out conquering and adventuring with those armies. There were four factions in this game, each divided by the type of hero: Knight, Barbarian, Sorceress, and Warlock. Each faction was divided up as a 'might' faction (the Knight and Barbarian) or a 'magic' faction (Sorceress and Warlock). For every type of hero there was a town specific to them, and those towns produced specific units. The Knight used medieval human troops such as peasants, pikemen, archers, and cavaliers. The Barbarian favored more brutish monsters: orcs, wolves, cyclopses, and trolls. The magical heroes had much more mythical creatures, with the Sorceress favoring woodland types (sprites, elves, dwarves, unicorns) and the Warlock favoring monstrosities (Minotaurs, Griffins, Hydras, and the only Dragons in the game). There were are few faction-less 'neutral' creatures too. 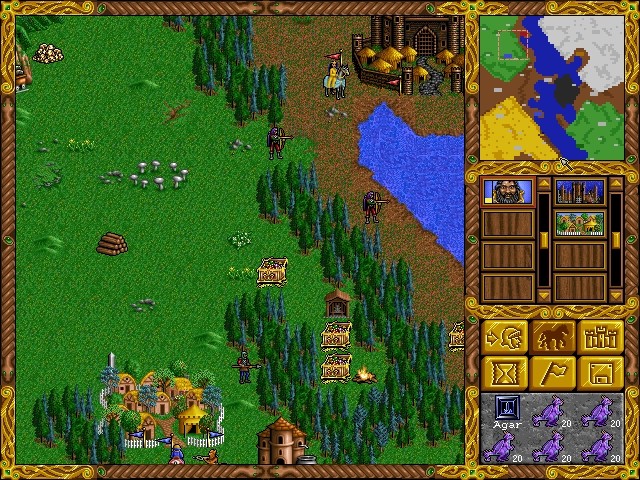 How the game works is very interesting too. Each player gets a turn, on each turn every town the hero owns can construct one building, and every hero belonging to the player can move a certain distance. The hero can find piles of resources needed to buy units and build in the town, artifacts to help the hero's stats, or monsters, enemy heroes, or towns to confront in battle. Battle then puts another level of turn-based-ness into play. A gridded field appears, with each side's units appearing. Each unit gets a turn (which is taken in an order based on the creature's speed) and once all creatures have had a turn, a new 'round' begins. Heroes of Might and Magic: A Strategic Quest caught on quickly, and sequels were warranted. The best way I've found to get a hold of anything in the Might and Magic universe is through the website www.gog.com, which provides a cheap and DRM-free download of many good, old titles. Heroes of Might and Magic 1-5 can be found there. 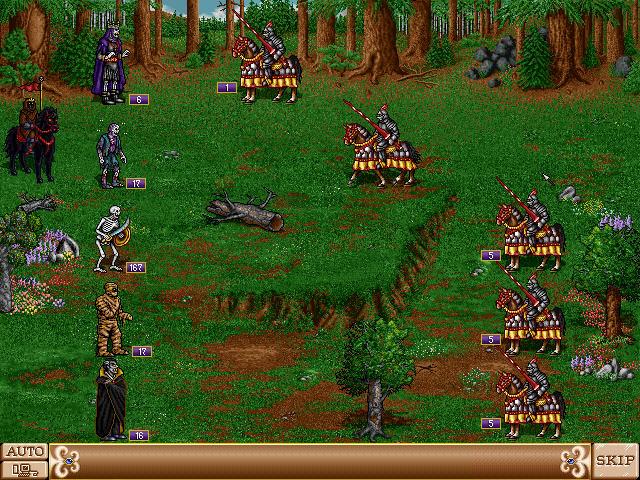 New World Computing pushed this sequel out fast, seemingly reusing most of the sprites and graphic from the original, but adding and changing enough to make it the next step in the evolution of this series. Heroes of Might and Magic II, stepped the story up a bit (from the bare-bones plot of the original) and added two new magic factions: the Wizard and the Necromancer. While not the first time the undead had stepped into this world, it was the first time they were their own faction. This, among other things would leave a lasting precedent on the series, one of the most important being unit upgrades. Not all units could be upgraded, but each faction had its capabilities. The Knight could turn his paladins into crusaders, and the Warlock could change the color of his dragons (Twice! Black Dragons were scary!). Gaining an expansion pack (which mostly changed music and fixed bugs), Heroes of Might and Magic II was possibly even more enjoyed than its predecessor, and paved the way for the most defining sequel. 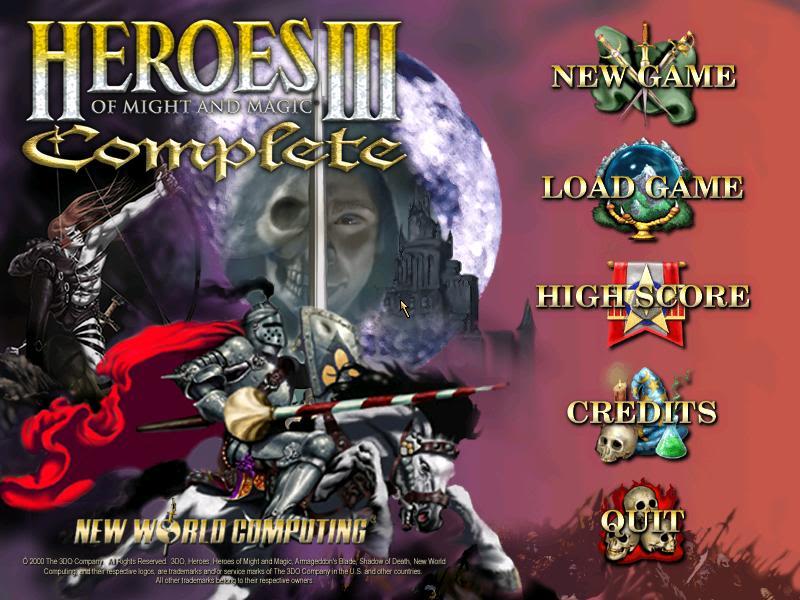 Heroes of Might and Magic III was, and is, probably the favorite for most fans of the series. It left a much greater mark on the games to come, and featured a great shift in setting and storytelling. Heroes of Might and Magic II featured two campaigns: good and evil. This time there are seven campaigns, which weave in and out of each other and showcase all nine factions; good, evil, or neutral. The major shift I had mentioned came a lot from these new factions. First off, each faction was no longer based on the individual hero, but on the town. Each faction's town received a name (Castle, Rampart, Dungeon, Stronghold, Necropolis, etc.) and each had its own might and magic hero. The Knight took over the Castle town, and left the spellcasting to his counterpart, the Cleric. The greatest shift though was in the sudden definition of good and evil in the factions themselves. This was highlighted by the addition of a demon faction (the Inferno town) and the angel appearing as a unit in the Castle town's army. Of course there were also three neutral factions, which are not to be confused with neutral creatures (ones that don't have a town). 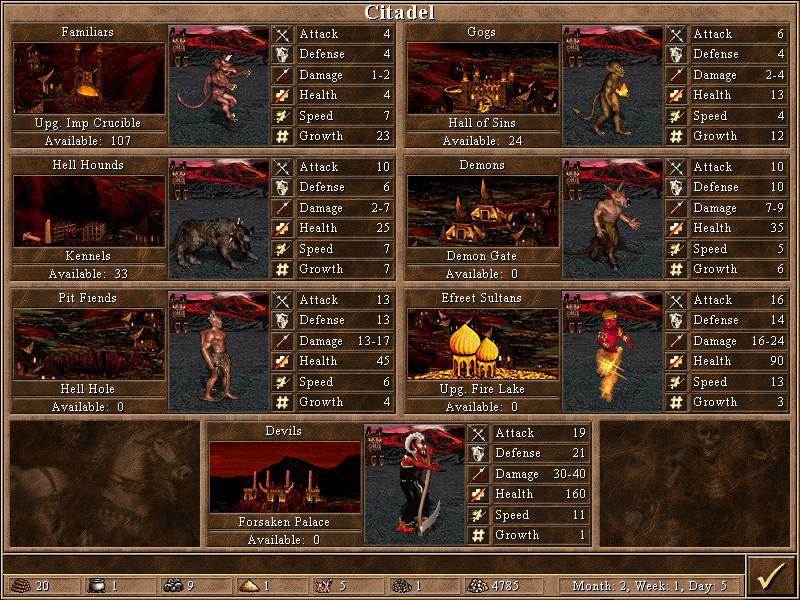 Continuing on a path started back in the last game, Heroes of Might and Magic III kept the undead in the game, and further expanded the unit upgrades. Now, any creature belonging to a town had one upgrade. Wood Elves became Grand Elves, Minotaurs became Minotaur Kings, and so on. No 'triple upgrades' this time, but every creature at least had one. Adventuring was also expanded by looking back to King's Bounty. A grail was added to some maps, which could only be found by completing the puzzle map and digging it up. This would allow the construction of a mega-building in each town that improved gold and creature production, as well as another special effect for unique to each faction. Of all the Heroes of Might and Magic games, this is the one to check out. It is still great fun today, and left a definite and noticeable impact on its fanbase, as well as its sequels. It has two expansion packs -- which would lead to many more tangents if I stopped to discuss them here. 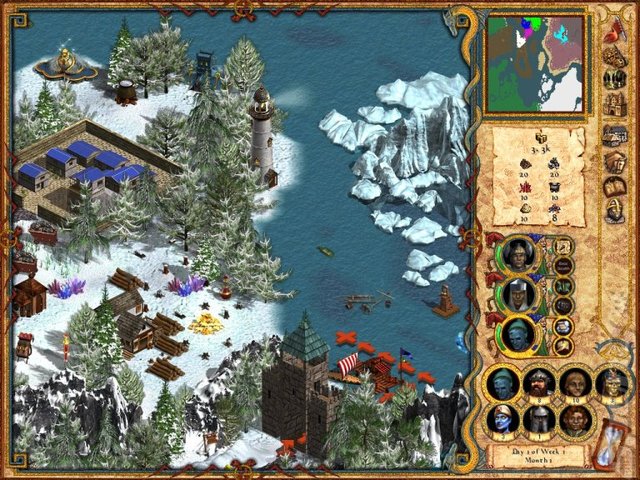 This one is... unique. Heroes of Might and Magic IV was New World Computing's last game in this series, and they used it to experiment with the style of the game. The number of factions dropped down to six (even after two expansion packs) and the fierce defining of good and evil was done away with, in favor of each faction representing a specific paradigm: Life, Death, Order, Chaos, Nature, and Might. But the changes don't stop there. Normally there were about seven units to each faction. Heroes of Might and Magic IV brought that up to eight, but you could only ever recruit five from one town. Why? Well, instead of having a set roster of monsters, in this game there are two options for each level of monster, and levels 2-4 block out the one not chosen. Instead of having both Minotaurs and Medusas, you now get either or. 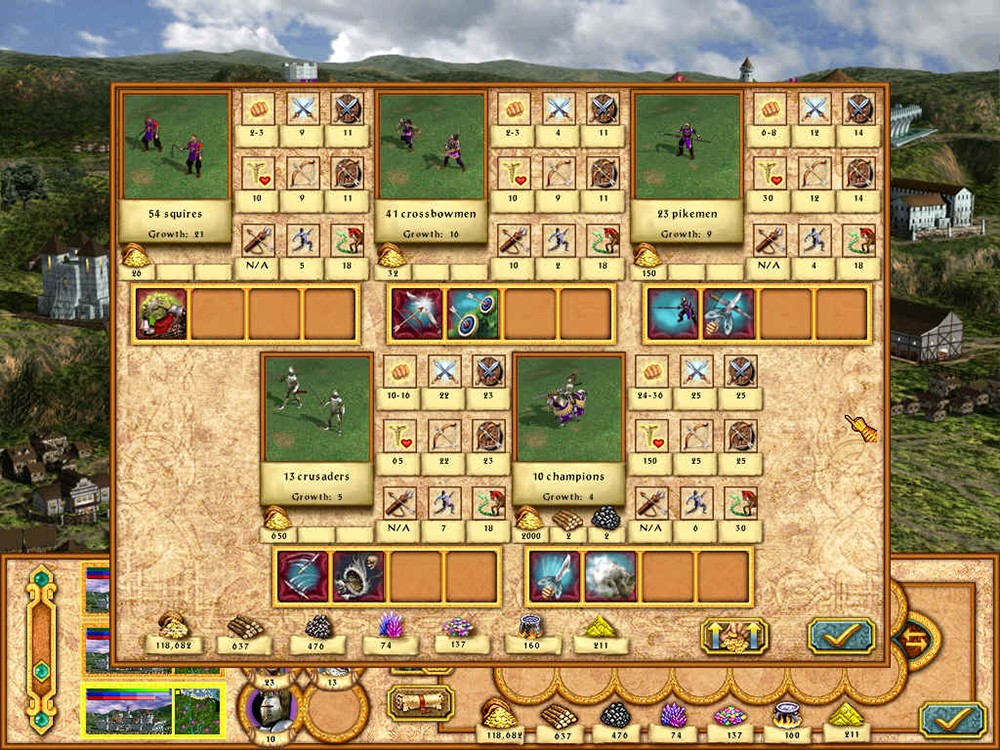 The role-playing aspect gets bumped up by allowing your heroes to change class based on the skills picked up. However, there is such a slim selection of skills, it is very easy to find your niche skill selection, and always have that. This game is infamous among fans. New World Computing tried something different, but failed to fully satisfy. I assume their main goal for this title was versatility, but they kept it all so small scale, that it wasn't versatile in a way that would be fun... for very long. 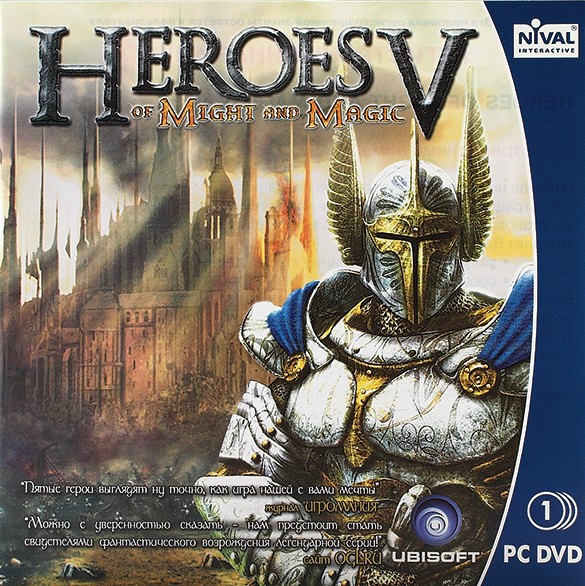 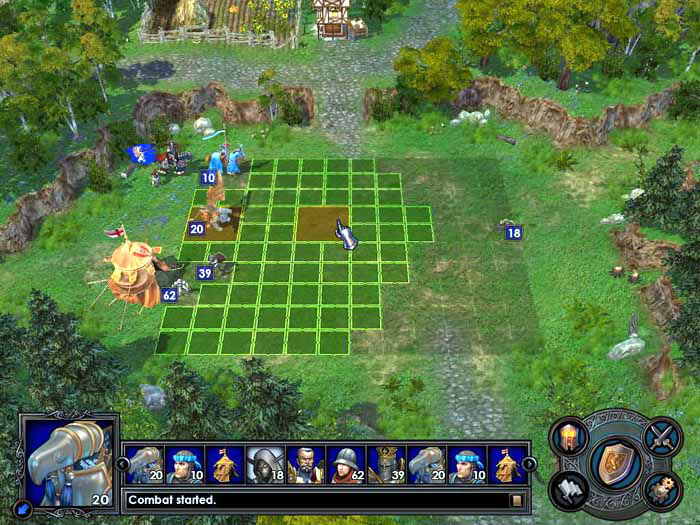 What's different about Heroes of Might and Magic V that makes it great are those few stylistic changes. It is the first game in the series to take place fully in 3D, and a few of the factions are unprecedented. The Dungeon town now belongs to the dark elves. Oh yeah, I should mention that the nature of the factions changes again in this title, as they are not focused on a hero, town, or paradigm, but each faction is built around a specific race. The Sylvan (previously the Rampart and Sorceress town) now belongs entirely to the elves, and their woodland allies. There's the Dark Elf faction, a faction entirely of dwarves, and the wizards have taken on a full middle-eastern twist. I also feel like this game got the role-playing aspect of the hero down the best. There are a multitude of skills, some with very unique effects, and they differ by faction as well. So now, while each faction has only one type of hero, each hero can become immensely different from all the others. 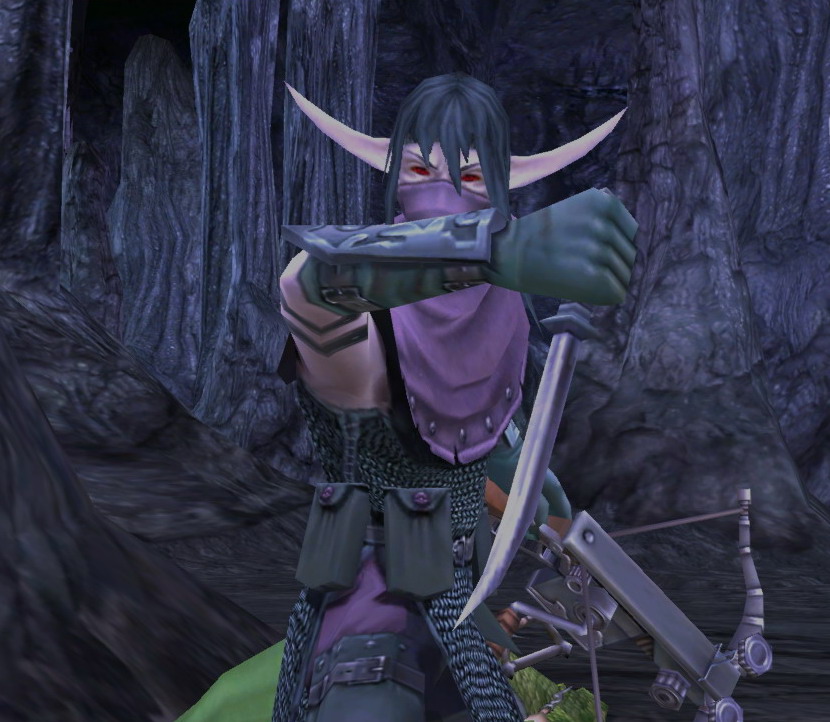 But what really dragged this game down (besides being really buggy on release) was its plot. There are entire blogs making fun of the plot. It is very difficult to make deep, character driven stories when you need excuses for the heroes to attack every living (or undead) creature they come across. But what really marks its downfall, is that each faction was given a religion, and sometimes these deities play into the plot, and other times they don't. This created multiple plot holes, and raised so many questions. Combine that with the terrible choices each and every character made, and you have yourself a mess of a story. Ignore the campaign, and definitely get the expansion packs. The second one brings extra versatility to the game by providing alternate upgrades for every creature.

I think most fans treat this one like they treat Heroes of Might and Magic IV. It is the producers (again Ubisoft) trying to play around with what they have, and ultimately failing. Creatures, this time come in only three levels: core, elite, and champion. The total number of factions in this game are six (one added via the sole expansion pack.) And a few staples of the series are missing. 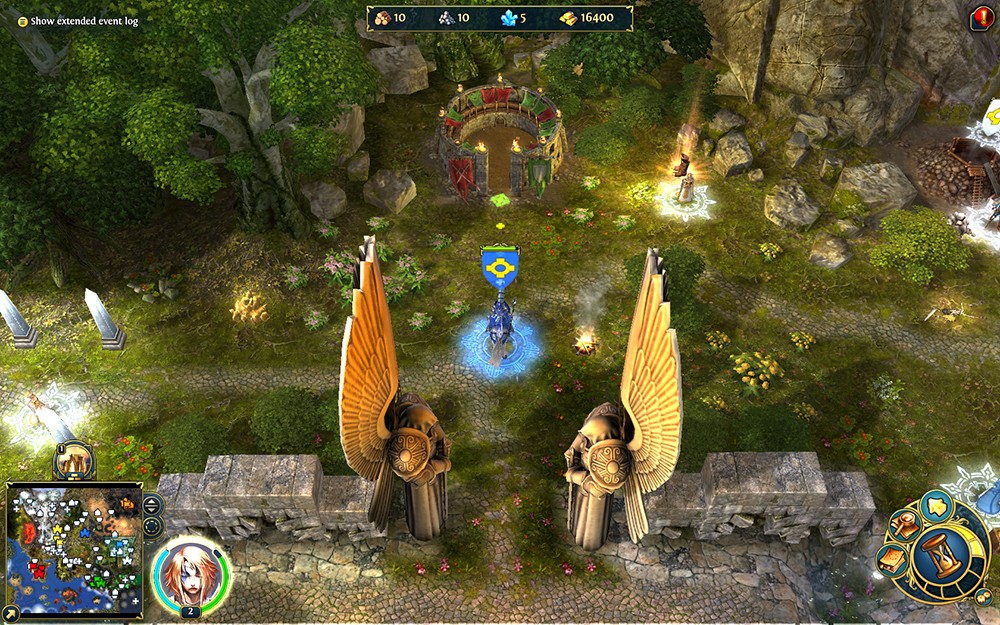 First, and least damaging, the Haven/Castle/Knight town has been turned into an almost expressly 'angel' town, there is no Sylvan/Rampart/Sorceress faction, nor a Wizard faction. Next most damaging is skill selection. Unlike every previous game, skill are purchased from a level up, as opposed to chosen from a random selection. This leads to a lot of the customization problems of Heroes of Might and Magic IV-- you build the same hero every time. But further damaging that aspect is that spells are not learned, they are purchased along with the skills. But then, there is even less variety among the creatures, as many have the same or similar powers. Others have the same or similar sprites. Wrap that all up with a very buggy release and you have my least favorite game in the series by far. I got bored of this fairly quickly and never touched it again. Like I said at the beginning, this is a series with a very interesting story, one with many changes, twists, and turns. That, unfortunately, makes it very long too. Thank you for bearing with me.   Photos via: Google
Tags: Heroes of Might and Magic, New World Computing, Ubisoft, Video Games