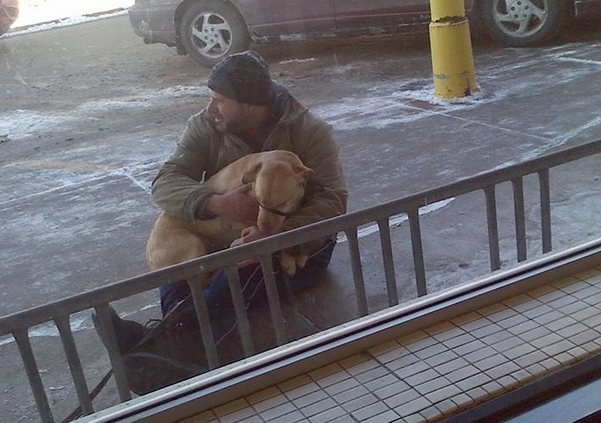 Last week, a photo of Winona citizen Allen Campbell hit the popular website Imgur and exploded. The photo features Campbell sitting on the ground in -25 degree weather, comforting a cold yellow Labrador. With nearly half a million views and countless comments, the picture has started a firestorm. People are hailing Campbell as a hero while condemning the pet’s owner for leaving her dog outside in such conditions. I reached Campbell for an email interview to see what he had to say on the matter. Minnesota Connected: What was your initial thought when you saw the dog outside? Campbell: I didn't notice the dog until after I was in line and heard people talking about how cold the dog seemed to be. MC: Was the dog shivering? Did it look like it was in danger of the cold? Campbell: The dog was uncomfortable... shivering and picking up her paws up and down. I’m assuming her paws were cold. Again, the dog was probably uncomfortable, but I am doubting there was any danger, but I’m no expert. 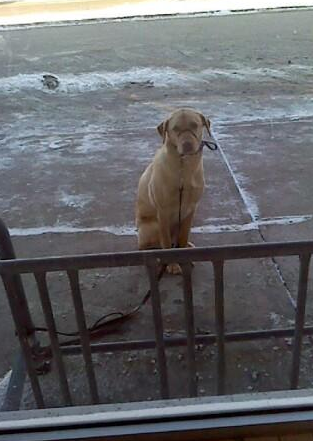 MC: What made you decide to go out and comfort it? Campbell: I decided to go out because I felt sorry for the dog, and the guy behind me was willing to save my place in line. MC: Did the owner have anything to say when she retrieved her dog from outside? Campbell: The owner said something along the line of, "She is a very friendly dog and will let strangers pet her." She was very nice lady. MC: What was your reaction to discovering the photo went viral? Campbell: I came home after working a night shift and a Facebook friend messaged me asking if I was the guy in the photo with the dog outside the post office. At this point, I had no idea what she was talking about. She sent me a link to the website where the picture was posted. I was overwhelmed by all the hype and irritated by all the mean comments about the owner. I tried defending the owner when people made mean comments on Facebook but I was afraid to post anything on the original site because I had never heard about the site and did not trust the site. I was amazed by the views and how fast people were hearing about the whole thing. MC: What would you say to those who are placing judgment on the dog’s owner and calling you “a hero”? Campbell: Hero... ha! I love petting dogs. The picture just added a lot of drama. The owner, at most, made a bad choice that day and underestimated the long line at a post office, but I doubt the dog was anything more than a tad uncomfortable. People who had no idea of the situation blew the situation way out of control. Our local paper (Winona Daily News) wrote an article about the harsh comments and defended the owner, but I feel the paper failed to also take advantage of an opportunity to inform the public on the dangers of cold weather and pets. I feel the real story is people tend to say things behind the cover of the internet that they would never say to someone's face. The dog was fine after Campbell warmed her up and her owner brought her home. Labs have a double coat that helps to protect them from cold, but even that can’t work wonders in 25 below zero. They can get frostbite on their ears, feet, and tail, and a lifting of the paws (which Campbell mentioned the dog was doing) is an indicator that this may be occurring. While Campbell remains humble about his decision to comfort the pet, the internet had rallied behind him, calling him “an angel" and “the most incredible man.” One comment from Imgur user AllMYCommentsAreReferences states, “THIS GUY deserves an actual, physical medal for this.”   Here is the original post on Imgur. If you'd like to read the Winona Daily News article. For tips on how to protect your pet from the cold, visit: The Humane Society   Photos via: Imgur
Tags: News