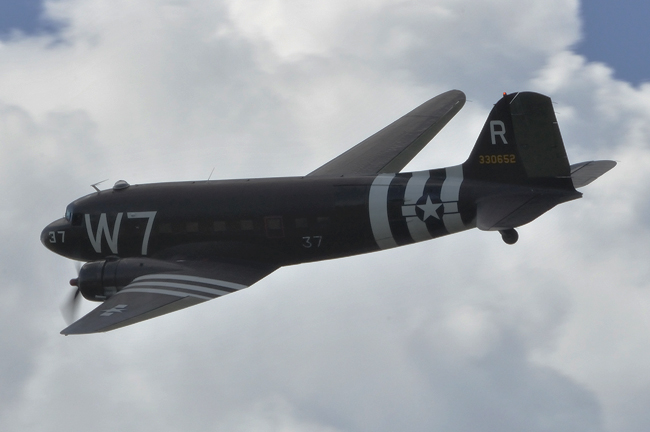 Perhaps the most famous day of battle in World War II history is D-Day -- the assault on the France coastline left a lasting impact on all involved and all who care. But one veteran is returning to the infamous beaches of Normandy. That veteran is Whisky 7, a Douglas C-47 airplane. Whisky 7 flew on D-Day and dropped units from the 3rd Battalion, 505th Para Infantry Regiment, 82nd Airborne Division over the town of St. Mere Eglise. Whisky 7 was one of the few planes that dropped its troopers on target resulting in the quick liberation of St. Mere Eglise in 1944. The plane continued to fly throughout the war and even towed gliders for Operation Market Garden. In 1945, Whisky 7 was sold and converted into a DC-3 airliner, being used by several airlines until being sold again to a private interest in 1993. The plane was eventually donated to, and restored by, the National Warplane Museum in Geneseo, New York. The museum has raised $250,000 to fly Whisky 7 back to Normandy via an impressive tour. They will fly from Geneseo, to Maine, to Labrador, to Greenland, to Iceland, to Scottland, to Germany, and finally to France. This tour is set to help commemorate WWII, D-Day, and the veterans -- even the mechanical ones.   Photo via: barnstormers.com
Tags: News, Whisky 7, WWII