The Star Wars era hasn’t ended yet. With The Force Awakens and Rogue One behind us and Star Wars: The Last Jedi quickly approaching, not to mention the announcement that Disney will be spearheading another trilogy removed of Skywalkers, it's pretty obvious we’re still in the thick of it. Not only that, but we’ve received a new blockbuster cinematic spawn in the form of “Cinematic Universes,” all thanks to Marvel Studios. Sorcerer, a movie based off the novel “The Wages of Fear,” had the unfortunate kismet of being a dark, existential film released a month after Star Wars, a movie inherently positive, upbeat, and light-hearted. As you might imagine, it met the box office with an enthusiastic bellyflop. It received mixed critical reviews at the time and was such a financial disaster, it pretty much forced William Friedkin, the auteur director of The French Connection and The Exorcist, out of Hollywood. This must be why I had never heard of Sorcerer before up until about a month ago. I’ve watched more movies than most and obsessively study movie history and follow movie news. Not knowing a movie like Sorcerer existed was shocking to me. With a desire to right this wrong, plus a piqued curiosity, I quickly checked the movie out from my local library and watched it.

Some don’t entirely blame Star Wars for Sorcerer’s demise. Many who went to see the film in theater complained about it being a “foreign film” and walked out. This confusion is understandable as I had the exact same thought when I first saw it. The dialogue in the opening sequences is all in different languages set to subtitles. It didn’t turn me off but, still, I don’t blame theatergoers for having this assumption. Others complained about the title itself. With a title like Sorcerer, the idea of an epic medieval fantasy comes to mind, not a gritty film set in the jungles of South America. This, too, I can understand. Though, admittedly, I was drawn in and loved the title. Regardless of who’s to blame, Sorcerer’s failure is a tragedy. It’s a fantastic film, undeserving of its box office flop, its early critical reviews, or it's quick toss into the obscure film trash dump. We can be glad Star Wars removed us from our troubles and ushered in a new era of hopeful filmmaking, but perhaps now is the time with our current social and political climate to wake up from our daydream and face reality. With that, Sorcerer is a nice splash of cold water. Sorcerer is mostly a tale of survival. Following four different men from Mexico, Israel, France, and the United States, each ends up in the remote village of Porvenir in Latin America, running from their past lives and mostly living in poverty. When a dangerous job requires them to drive two trucks of poorly stored nitroglycerin 200 miles across the jungle to stop an oil explosion, the four men must work together to survive and finish the job.

I can hear it already. That old refrain, “I don’t want to watch a depressing movie. Life’s hard enough already,” becomes tiring. Just because life is hard doesn’t mean we shouldn’t absorb uncomfortable art that forces us to grapple with uncomfortable issues. In fact, those films shake us from our current stupor of mindlessly embracing remakes, reboots, and endless regurgitated sequels. It also might help us deal with the current social issues of the day. It’s been four decades since Star Wars released. Since then, we’ve had plenty of time to escape. Much like Jaws or Apocalypse Now, Sorcerer is one of those magical (if I dare use such a word) Hollywood 70’s films with plenty of horrific behind the scenes stories to tell. Many of the practical special effects are so daring and ballsy, you’ll seriously wonder how in the world they were able to pull it off without dying. The bridge scene is easily on my top ten list of favorite movie scenes.  This real-to-life movie making adds an authenticity to the films white-knuckled tension, a tension that only grows as the story unfolds. That’s not to say the film doesn’t have its slower and quieter moments. But, when you’ve got highly explosive TNT in the back of your truck, it’s going to be a bumpy ride. 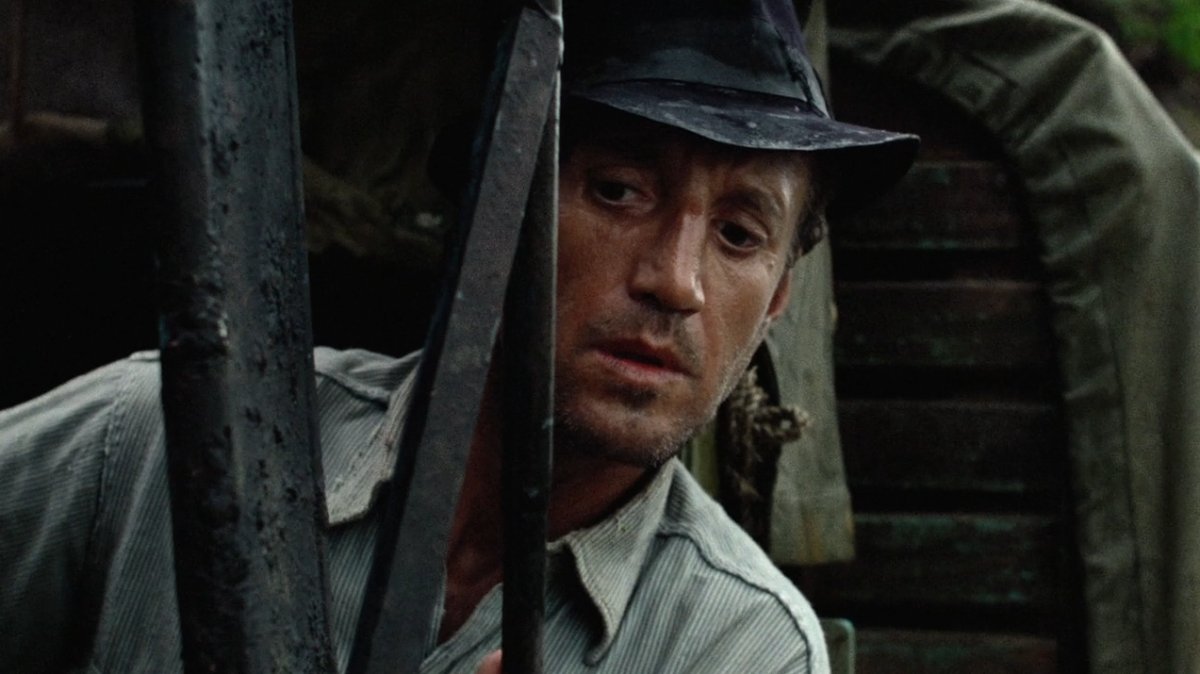 More importantly, the subtext in Sorcerer is rather profound if not entirely poignant. Four strangers must trust in each other to survive the impending cataclysmic explosion from the rotting TNT sticks in the back of their truck. At every turn, fate (The Sorcerer) throws horrific problems on the road like swamps, shabby bridges, and trees. Regardless of their differences, these men know they have a job to do and if they get it wrong, they all die. Consider how most of humanity deals with each other every day. Many of us are total strangers, going about our lives, intersecting and meeting serendipitously. Sometimes this requires nothing of us and other times, we’re forced to work together. On a grander political scale, many foreign leaders are total strangers especially with democracies electing new leaders all the time. With countries like the United States and North Korea going head to head and pushing us closer to nuclear war, the TNT sticks, so to speak, are itching to blow up the truck. In other words, for humanity to survive, we have to have a level of faith and trust in each other even when we have no idea who the person is. Much of the time this isn't pretty. In Sorcerer, the four men rarely get along and are constantly at odds. There's rarely any happy, budding camaraderie, but that's what speaks to the heart of our condition and also pours on even more tension. Look, I, like pretty much everyone, want to see Star Wars: The Last Jedi. I’ve been a fan of Rian Johnson’s work for a while and think he could potentially elevate the series. At the same time, this is Disney we’re talking about. It’s unlikely they’re going to mettle with a tried and true formula. It's more likely The Last Jedi will mimic The Empire Strikes Back and not step too far out of bounds. But, I digress. None of what I’m telling you is to boycott Star Wars. You have a grand experience watching Jedi Knights duke it out with fire swords. I know I will. A part of me, though, believes Sorcerer deserves its day in the sun if not for the gravity of the message then at least for the quality of the story. So, when you’re done basking in the glow of the Force, perhaps go to your local video store or library and check out Sorcerer. A film that deserves our attention when many abandoned it so many years ago because they were too caught up in Star Wars to care.
Tags: Movies, A New Hope, film review, Movie Review, Roy Scheider, Sorcerer, sorcerer movie, Star Wars, Star wars the last jedi, the empire strikes back, The Force Awakens, The Last Jedi, The New Hollywood Movement, William Friedkin