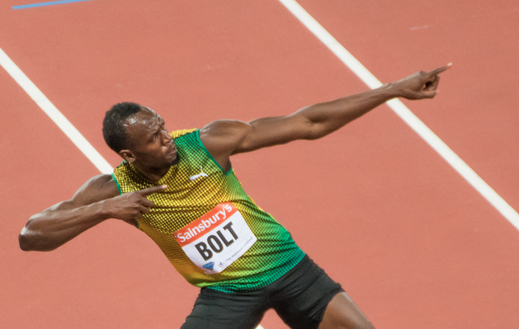 Last month, over 300 young, aspiring football players from all over the country made a pilgrimage to Indianapolis to be measured and tested in every conceivable way. The NFL Combine, held annually in February, features college football’s top players competing in a series of drills designed to help NFL talent scouts and coaches separate the contenders from the pretenders in preparation for the upcoming NFL Draft. While the week-long spectacle offers a potpourri of physical (and mental) tests and challenges — vertical leap, broad jump, bench press reps at 225 lbs, something called the Wunderlich — the premier event of the Combine is the 40-yard dash. This year, J.J. Nelson, a wide receiver from UAB, ran "the 40" (as NFL super fans have dubbed it) in 4.28 seconds, the fastest time among all participating NFL hopefuls. Watching the 40 got me thinking... I wonder how the world's fastest man — Jamaica's Usain Bolt — would fare in the NFL Combine? How would he stack up against J.J. Nelson, and all the top 40-yard dash performers from Combines in the past? Here is a list of the ten 40-yard dash performances in NFL Combine history: These guys are fast. But Usain Bolt is obviously faster, right? I mean, Bolt’s the fastest man in the history planet earth — surely he would outrun a bunch of football players... Right?

Since Usain Bolt never competes in a 40-yard event, it’s impossible to get a perfect apples-to-apples comparison and definitively answer our question. As far as I can tell, the best we can do for our purposes is use Bolt’s fastest time in his shortest race. While competing in Berlin in 2009, Bolt set a world record of 9.58 seconds in the 100-meter sprint. From there, it’s pretty straightforward: Find out how fast Usain Bolt ran the first 40 yards of his 100-meter world record and compare that to the best NFL prospects’ times. Here is a graph of Bolt’s 2009 100-meter sprint in Berlin, with 10-meter splits (Click it to bigify):

One meter equals 1.09 yards, so 40 yards is 36.58 meters. According to the data, at 36.58 meters (or 40 yards) Usain Bolt’s time was ~4.35. Simple. Wait. 4.35? Usain Bolt is slower than the top football players at the 40-yard dash? Well, it certainly looks that way at first glance. But there is at least one major factor we’ve yet to consider in the analysis: Reaction time. In an Olympic style track race — like Usain Bolt ran in Berlin in 2009 — runners’ starts are triggered by the sound of the starting gun. No matter how quick an athlete's reflexes are, it still takes some time for them to react to the gun and start the race. Compare this to the NFL Combine, where an electronic timer starts at the exact moment the player starts his sprint. Due to this fully automated timing system (or FAT, as is it is commonly referred to by the NFL super fans), football players at the Combine have a relatively significant advantage over sprinters in a comparison. To put this factor into the particular context of our current discussion, Bolt’s reaction time in 2009 was 0.15 seconds. Subtract that from his calculated 40-yard dash time of 4.35 and you get 4.20, which would rank him ahead of J.J. Brown, Chris Johnson, Rondel Melendez, and every other official time in the history of the NFL combine.

So…Usain Bolt is faster than the top football players? Well, yes. But wait. There’s a bit more. While the difference caused by reaction time is likely the most significant factor at play, there are a few additional variables to consider in this analysis: These may all seem like insignificant factors, but remember we are dealing with tenths and hundredths of seconds in our comparison. The actual impact of each variable on a 40-yard sprint is difficult to calculate (and might be negligible), but it is reasonable to conclude that four of the five factors favor Bolt.

So Are Football's Fastest Players Faster Than Usain Bolt in the 40-Yard Dash?

No. I don't think so, though it's much closer than I expected it to be when I started looking into the data. I think it is fair to say the 40-yard dash is not Usain Bolt's ideal race. Take another look at the graph: Relatively speaking, Bolt is a pretty slow starter. At 6' 5", his strength as a 100-meter sprinter appears to be during the last 50-60% of the race, when his long frame allows him to reach a top speed that no one can match. At the 40 yard mark in a race, Bolt is still accelerating. So, maybe someday (soon) we'll have a football player show up to the Combine and run a sub 4.2 40*, at which point we can re-open this debate. In the meantime, I think Bolt is still the fastest man on the planet even at 40 yards, if only by a few hundredths of a second.   *If this happens, then the Raiders will draft this dude immediately, regardless of his ability as a football player. (The NFL super fans know what I'm talking about.)   Media courtesy of: J. Brichto -- PhotoBobil -- YouTube
Tags: Sports, 40-Yard Dash, NFL Combine, NFL Draft, NFL Football, Usain Bolt