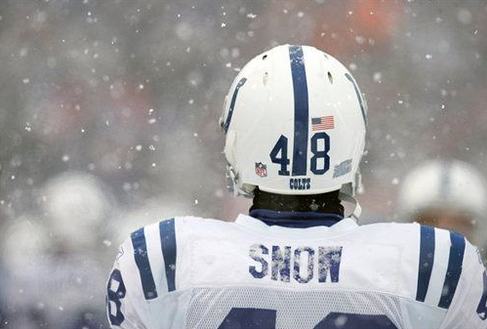 Of all the things in the world that are true of Minneapolis, Minnesota currently... one thing that truly is NOT true, is that it is too damn hot for a penguin. It's hard for me to even joke or be light-hearted about winter, because it essentially ruins my life every year. I hate it so much I don't even want to talk about it. But I guess that's why god created football. Am I right or am I right?!

According to weather dot com, this Saturday (perhaps this very moment as you’re reading this!) it's going to be exactly 80 degrees warmer in Tampa, Florida than it is going to be here in the Twin Cities. Whenever the topic of winter and how I feel about it comes up with people at work and such, people always invariably ask me: “You know... have you thought about living somewhere else?” To which, my response is always along the lines of: “What am I gonna do? Buy a plane ticket to Tampa, Florida and when I get there, clap my hands together and announce to the crowd of strangers: 'Well, I'm here! Now, can somebody please give me a job, a place to live, and maybe some food? Also, I have absolutely NO money, so I can't really wait on these things.'” Story of my life. 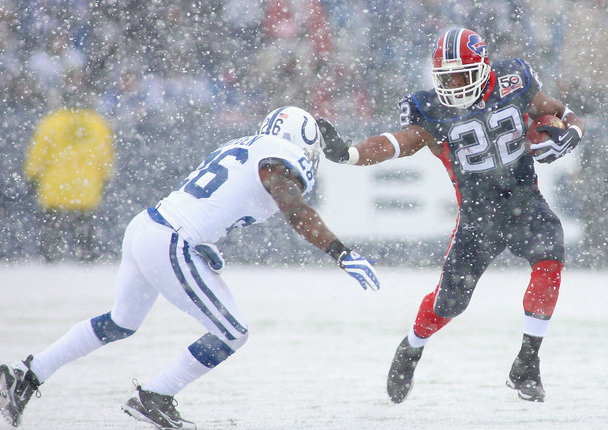 As for the game, this bad boy features two of the three teams that are leading the NFL with seven blown leads resulting in both of them snatching defeat from the jaws of victory seven times in twelve of their games. If you're in a format that allows betting on a game while it's in progress, I would advise you (as your football attorney) to bet the farm on whichever team is trailing heading into the 4th quarter, as the other is sure to blow it. Other than that, what it really comes down to for me, is who can I take seriously in this game? A bunch of swashbucklers on a sinking ship with some sort of ape-clown for a head captain and a quarterback I still pretty much never heard of? Nah. The Bucs had their nice little three consecutive wins to go above and beyond avoiding their franchise's own 70's version of the original winless team... but that's all done now. I can't look this team in the eye and even be serious with this motley crew. Whereas, on the other hand... William Frederick "Buffalo Bill" Cody is a man I take very seriously. He and I have spent long hours at the local saloons discussing the aesthetics of hunting bison and cowboy showmanship. Why, he pret' near taught me everything I know, I tell you what. Winner? I reckon the Bills, son. (Wink and tongue-clicking sound)

At the time of writing this piece right now, it is currently 58 degrees warmer in New York City than it is here. Do you know when it's really cold, by the way? When your car door won't close (because it's too cold for the pieces to latch) and you have to drive all the way into work holding it “shut” with your left hand and steering with your right. If you've never had that experience before, you find the words “I hate my life” running through your mind on a continuous loop for the entirety of the commute. 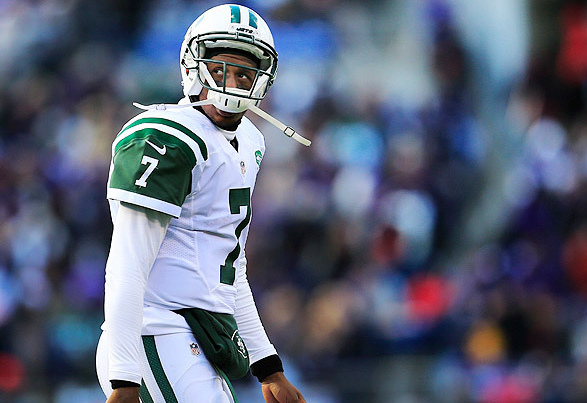 But more importantly, ladies and gentlemen, if you would please direct your attention for a moment to take a glance at the train-wreck that the New York Jets have become. Have I not vehemently refused to believe that they wouldn't become this?! Why, the Jets have gotten to losing so much they've forgotten what life's all about – winning every other time! Well, they've lost three in a row now and the jig's up, see. And I hate to sit here and hate on a playa, but their quarterback, Geno Smith: A) hasn't thrown a touchdown in the last five games, B) hasn't completed ten passes in any of the last four games, but C) is actually the best QB in the NFL at completing passes to the other team with 19 completions on the season to the other team. "Obviously, he's going through some rough times," his head coach, Rex Ryan says. Rather! Meanwhile, the Raiders almost beat the Cowboys on Thanksgiving. And… they almost beat the Giants five weeks ago when they played the G-Men in this same stadium. Good enough for me! Winner: Raiders

It's only going to be a high of 46 degrees in San Francisco on Saturday, and that doesn't necessarily seem completely awesome, I guess. But that's still going to be 48 degrees warmer than what it is here! So, every coach always says: “This is the most important game of the season for us...” “we take it week to week...” “this is the only opponent on our schedule right now...” so on and such forth for every game they play. 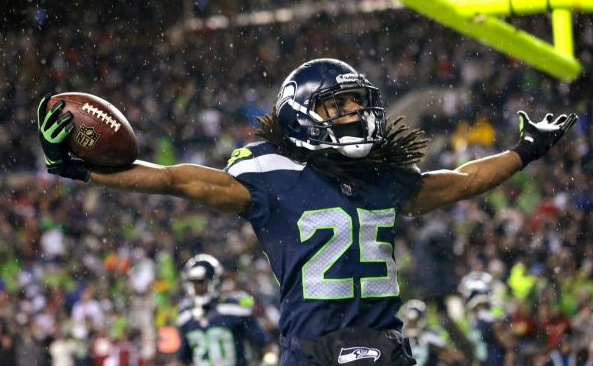 But this game right here between the Hawks and Niners is actually it. If Seattle goes into San Fran and leaves with a win to sweep the season series over the defending NFC champs, a week after annihilating the Saints, the result of this game would have definitive ramifications for both teams, and it would effectively be the end of the season for the NFC. Here's why: For San Francisco, a loss in this game would not only mean that they would no longer be a “great team” – it would also drop them all the way down to “also-ran” status. They might still make the playoffs, but they would be an after-thought heading into it. For Seattle, they will have unequivocally proven they are an entire level better than everyone else in the conference and as such, will be going to the Super Bowl, case-closed. As a fan of the NFL, I'm not ready for this to happen yet on either front. I am neither ready to bury the Niners nor am I ready to think of Seattle as this unbeatable super force of unstoppable domination. Now, if Seattle wins this game... so be it. But I'm taking the stand I need to take in this one. Winner: 49ers 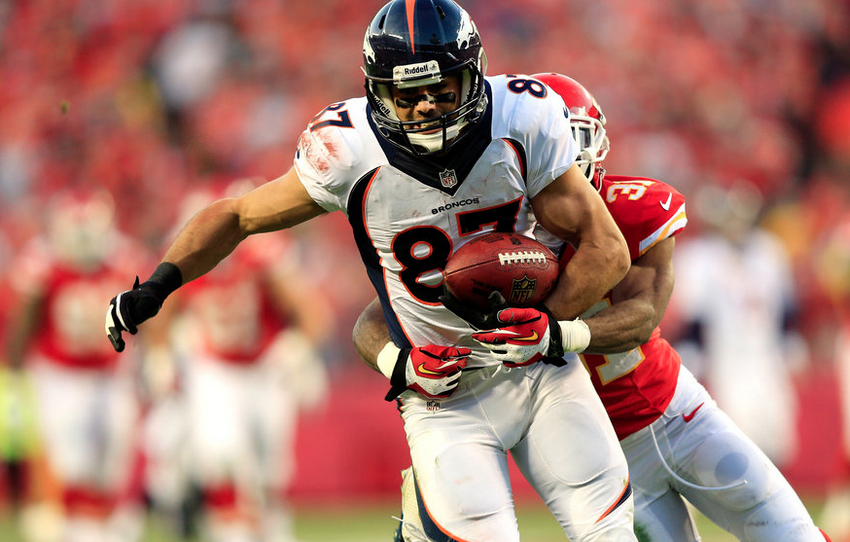 Well, it's only gonna be about 5 degrees warmer on Sunday in Denver than here, but they have those glorious, doomed Rocky Mountains to look at and ski on. All we have that's keeping me here is our glorious lakes. And the only thing lakes are good for in the winter here is ice fishing. Do I look like an ice-fisherman to you people?! I'm a lake swimmer, okay? I'm closer to being a fish than being a fisherman of fish. I'm the one in the water. Not the one in the boat or fish phone booth or outhouse, or whatever the hell it is. The football point is: Like Gandolf returning to the Fellowship on the 4th night from the East in the battle for Helm's Deep, John Fox now returns to his mighty Broncos for this matchup with the orc-ish Titans. And vastly more important to me, I have my shot at $7,000 earth human cash money dollars riding on Denver this week, and I very badly and desperately want them to win this game. And I think they might, because they seem to be a decent football team from what I've heard. For those of you that would be so kind as to cross your fingers for me – I love you, and god bless. I'll see you on the other side! Winner: Broncos

Good lord, it was even 13 degrees warmer in Green Bay than it was here today! Gawd, I'm literally living in my own personal hell! 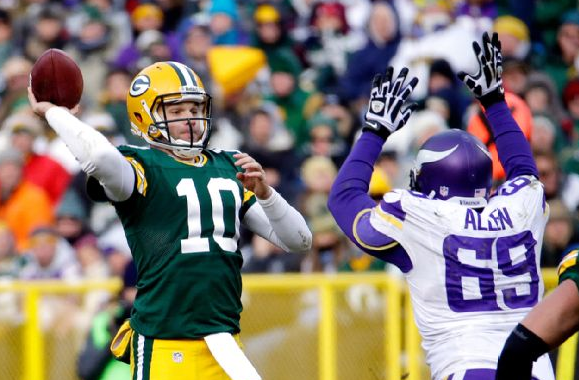 Speaking of personal hells, though – do you happen to know any Packer fans? I mean, they are so totally, completely terrible without Rat Boy (the dancer)! They're as bad as us, for pete sakes! (I'd love to say they're worse than us, but that stupid tie kinda mucked everything up. We're both equally terrible – let's just call it the tie that it is). I mean, this doesn't even seem like it should even be an upset, but I'm taking the pampered and sucky Falcons to beat the Packers in LAMBEAU... in DECEMBER. And I really didn't even have to think about it – that's how bad the Packers are! Oh man, such righteous good times. Up top! Winner: Falcons P.S. When the Falcons get back home to Atlanta on Monday, it’s going to be 56 degrees warmer there than it is going to be here, in Hell, Hellsota, United States of America. Photos via: Google
Tags: Sports