The Simultaneous Rise and Fall of Michael Bay

Last Summer, Minnesota Connected sat down with a couple of the stars from the upcoming Transformers: Age of Extinction movie a couple weeks before it's debut. The film—the fourth in the franchise—went on to earn nearly $1.1 billion in worldwide box office revenue. It was the highest grossing film of 2014, and the twelfth highest grossing film of all time. Despite it's world-beating financial success, the movie was obliterated by critics (including our own)...This is director Michael Bay in a nutshell. If you don't recognize his name, you'll likely recognize his movies. Bay has directed some of the most well known films of the last 15 years: the Transformers series, Bad Boys 1 & 2 starring Will Smith and Martin Lawrence, Pearl Harbor, Armageddon, The Rock. His unapologetically over-the-top, explosion-filled style has become his distinctive calling card, earning the 50-year old director the devotion of countless fans and condemnation from most critics. In fact, what is interesting (to me) about Bay's now two decade long career directing major Hollywood action films is his ever increasing ability to draw large audiences and earn big revenues while simultaneously creating an increasingly bad product according to the critical consensus. I graphed the ten movies Bay has directed since 1995. On the vertical axis, Bay's films are graphed according to their overall score on Rotten Tomatoes, a very popular aggregating media review site that rates films from 0-100%. The size of the dollar sign-filled bubbles represent the amount of money each of the films earned. 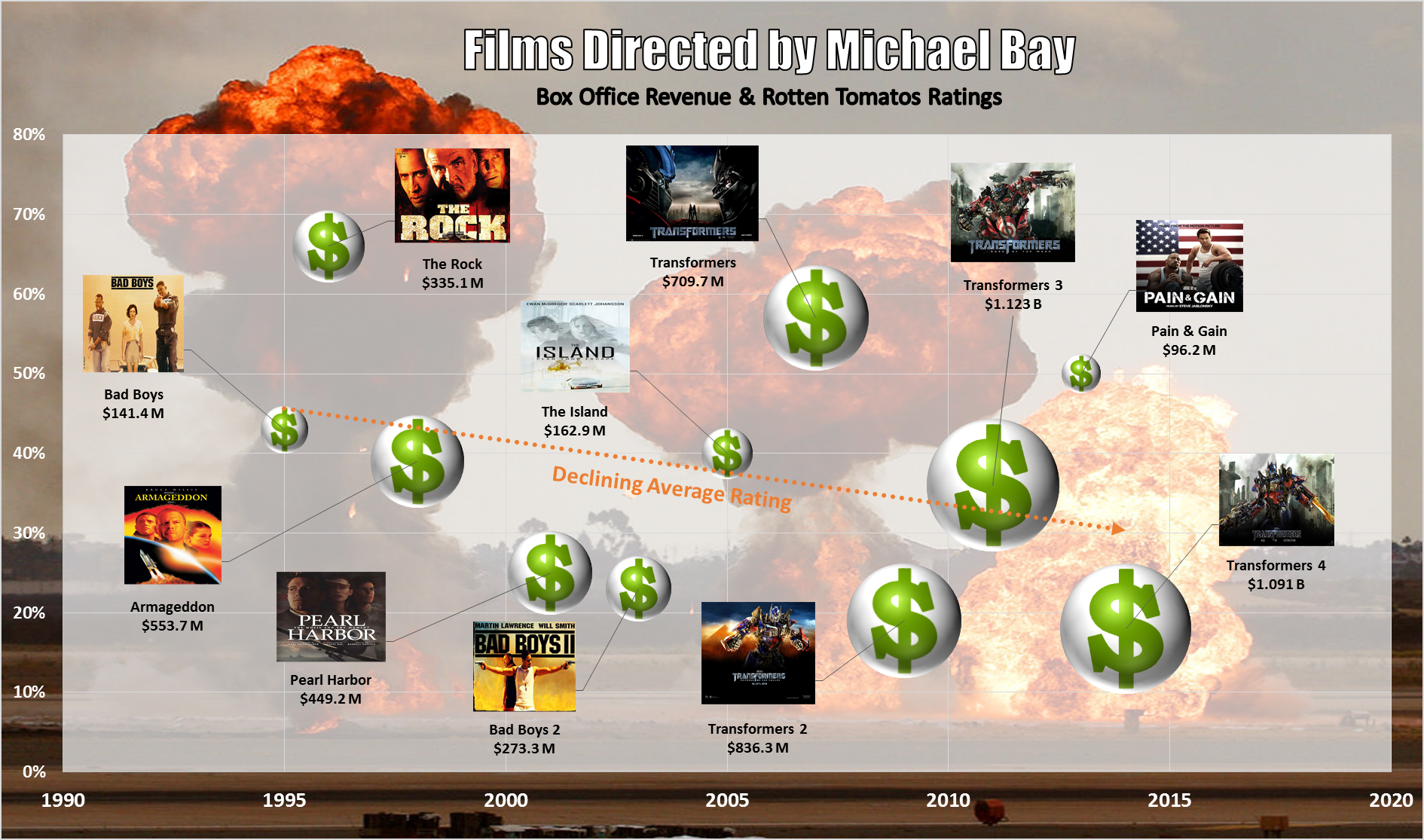 As you can see, in the eyes of movie reviewers, Bay is steadily declining over time, hitting rock bottom critically with last summer's Transformers: AoE (currently 18% on RT). Based on box office revenue, however, Bay's career is ballooning to absurd levels of financial domination with each film he directs. The last three Transformers movies earned a combined $3.1 billion, placing Bay in the pantheon of Hollywood's highest earning directors...despite the critical awfulness of his recent films. When looking at the data, it's seems almost as if the worse his films are with critics, the more money they make among the moving-attending public.

It's a Shame & The Transformers Sequels Are to Largely to Blame

Obviously, despite critics' opinions, Michael Bay has figured out the formula for making money making movies. And it's too bad. While Bay collects inflated paychecks, movie goers miss out on what could be really cool films. I mean, Bay can make good movies. It's not like he doesn't have the talent. The Rock, Armageddon and The Island were all entertaining films in my estimation. I thought Pearl Harbor, though unloved by critics, had some enjoyable moments. I've not seen Pain and Gain, but it received some relatively positive reviews. Hell, even the first Transformers movie in 2007 did pretty well critically. Looking back at the graph, it's largely been the three sequels to that first Transformers film that have come to solidify Bay's reputation as that guy who makes mindless, big budget action flicks with fetching young lead actresses and way too many explosions. It's as if the billion dollar box office revenues he's enjoyed have enabled him to make lousy movies. Bay knows he can take a ~$200 million dollar budget and churn out a healthy profit using his proven and cliché formula —Why bother rocking the boat by trying to produce a cinematic gem?

Where is this Headed?

If my math is correct (it is), Bay's career is careening down an ominous (though lucrative) rabbit hole. According to some sophisticated calculations and projections, in the Summer on 2052, Bay will direct a film that grosses $1.8 billion while earning a perfect 0% rating on Rotten Tomatoes. Yes, at this pace, Michael Bay is on a course to direct the worst rated, and simultaneously most profitable, film of all time when he is 87-years old. The data do not lie. 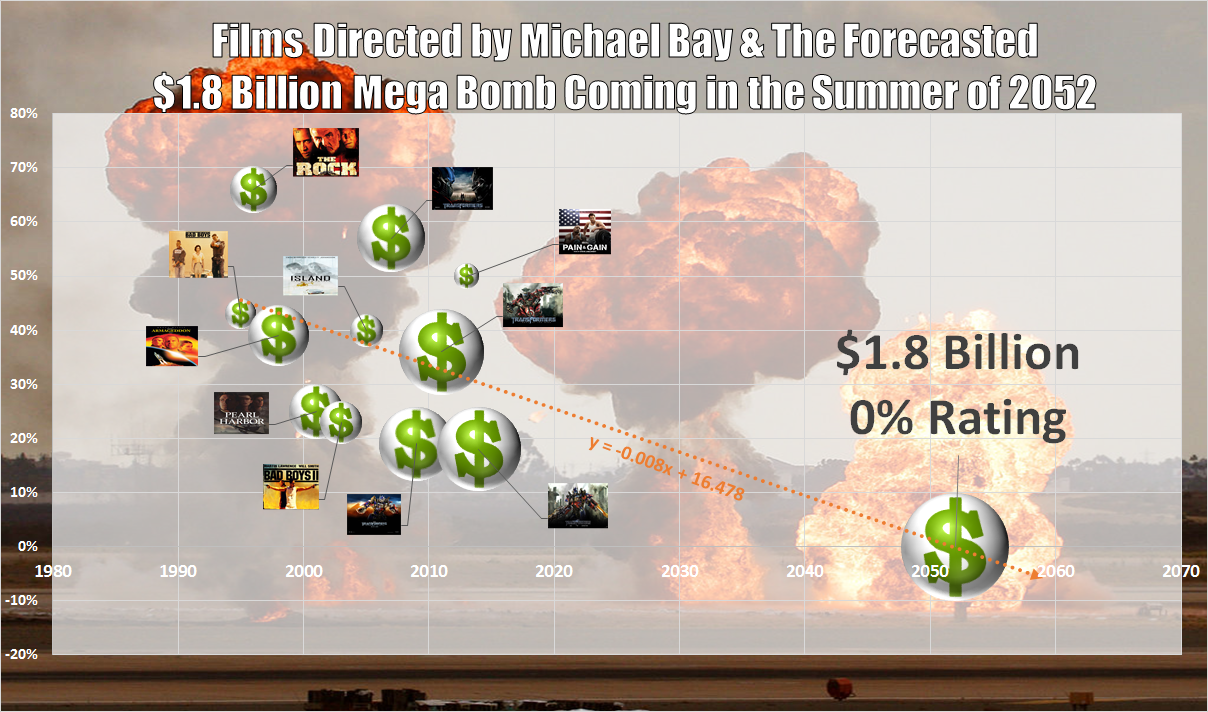 Stop back to Minnesota Connected over the next few decades for upcoming news on the film, which will invariably be a sequel, probably in 3D, involving loads of big guns, bigger explosions and 360-degree spinning camera shots.   Images by: Wikipedia Commons -- Brent Lee
Tags: Movies, Data Vizualization, Michael Bay, Transformers, Transformers: Age of Extinction