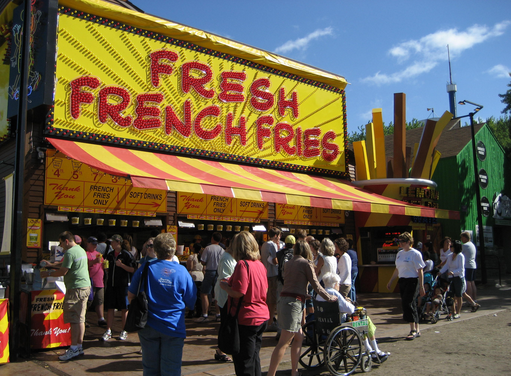 The Minnesota State Fair is one of the largest events the state hosts each and every year. This year started off the same with healthy attendance numbers, but the fair experienced a big dip as the temperature and humidity reached unseasonable territory. The worst attendance days were early in the week, but yesterday was a huge turnout for the event, with 117,480 attending compared to the just over 101,000 last year. This day alone helped the numbers in attendance bounce back from the dip of the previous few days. The fair's attendance was looking gloomy to start the week. On Sunday, Monday, and Tuesday, comparing numbers from last year, those three days collectively were down in attendance around 100,000 visitors from last year. I know the heat and humidity are to blame, because one thing is for sure, most people are miserable in this weather. Very few want to subject themselves to this torture when they are supposed to be enjoying everything the fairgrounds has to offer and eating a whole lot. Even food vendors reported the drop in sales (well, not the guys selling cold water) -- not only was the lower attendance affecting people purchasing food, but the heat dissuades patrons from buying certain food items. When it feels like 100° F, who wants a bucket full of Sweet Martha's Cookies and milk? The same could be said for scalding hot french fries, a trend Fresh French Fries is trying to combat by adding misting fans at their booths to cool their customers. Many others have followed suite, with misting stations popping up all over the fair, from vendors,  to radio stations, to alcoholic beverage establishments. I was at the fair on Wednesday midday, and it was like a "ghost town" in terms of fair attendance. But as the night began to creep closer, the sun began to hide behind clouds and the temperatures dropped. As my group left the fair around 6, it appeared more people were coming in than going out. Personally, the evening is usually when I get to the fair -- there is less sun, usually less people (especially families with children, which increases congestion), and much cooler temperatures. As the fair moves into its final days, don't let the heat beat you into submission. The fair has plenty of ways to stay cool, including "stay cool" towels sold in the Grandstand. Or, if you don't want to fight the heat, just go around 5 or 6 pm, after the day begins to cool -- this still gives most plenty of time to eat up and soak in all the fair has to offer.
Tags: News, Minnesota State Fair