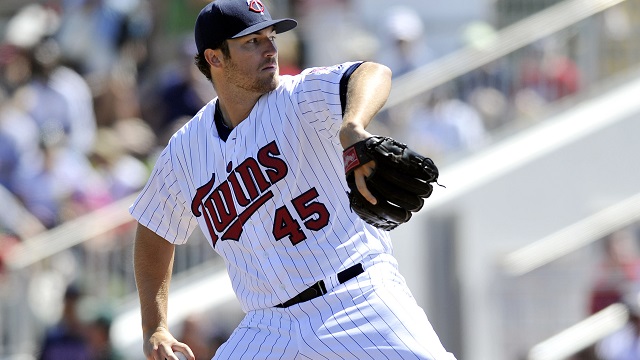 The Minnesota Twins should have a solid rotation for at least the next three seasons. Earlier this week, the Twins and Phil Hughes reached a contract extension that keeps him in a Twins uniform through the 2019 season. The deal, which is worth $58 million over the remaining five years, surpasses the four-year $55 million deal that Ervin Santana signed earlier this month -- it is the largest contract for a Twins pitcher. Hughes’s original contract that he signed after the 2013 season was for $24 million for three years. The new extension has him making an additional $1.2 million over the next two seasons, making it $9.2 million instead of $8 million. For the remaining three years of the contract, Hughes will make $13.2 million per season, making the extension worth an additional $42 million. Last season, Hughes had his best year of his career. In 209 2/3 innings, Hughes had a record of 16-10, an ERA of 3.52, 186 strikeouts and 16 walks. He set a new MLB single-season record of 11.63 strikeout-to-walk ratio and had a Major League best 0.7 walks per nine innings. Generally, players who have signed big contracts usually don’t live up to the expectations of that contract, However, from what was quoted on the Twins Baseball website, I believe Hughes is here to be successful and see this team succeed as well as collect the big bucks.

"From what I saw last year, we have the makings to be a good club," the right-hander Hughes said. "I didn't want it to be where I came in for three years, kind of saw this team get back on the right track and then said, 'Thanks for everything. Thanks for having faith in me, but see you later. I wanted to be part of this for years to come, and I believe in the process and the direction that this team is going. I'm just very excited that I know I will be a part of that change."

The Twins figure to have at least four of the five starting rotation spots filled for the next three years with solid starting pitching. However, the key is they all live up to the expectations. Kyle Gibson figures to improve from last year. Ervin Santana should be a major contributor. However, Ricky Nolasco needs to step up and improve from his 5.38 ERA in 27 games last season. The way things look on paper, the Twins should have a solid starting rotation for the next three years and Phil Hughes will play a major part in making the rotation successful. The key is the pitchers perform to what they are capable of.   Photo via: Twins Daily
Tags: Minnesota Twins, Phil Hughes, Sports